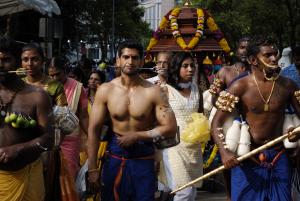 With the possible exception of scrolling through Twitter, it’s hard to imagine an activity less conducive to mind-body health than shoving metal spikes through your cheeks before walking up a steep mountain path in shoes made of nails. Yet during the kavadi attam ritual – part of the annual Thaipusam festival of Tamil Hinduism – innumerable people eagerly do exactly this (and worse) as they process up a hillside to the local temple of the god Murugan. Some worshipers  drag massive chariots from hooks embedded in their backs. Many carry enormous, 100-pound altars. But these acts of grievous bodily self-harm don’t seem to impair the performers’ health. In fact, a recent paper shows that, by some measures, the kavadi ritual actual improves it.

The paper in Current Anthropology, “Effects of Extreme Ritual Practice on Psychophysiological Well-Being,” reports an experimental anthropology study of impressive complexity. Working in the island nation of Mauritius, the paper’s authors, led by anthropologist and experimental methods expert Dimitri Xygalatas (whom readers of this blog have met before), tracked physiological measures of health in a sample of local men before, during, and after the kavadi ritual. (Only men typically perform the most painful ritual acts such as extreme body piercing.) About half of the subjects participated in the kavadi, and the other half either didn’t attend or were observers only.

To record health data, the participants wore a specialized armband device for three weeks before the ritual, one week during the festival itself, and for three weeks afterwards. The device collected continuous, real-time data on variables such as skin conductance and physical activity levels, as well as on sleep quality, expressed in terms of “disturbances” (tossing, turning, or getting up during the night). To supplement these data, the researchers also collected daily heart rate data with a blood pressure monitor.

When cross-correlated with demographic information such as age and body mass index (BMI), these physiological and activity-level data gave the researchers a window into the overall health of each participant. Socioeconomic status was measured using educational attainment, household wealth, and occupational prestige. The subjects also filled out questionnaires to assess depression, anxiety, quality of life, and self-assessed health (how healthy one subjectively feels at a given time), both before and after the kavadi ritual.

To capture the extremity of ritual pain, the researchers counted the number of piercings each kavadi ritual participant inflicted on himself. Interestingly, these observations showed a bimodal distribution: most participants either had only one or two piercings, or more than 100. Few participants went for a middle ground.

The authors’ experimental predictions were cautious. Given that previous research has shown some beneficial effects of social rituals, they predicted that any physical costs of the kavadi ritual (such as pain, injury, and extreme exertion) would tend to balance out against its positive psychological and social consequences, implying that there would be no long-term negative physical health effects from the ritual. They also predicted that the kavadi ritual would have significantly positive effects on psychological health, and that marginalized members of the community would partake in more extreme versions of the ritual in order to build stronger, more reliable social ties.

The results largely, though not uniformly, supported the authors’ predictions. Unsurprisingly, physiological measures went through the roof during the day of the kavadi ritual: both skin conductance (a measure of sweat response) and energy expenditure spiked during the middle of the day, as ritual participants approached the temple high on the mountaintop (many with nails digging into the soles of their feet). And while many of the participants boasted dozens of piercings and pulled heavy chariots with hooks in their backs, the physiological data showed no negative health effects in the wake of the ritual.

In fact, skin conductance and heart rate measures actually improved in subsequent weeks. However, since the two conditions (ritual participant versus nonparticipant) didn’t significantly differ from one another, these changes were probably due to chance. So while there weren’t any measurable negative physiological effects of the kavadi, there weren’t any clear positive ones, either.

However, ritual participants did rate their own quality of life and self-assessed health significantly higher than nonparticipants in the weeks following the festival. And the more painful their method of performing the kavadi, the stronger this effect was for self-assessed health. A suggestive but non-significant trend also cropped up for stress experienced during the ritual, as measured by skin conductance.

Ritual participation and pain had no effect on anxiety or depression, but “floor effects” may have been responsible for this finding – that is, the respondents reported very low levels of self-reported depression and anxiety in general, and so there was very little variance in mental health responses across participants. Essentially, everyone in the study was so well-adjusted that the data couldn’t show an effect on depression or anxiety even if there had been one.

In terms of demographics, kavadi participants from lower-SES backgrounds were indeed more likely to have many piercings, in line with the authors’ predictions. Those with chronic illnesses were also marginally (though non-significantly) more likely to be in the high-pain group. However, the small numbers of subjects in these analyses led the paper’s authors to caution that these demographic findings might not be reliable.

The results might seem a little anticlimactic. All that fancy measurement and equipment, only to show that the kavadi ritual had no robust effects on hard measures of health? Well, remember that the authors only predicted that the kavadi’s grotesque bodily mutilation wouldn’t cause any measurable long-term harm to participants. Count that hypothesis confirmed.

How You Feel Affects How You Are

But the effects on self-reported health are more important than they might seem. Decades’ worth of medical studies have shown that self-reported health – how people or patients subjectively feel about their own well-being – is one of the most powerful known predictors of concrete health outcomes, including mortality. That is, your own overall rating of how healthy you feel in general is a strikingly accurate index of how likely you are to, say, wind up in the hospital, come down with serious illness, or even drop dead in the near- to mid-term future.

This insight lends the Current Anthropology findings more heft. Participation in a bloody, dangerous, outrageously grueling religious ritual – at the height of the tropical summer, no less – somehow leads to more positive ratings on a measure that predicts all-around health with impressive accuracy. This is interesting.

The authors’ theoretical rationale for exploring extreme rituals’ impacts on well-being hinged on the fact that, across cultures and societies, elders and other respected authorities often prescribe difficult or even dangerous rituals as remedies for illnesses and trouble – particularly when it comes to mental disturbances. The Silicon Valley mentality – with its effusive praise of novelty and mistrust of tradition – might not like to admit it, but if something that odd and apparently counterintuitive is that common around the world, there just might be something to it. The authors phrase it a bit more cautiously, writing that

age-old cultural practices that seem risky, unpleasant, or dangerous can have real-life consequences for their practitioners by utilizing pain and suffering as strategies of resilience.

This study traverses the eerie borderlands between objective biomedical science and subjective cultural interpretations of health. Hard-nosed readers might want to know how the ritual concretely affected participants’ health, independent of any subjective and unreliable interpretations. And it’s possible that a larger sample would have shown significant effects of the kavadi ritual on  the physiological measures.

But in any case, people’s interpretations of their health can’t actually be isolated from the facts. If a ritual makes people feel more socially networked, competent, and courageous, those subjective impressions can have very real effects on health. In the case of the extreme aspects of the kavadi ritual, the authors point out that

the cost of participation can have important self-signaling functions. On the one hand, it can boost performers’ perceived fitness and self-esteem, which positively affects mental health. On the other hand, through a process of self-justification, such costs can strengthen one’s attachment to the group and sense of belonging.

In other words, simply making it through a difficult, onerous ritual like the kavadi can powerfully boost the social confidence and subjective self-efficacy of participants, in turn leading to better functioning and a host of positive social effects afterward. In this way, a rite that, on the surface, looks absurd, dangerous, and irrational – a ritual we can easily imagine colonial administrators summarily outlawing for its apparent barbarousness – is actually a crucial part of the economy of well-being in its own cultural context.

Of course, it’s not like secular Westerners don’t have their own harrowing equivalents. Ever been to a CrossFit gym, or talked to a marathon runner about her most recent race?* These extreme physical activities are, at least to an outsider’s eye, just as purposeless and arbitrary as the kavadi ritual, and – for all we know – more likely to result in long-term injury. But people love running marathons. The physical agony, the confronting of the very limits of endurance amid a crowd of emaciated fellow sufferers: marathon running has many of the hallmarks of extreme ritual, and the quasi-placebo psychological benefits to boot.

The main difference, in fact, might be the fact that the kavadi ritual is embedded within the much larger religious system of symbols, myths, and cultural practices of Tamil Hinduism, whereas (in the West) marathon running is just another way for people to pursue a personally meaningful challenge.** In other words, marathon running might look like a religion, but it’s decidedly not part of one.

While gory photographs of the kavadi attam ritual might seem stomach-churning, tens of thousands of people the world over participate in it without suffering significant harm, and this research shows that they probably even receive benefits. With its piercings, nails, and chariots, the kavadi is a particularly eye-catching illustration of the age-old principle that hard things are often rewarding because they’re hard. Especially when they take the impractical, opaque form of a ritual that’s impossible to explain to the uninitiated, and which asks for tremendous sacrifices from mortals.

* This is a bit of narrative license. You don’t have to talk to marathon runners about their running. They talk to you.

** I kid, I kid! I have many friends who are marathon runners, and I am very happy for them. I show this support by making sure there’s just a little more room on the road for them, every day.
—–

November 23, 2019
Videos on War and Painful Ritual
Next Post

January 28, 2020 Why Humans Imitate. And Imitate. And Imitate.
Recent Comments
0 | Leave a Comment
"I think with hindsight we have to say that Trump enabled Putin's invasion of Ukraine ..."
Barros Serrano So Long, Pax Americana
"Thank you for sharing you can download Spotify Premium APK completely free here : https://coimobile.com/spoti..."
cory coru day The Natural History of Music
"Connor, have you perused the Biologos website yet? Biologos is an organization largely of evangelical ..."
Heather G Mashal Faith and the Evolutionary Predicament
"...give it some reasonable thought, eh? While Russia commits an ongoing war crime against Ukrainian ..."
Michel So Long, Pax Americana
Browse Our Archives
Related posts from Science On Religion