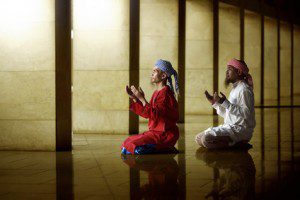 Religion sure seems to care a lot about self-control. From the Ten Commandments to Shariah law to rule-bound Zen monasticism, most religious communities impose tremendous restrictions on their members. (Not for them the wide-open ethos of “If it feels good, do it.”) Yet despite their dreary-seeming, duty-oriented value systems, religious adherents tend to be slightly happier and longer-lived than their nonreligious peers. What gives? In a new paper, I spend a lot of pages arguing that religious constraints on behavior and elevated personal well-being are actually inextricable from one another, because following all those rules builds self-control – one of the best predictors of life outcomes. The catch? The very practices that build self-control are the same tools religions use to discriminate against outsiders.

The paper, which appeared online in the journal Religion, Brain & Behavior last month, takes its main argument from two well-established empirical findings about religion. The first is that liberal religious communities tend to die out and lose followers over time, while more conservative denominations fare better. (I’ve written about this before, here.) The second is that regular religious attendance is correlated – modestly, but reliably – with better mental health. This second effect isn’t big, and it’s not as strong in secular Europe as it is elsewhere, but it’s still widespread enough to be worth trying to explain.

I started out by wondering whether these two tendencies – the robustness of conservative religious communities and the religion-mental health connection – were connected at all. After all, there’s pretty good evidence that adherents of conservative traditions are a bit happier and less prone to mental distress than liberal believers. Hence, the factors that produce the positive correlation between religion and mental health might be more common in conservative religious traditions than liberal ones.

So what’s one characteristic that conservative churches have more of than liberal ones? Economists have a good answer: costs. Conservative denominations typically make more demands – impose more requirements – on their followers than liberal denominations do. Contrary to what you might expect, conservative churches grow and stay strong not in spite of these extra costs, but in part because of them. “Strict church theory” argues that steeper costs filter out potential free riders. (They’re called “free riders” for a reason: they don’t want to pay any steep costs. Impose costs, and free riders disappear.)

In the paper, I take this theoretical base and add a detailed description of exactly how belonging to a high-cost community can lead to slightly better mental health over time. My key claim – which I borrow from others, including psychologists Michael McCullough and Sander Koole –  is that paying the costs of belonging to a religious community progressively builds greater self-control.

Why? Because the costs of belonging wouldn’t be costs if they were intrinsically rewarding on their own merits. They have to take some effort.

A good example is fasting. If you’re Muslim, you’re obliged to fast from sunup to sundown during some of the longest and hottest days of the summer. Sure, you could probably get away with refusing to fast – but if you did, you wouldn’t be seen as a core member of your local mosque. So if you want to be a Muslim in good standing, you have to choose the harder thing. You have to choose fasting.

Another example: at most Eastern Orthodox Christian churches, parishioners are supposed to stand for nearly the whole Sunday service. If you’ve ever dropped in at an Orthodox church, you know that this can get uncomfortable, real quick. After 45 minutes, your feet ache. Your back hurts. Of course, you could always just sit down on one of the benches that line the sanctuary. But if you sit out for too long, you’ll be less likely to gain the respect and welcome of the congregation. Visitors get some slack, naturally, but would-be members really do face tacit social pressure to stand.

In other words, if you want to belong to the group, you have to prove that you’re game belong to the group. You have to signal your commitment. The logic of investment signaling (or “costly signaling,” as it’s known in the cognitive and evolutionary study of religion) dictates that the only way to convincingly display your commitment to the group is to perform rituals that otherwise wouldn’t be your first choice, because they’re difficult, tedious, time-consuming, or energy-demanding. So each time you want to show your commitment – whether it’s fasting for Ramadan or just showing up on time for Sunday mass – you probably have to say “no” to some preference of your short-term reward system. You have to exercise a little self-control.

The next step is this: according to most psychologists, exercising self-control actually builds self-control over time. There’s been some controversy recently about how exactly this occurs, but there’s enough evidence that it does occur that it should be fairly uncontroversial.

In real life, people often build self-control because their social contexts don’t offer them a choice. You could be someone with fairly weak self-control when you first convert to, say, Mormonism, but if you want to stick around, you essentially have to develop self-control or risk washing out of the religion. In this way, regular religious practice leads to slightly better long-term self-control, which in turn is a very strong, predictor of positive life outcomes, from better family relationships to more accomplishments and achieved personal goals.

But there are some caveats. First, you have to actually be committed. If you claim that you’re a believer but you never attend a mosque, temple, or church, then you’re probably not performing any difficult rituals, and so you’re not building self-control. This accounts for the fact that nominal religious affiliation doesn’t predict mental health outcomes very well – or at least not as well as actual religious attendance.

Second, the more central your role in the community becomes, the more you’ll benefit from a high social status in the group – and the more self-control will be required of you. You’ll have more responsibilities and obligations, but more people will look up to your example, which will boost your self-esteem. Perhaps more importantly, you’ll have more incentive to keep meeting the expectations of the community. If your reputation is at stake, do you really want to be the last one stumbling in late to church? No, you don’t.

So I’m arguing for a graduated model of how religion affects well-being, with a lot of feedback loops. The more you signal your commitment, the more others expect you to signal. The higher your status, the more responsibilities you have – so you can’t afford to let your self-control slip too much. But with more at stake (including your reputation), you learn to take the longer-term view more often. Instead of thinking about how good it’ll feel to lie in bed for ten more minutes (a negative incentive), you think instead about how rewarding it’ll be to show up to teach Torah lessons on time (a positive incentive).

In other words, as your social status changes and you accrue more obligations, your personality starts to change – subtly, but noticeably. A number of recent studies have documented this effect in secular contexts, by showing that people become more conscientious and more agreeable after taking on major new life responsibilities, such as starting a career or having children. (Importantly, this effect isn’t just a biological function of raw age, because it happens earlier in societies that impose adult roles at younger ages.)

And guess what? Conscientiousness and agreeableness are the two personality traits most consistently associated with religiousness worldwide. Religious people also tend to be a bit more conservative than the nonreligious, and conservatism is strongly associated with conscientiousness and following social rules. In fact, you could argue that there’s something like a unified “conservative-religious” personality profile, defined by low openness, high agreeableness, and high conscientiousness. There are endless exceptions to this in real life, of course, because our models aren’t reality. But there’s enough truth to this model that it’s still useful.

In a word, I’m arguing that religion tends to turn people into rule-followers, and that rule-followers tend to be a bit happier than rule-breakers.

These claims aren’t especially new, of course. What is new is trying to precisely describe the feedback loops that run between social investment, commitment signaling, and religious belief, and how those feedback loops interact to encourage the development of a religious-conservative personality. It’s a dynamic system, not a linear cause-and-effect chain – whether it’s a good thing or not.

But it’s not clear that it’s actually a “good” thing. Keep in mind that the entire reason that religious groups ask members to pay high costs in the first place is to discriminate insiders from outsiders. So there are overtones of classical tragedy here. The very thing that makes religious groups strong and effective at catalyzing self-regulation is the root of one of their worst aspects: the imposition of boundaries between Us and Them. After all, costly signaling strategically exaggerates the difference between committed insiders and no-good outsiders, in order to keep out free riders. The better a religious community is at cultivating this ingroup/outgroup boundary, the more effective it’ll be at providing benefits for members.

So the fact that religious practice can boost mental health isn’t a knockdown argument in favor of religion. It’s more complicated than that. If my model is even a little accurate, human self-regulation is a function of group membership. We’re evolved to live in delineated groups that impose obligations on members, and because of this we’ve also evolved to rely on those social obligations for a lot of our own psychological self-regulation. This is straight out of Émile Durkheim. But Durkheimian social dynamics are morally neutral: they regulate and stabilize people, bind groups together, generate meaning in life, oppress low-status folks, and create ingroup/outgroup divisions all at the same time. And that’s why arguments about religion’s secular benefits shouldn’t turn into proxy debates about whether humans should believe in God – even though that’s often what happens anyway.

Read the paper abstract here. Email me at connorpw@bu.edu if you want an access code for the full article. It’s a target article with commentaries, so there’s some nice juicy debate following the main essay.

I’ll also be presenting a computer model based on this research at the International Association for the Cognitive Science of Religion meeting in Vancouver later this month. If you’re there, come by.

Also: I’ve mentioned this before, but I have a blog going at the Huffington Post now, where I write a lot about (1) computer modeling and (2) ritual. Feel free to drop by.