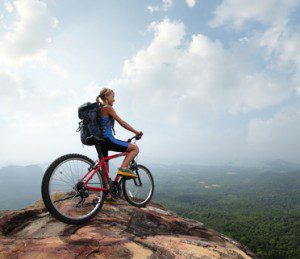 Last week, I reported on a bit of research that suggested, in part, that many religious nonbelievers come to their atheistic worldviews after being convinced that science explains the world better than religion does. But despite its admittedly jaw-dropping explanatory power, science does, in fact, have its limitations. Science cannot explain or predict everything (sorry, E.O. Wilson). These limitations, however, don’t necessarily imply that atheists or agnostics should become theists. Instead, they imply that we should reside more fully in our own bodies – the subjects of the rich sensory impressions and first-person experiences that are ultimately the source of all knowledge.

First, let’s get the usual objections out of the way. So science is imperfect. But isn’t that only an artifact of today’s limited technology, methods, and theories? Assuming constant advancements in our technological know-how and theoretical acumen, won’t science someday predict and/or explain absolutely everything – consciousness, biological death, dark matter, American Idol, what will happen to the weather in Buffalo if a butterfly flaps its wings in Beijing,* the whole kaboodle?

No. Seriously, science can’t explain or predict everything. And it never will. This is not because the universe is mystical (although it could also be that, if you’re into such things), but because it is literally impossibly complex.

Scientific knowledge is theoretical knowledge. As philosophers of science such as Mary Hesse and Nancy Cartwright† have pointed out, scientific knowledge relies heavily on models and analogies, and the theorems that drive any model are necessarily simplified compared with real-world scenarios. The result is that any scientific model, theory, or representation is always imperfectly applicable to the real world.

WAIT: READ THE FOLLOWING PARAGRAPH BEFORE GETTING ALL HUFFY

This does not mean that scientific theories are somehow false. In general, they are not. Clearly, Einstein’s gravitational constant, or the electron-shell model of the atom, or Darwin’s theory of natural selection, capture something quantifiably real about the world. So good theories are retained for a reason: they work.

But of course, scientific laws and theories are, by definition, generalizations (as my friend and professor Bob Neville recently pointed out in a conversation). They attempt to provide general rules that shape and inform all the particular events in the world. Newton’s inverse-square law of gravitational attraction, for example, predicts what will happen if you drop a bowling ball out of an airplane,** but it also applies to any other particular instance of gravity drawing two bodies toward each other: a blue-green planet in Andromeda orbiting a red giant, a piece of old newspaper floating to the ground after being whipped out of the landfill by the wind, a Somali immigrant in a high-rise in Minneapolis walking down the 30 flights of stairs one footfall after another. Each of these extremely particular things is covered under Newton’s law. Gravity’s sprawling generality neatly fits these particulars.

But – and this is the key – it only covers them partially. Each of these particular events is also guided by countless other laws: laws of thermodynamics, of fluid dynamics, of social dynamics, cognition, physiology, and meteorology. And plenty of others that I wouldn’t know to mention.

Consider the Somali immigrant in Minneapolis, slowly walking down the stairs toward the street. Let’s say he’s a man named Abshir. Abshir arrived in Minnesota in 1997 and has a wife, Filsan, and a 12-year-old son, Galad. Abshir has a tiny a limp due to a soccer injury he suffered as a young man, right after he arrived in Minneapolis – he played with other new immigrants on a pitch in the Cedar-Riverside neighborhood, overlooking the roaring freeway.

Right now, Abshir is walking down the stairs of his high-rise public housing tower instead of taking the elevator because someone in the building has pulled the fire alarm, and the elevators are frozen. The ringing of the alarm is echoing through the narrow chamber of the 30-story stairwell.

This is a science blog, but I’m getting all literary and narrative on you for a reason. This is to drive home the particularity of real life: Abshir is a particular person in a unique and unrepeatable situation, and there are no theories, no matter how complex, that can tell you exactly where each of Abshir’s feet will fall as he trudges the stairs, that can explain the ultimate origin of each of his thoughts and anxieties as he makes his way downward, or that can predict the precise millisecond when he will emerge from the dim, horrifically loud stairwell onto the sunlit street.

Again, this is not because there are no theories or models that address these questions. There are. Neuroscience could look at patterns of neural firing in his frontal cortex, parietal cortex, and cerebellum to get a pretty good idea of how he is negotiating the physical task of walking. Cognitive science and psychology could map his thought patterns and come up with a model for his cognitive habits, allowing an improbably well-informed researcher to make predictions of what Abshir might be thinking.

But because real life is so stupendously complex, the causal chains leading to any particular occurrence, thought, or movement are, functionally, so vast and intricate as to be finally invulnerable to theoretical capture. This applies to human behavior and physical systems alike. You cannot gather up enough theories and models to predict the full reality of the world.

The physicist and theologian John Polkinghorne paints an exceptionally clear picture of life’s ultimate invulnerability to theory. As a physical system, Polkinghorne claims, reality is so surpassingly complex and sensitive that it is literally impossible to precisely predict the outcome of even the smallest events:

Molecules in a gas behave, in many ways, like small colliding billiard balls. After less than a microsecond, fifty or more collisions have taken place for each molecule. After even so few collisions the resulting outcome is so sensitive that it would be affected by the variation in the gravitational field due to an extra electron on the other side of the universe.

Uh, wow. Remember the butterfly effect: very small initial changes in a complex system lead to vastly differing final outcomes at a global or higher level. The change in the position of a single molecule of gas could, literally, magnify upward to change how a weather system moves, what decision a person a person makes, even whether nations decide to go to war. And each millisecond, molecules and interactions across the universe are being affected by the most unimaginably minute influences. This means that, literally, the only model that could predict or explain real events with absolute precision would be a model the size of the universe itself.

Obviously, this is impractical.

Just as it is silly to create a useful map of the United States that’s scaled 1:1 (for one thing, you would need a really big chunk of real estate to store it††), it doesn’t make any sense to imagine a scientific model that could account for every factor that might affect the outcome of any physical interaction. To be useful, models must be simplifications: they must be maps, not territory. And as Polkinghorne reminds us, the territory of the universe is pretty damn big.

This doesn’t mean science is a failed endeavor. It’s clearly not. (Citation: we have been to the moon.) But it means that the models, theories, and generalizations that are the tools of science can never grip the world perfectly. Reality will always, in the final analysis, slip out of the predictive and explanatory straitjacket of human science.

Now, I am not setting you up in order to say, “Therefore, God.” That would be a dumb thing to do. It would also be intellectually indefensible. Instead, I am merely cautioning that because science consists of mental and theoretical abstractions, we have an obligation to return as often as possible to the basic source of all our information about reality: the experience of being a body living on the earth.

What do I mean? Go outside. Watch the people walking past, or the clouds streaming across the sky. Pay attention to the details: the feeling of the air on your skin, the rippling of the leaves of a tree in the wind, the smells of the earth or the city or the sea. Descend into your evolutionarily produced, carbon-based animal body and actually feel things.

As you watch the mundane happenings of the world pass by your eyes, realize that not a single theory or model, no algorithm of science, will ever predict the precise contours of the cloud hovering above the building nearby, or the exact moment when a young woman walks by holding a red purse and closes her eyes in the sunlight. Reality, in other words, is spontaneous, as the philosopher David Abram has pointed out. If you settle into your senses, you’ll recognize this. And it will be liberating – extraordinarily so.

I’m not going soft or hippy-dippy on you. This isn’t woo-woo stuff. It is the basic experience of perception. What I’m saying is that the epistemological foil of science is not religion, as so many people erroneously think. Instead, the complementary opposite of science is embodiment.

Science, as a human project, abstracts from the world and produces generalities. These generalities are extremely useful and predictive; they capture real regularities in the world. But in order to do its abstractive work, science requires us to step away from the raw experience of living so that we can reflect on it. It puts the immediacy of living on “pause,” and in so doing breaks our connection with actual reality. In return, it gives us very useful and fantastically powerful models and ideas about the world.

But models and ideas are not reality. Only reality is reality. To recognize that, we need to be intimately acquainted with our bodies and their various sense perceptions, with the spontaneity and lack of predictability that defines genuine sensory experience. Go sit somewhere outside and listen to and watch the world, and you’ll see what I mean. Don’t get trapped in the models that science produces, in other words. Use the models. But don’t let them use you. This holds for atheists, religious believers, agnostics, and everyone around and in between.

Note: The French mathematician Pierre Laplace once imagined a demon that knew the position and velocity of every particle in the universe. This demon could then produce a perfect set of predictions for what would happen in every succeeding instant, everywhere, for eternity. I’m arguing that we are not Laplace’s demon and could never be. Now stop reading and go outside already.

† No, not that Nancy Cartwright.

** If you try this, do not mention this blog post at your arraignment. Thank you.

†† Such as Siberia, which is closed for most of each year due to weather and would therefore be a frustrating place to keep reference materials.

October 25, 2013 Trust issues? The answer might be rhythm
Recent Comments
48 Comments | Leave a Comment
Browse Our Archives
get the latest from
Science On Religion
Sign up for our newsletter
POPULAR AT PATHEOS Public Square
1

Public Square
Racism and the Professional Class
Science On Religion

Was Jesus white (and should art indicating He...
THE QUESTION: Was Jesus white? THE RELIGION GUY’S ANSWER: No. But in...
view all Public Square blogs
What Are Your Thoughts?leave a comment
Copyright 2008-2020, Patheos. All rights reserved.