Why Are There Atheists? 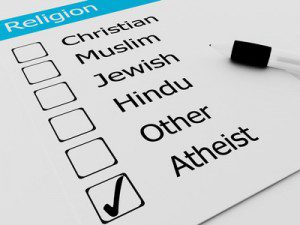 Why are there atheists? This isn’t just a rhetorical question – much scientific research into religious belief over the past couple of decades has concluded that religious belief is culturally universal, and arises from cognitive and cultural defaults that are persistent across societies. Many academics, especially in the humanities, might reject such universalizing claims, but the fact remains that religious beliefs and practices are found in all human societies, very nearly without exception. Clearly, there is something basically human about being religious. So does this mean that atheists are freaks? One psychologist says “Nope.” Instead, she gives evidence to show that atheism is a perfectly expectable outcome of basic – and natural – personality differences between individuals.

In an article for Religion, Brain & Behavior, Catherine Caldwell-Harris, an experimental psychologist at Boston University, summarized research spanning decades on the differences between atheists and religious believers. The agglomerated results describe a unique personality profile for atheists, suggesting that certain aspects of personality orientation may naturally lead some people to religious belief and others to nonbelief. Namely, compared with religious believers atheists tend to be less social, more individualistic, and less socially conforming. Atheists also show a tendency to prefer logical rather than intuitive reasoning, to enjoy solving puzzles, and, in Caldwell-Harris’s terms, to prioritize this-worldly ethical concerns over supernatural or transcendent concerns.

The surveys Caldwell-Harris examined ran the gamut: she drew on everything from large-scale demographic studies, to quantitative cognitive and personality measures, to qualitative interviews. Sorting through this mountain of data, a number of important patterns made themselves apparent.

First, atheists tended to have lower levels of social attachment than religious believers. This included both family and friendship attachments; for example, in one large survey atheists rated themselves as significantly less enthusiastic than believers about family gatherings, road trips, cooking dinner with others, and getting together with friends. They also reported fewer social obligations; religious believers were more likely to report that others, including family members, depended on them for help or assistance.

Not coincidentally, single, white males were significantly overrepresented in the ranks of atheists and nonbelievers. Several authors, Caldwell-Harris reported, suggested that this demographic trend may mean that atheism is, at least in part, an indicator of social independence. Single males are much less socially integrated than most other groups, in the senses both of depending on others and having others depend on them. And at least in America, white males have enough social power and leverage that tight relationship networks aren’t always necessary. Religion, many theorists have suggested, is the basic tool for maintaining tight social relationships. Could atheism simply be the expected product of lifestyles in which tight relationships are not needed?

Possibly, but that’s not the only story. Caldwell-Harris also found that atheists tended to be significantly more individualistic, open to new experience, stimulation-seeking, and skeptical of authority than believers. They also were rated in several studies as less conscientious, less extraverted, and less neurotic than believers. These unique traits probably have to do at least as much with basic personality orientation as with demographic status or privilege, suggesting that atheism isn’t fully explained by social independence or lack of need for reciprocal relationships. In fact, atheists seem to share many personality traits with political liberals and artists, including nonconformity, openness to new experience, and sensation-seeking. Atheists were also more likely to endorse hedonism and the achievement of power as important personal goals.

Of course, you could argue that white males and others with less need for tight relationship networks can simply afford to be more sensation-hungry, less conscientious, or more nonconformist – they don’t depend on others’ approval for their well-being. But other research has showed pretty clearly that many of these traits are heritable, which means that regardless of social class, gender, or skin color, there are going to be some people in any community who are more, say, conscientious about fulfilling social obligations, and others who are more interested in finding new experiences and seeing things in novel ways.

What’s more, atheists also tended to be significantly more drawn to analytic and logical reasoning, while religious believers tended more toward intuitive reasoning. In one study, for instance, both Buddhists and Christians reported having had many odd or supernatural experiences, such as sensing a presence even when no one was nearby. Atheists, meanwhile, reported very few such experiences. This might seem like obvious finding, but many models of human religious beliefs claim that everyone is prone to having such supernormal experiences; the famous skeptic Michael Shermer, for example, has essentially built his career on showing how people’s brains are predisposed to see patterns where there aren’t any, and to intuiting the presence of beings where none exist. Since human brains tend toward this kind of “meaning-seeking,” it takes a logical, analytical – and skeptical – thinking style to override these cognitive defaults, and to question the intuitions that tell us there is meaning in, say, a shooting star or a quote on the radio that seems directed personally at us.

In fact, in several studies it was this analytic intellectual orientation that was the single biggest predictor of atheistic beliefs. This finding refutes the long-held assumption that many atheists reject religion for emotional reasons – being angry at God, for instance. Instead, it seems that many atheists come to disbelief simply because they prefer analytic thinking styles, which in turn lead them to question their intuitions and their default cognitive responses.

Finally, atheists’ moral concerns were significantly more focused on the physical world than those of religious believers. These this-worldly concerns included the environment, social equality and justice, and the overcoming of racism and nationalism. (Not many atheists reported being concerned about ensuring that others achieved salvation, or that God was pleased with their actions.) Again, no surprise. But Caldwell-Harris cited Jonathan Haidt to suggest that part of the reason for atheists’ non-transcendent moral attitudes was that atheists tend to live in social milieus, such as big cities, where tight, personal networks just aren’t as necessary for life. In smaller social worlds, transcendent beliefs and moral concerns serve to “glue” people together, forging tight relationships that boost group members’ chances at survival.

Perhaps the most interesting subject Caldwell-Harris’s paper highlighted was the question of whether atheistic personality traits may be adaptive. Many researchers (Richard Dawkins and Daniel Dennett not included) argue that religious beliefs and traits are adaptive because they help group functioning. But what about atheistic traits? Here’s one researcher’s take on that question:

Religion does indeed provide moral exemplars, legislators, and healers; nevertheless it is other cultural adaptations (e.g., artistic interests, atheist orientations, contesting ideologies) that truly provide the entertainers, creators, rebels, and revolutionaries. Presumably, human societies need both. This may explain why, throughout history, some people are religious and others are not. Both may have been useful, for complementary reasons, in determining what the world is today. (Saroglou 2010)

In other words, while religious personality types may be useful for helping “glue” communities together and keeping society functioning, atheistic types are more likely to be the innovators and problem-solvers.

What’s more, Caldwell-Harris suggested that nonconformity and skepticism – both traits associated with atheism – may be especially advantageous “during rapid environmental change.” This makes intuitive sense: during times when local circumstances are more or less static, relying on tradition and authority can be a good bet. After all, what’s more important than making sure society stays cohesive? But when times are a-changin’ and new problems assert themselves, society can benefit from having nonconformists and anti-authoritarian types in its midst – because it’s their novel perspectives that may generate just the solutions the society needs.

So what does this research mean for atheists in today’s Western societies? Well, a lot. First, it suggests that atheism, or at least the personality traits that seem to underlie it, may be adaptive – even at the cultural level. Second, it suggests that atheism is a perfectly expectable, natural variation within the personality spectrum. Third, it suggests that atheists and the religious may have different strengths – and liabilities. Religious believers are more socially integrated than atheists, tend to report being more satisfied with their family and social lives, and are likely to be more interpersonally agreeable. At the same time, because religious folks tend to value conscientiousness – the regular fulfilling of social obligations – over new experiences and novelty, they may be less well-equipped than atheists to recognize and solve new problems.

Atheists, meanwhile, may struggle to form communities as cohesive and long-lasting as those of religious believers. (A good example is modern Israel, where socialist or secular kibbutzes have generally failed, while those inhabited by Orthodox Jews have largely thrived; the same relationship has been shown for 19th-century religious versus secular American communes.) At the same time, atheists’ characteristic suspicion of authority and skepticism of tradition may make them the natural choice for producing novel and creative solutions to problems, and for generating technological, artistic, or cultural innovations. In other words, there’s a pretty good chance that people at both ends of this pole need each other. It might not be a match made in heaven.* But atheists and believers both have something to offer – even to each other.

Taylor & Francis is offering open access to articles from Religion, Brain & Behavior until March 1st. If you want to read some of this original research for yourself instead of taking my word for it, sign up for access here.

October 7, 2013
Civil Religion: It's What America Needs
Next Post

October 18, 2013 A friendly reminder: Science isn't reality. Reality is reality.
Recent Comments
41 Comments | Leave a Comment
"The other related topic I’m curious about is the evolution of modality and how we ..."
Positivist Music and Dance in Human Evolution
"This is so interesting! I’ve often wondered about the role of music and dance in ..."
Positivist Music and Dance in Human Evolution
"Sorry, this comment got stuck in the spam filter for several days!Yes, things have gotten ..."
connorwood The Myth of the Egalitarian Noble ..."
"I previously responded to this comment, then decided my response was pedantic. So I deleted ..."
connorwood The Myth of the Egalitarian Noble ..."
Browse Our Archives
get the latest from
Science On Religion
Sign up for our newsletter
POPULAR AT PATHEOS Public Square
1

Famine in the Bible is more...
The Conversation
Related posts from Science On Religion