Trust issues? The answer might be rhythm October 25, 2013 Connor Wood 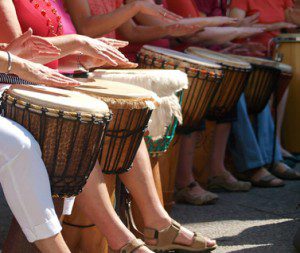 One mistaken assumption many Americans have about religion is that it’s a private affair – a certain set of beliefs that individuals either do or don’t hold in their hearts. But the reality is that throughout cultures and history, people have gathered to chant, sing, and worship in communities, from Korean Buddhist sanghas to little Protestant chapels in New England. While there are massive differences between traditions, members of nearly every religious community take part in some sort of synchrony, or shared, rhythmic action: think singing in time, or bowing simultaneously toward Mecca. And recent research from New Zealand shows that this moving or chanting in sync helps people act more generously  – especially if they’ve worked hard to stay in time with each other.

Previous research had already found that synchronous bodily motion encourages prosocial – that is, generous and cooperative – behavior. In 2009, for instance, a pair of psychologists from Stanford showed that marching in tandem around a building encouraged volunteers to be far more generous to each other than did simply walking together in a group. Similarly, a team at Northeastern and Harvard Universities found that synchronous tapping led participants to feel more empathy for and offer more assistance to each other.

But not all results have been positive. One team recently found that drumming in synchrony didn’t lead to any greater generosity among Brazilian volunteers, suggesting either that the effect is culture-bound (that is, limited to only specific cultures) or that it requires specific circumstances to elicit. (Some commentators, however, have also pointed out that the Brazilian study had a small subject pool, so the negative results might be due to low statistical power.)

In the face of intriguing but not unanimous evidence, the paper a team of New Zealand researchers published in PLOS ONE this past August sheds some useful light on things. Noting that many real-world religious rituals feature shared intentionality – a collaborative effort at accomplishing a ritual goal – Paul Reddish, Ronald Fischer, and Joseph Bulbulia designed three studies to parse out the difference between pure bodily synchrony and synchrony plus shared intentions. Their hypothesis? That shared intentions would boost the generosity-enhancing effects of synchrony.

It’s important to note that the “shared intentionality” in this study wasn’t focused on anything as grandiose as building a temple or even solving a math puzzle together. That is, the participants in the three studies weren’t teaming up to accomplish specific goals outside of the rhythmic, synchronous activities themselves. Instead, for example, some groups of participants were told to work together to stay in time, while other groups were told to work together to stay out of time. In both situations, the study participants had to keep focus on one another, attending to the entire performance of the group. To that extent, they were linked as a whole. But some groups were in synchrony while others weren’t.

Meanwhile, other participants were brought into synchrony as groups by focusing on metronome beats they heard through headphones. This design parsed out group intentionality from synchrony – because each individual was listening to the same metronome beat while swinging his or her arms or body, the group itself came into sync. But even though the group was in sync, the subjects weren’t paying attention to each other, or to the group: instead, each person was focused on the individual goal of matching his or her movements to the beat in the headphones.

For the first experiment, two other conditions were used: in one, the participants heard different beats in their headphones, which put their bodily movements out of sync with one another. And in the other, participants merely watched a video of other people playing a synchrony game.

Following these group activities, subjects were then asked to play a resource-sharing game. Each participant was given five dollars and then told to decide how much to contribute to a collective pot. The amount of money in the collective pot would be doubled after the game was completed, and the resulting sum distributed evenly among all players. This game is generally assumed to measure cooperation because putting your full five dollars in the pot is a risk: it only pays off if most of the other players also decide to invest their full holdings. If you’re selfish but others are generous, you stand to benefit: after the pot is doubled, you receive whatever portion is yours, plus the five dollars you decided not to contribute to the pot.

A second study used random chanted words and a different kind of resource-sharing game, the “stag hung” game. In the stag hunt, each player is given two options. In the first option, “option X,” players receive a guaranteed payout of seven dollars. In the second option, “option Y,” players get $10 – but only if all players choose option Y. If anyone else chooses option X, players who chose option Y get nothing at all.

In this study, the difference between chanting in rhythm and chanting out of rhythm was even more striking. Only 21% of participants in the non-synchronous chanting condition chose option Y – the more risky option that shows trust in other group members. But a full 62% of participants who’d chanted in time with one another chose risky option Y. Clearly, synchrony seemed to have an effect on participants’ willingness to trust one another (see chart above).

A final study was inspired by the fact that many rituals and dances around the world don’t feature pure synchrony, but instead require performers to act sequentially – that is, to perform in the same rhythm but out of phase with one another. (Think of ballet dancers in a line, each pirouetting right after the other: they don’t actually dance in perfect synchrony, but they do act in tandem and on the same rhythm.) Would sequential rhythmic acts have the same effects as synchronous ones?

When it came to group trust, the answer was pretty clear: no. Out of six conditions, the only condition to have a significant (and hefty!) positive effect on participants’ mutual trust was synchronous motion combined with group intentionality. When participants moved in asynchronous or merely sequential ways, they weren’t any more likely to choose the risky option Y. When participants moved in synchronous ways but only focused on their own bodies and a metronome beat, they couldn’t be bothered to trust one another. It was only when participants both moved in synchrony and focused on the goal of keeping in time with one another – not with an impersonal metronome – that their levels of trust skyrocketed. (More than 90% of subjects in the shared intention/synchrony group opted to trust their peers in the stag hunt game.)

This set of studies is a powerful addition to the research on group synchrony and cooperation, not least because it keenly distinguishes between a number of possible effects and influences. What’s more, within the constraints of its own design it falsifies a number of robust hypotheses. Does merely beating out a time together cause people to suddenly swell in generosity and trust? Not necessarily. Does moving in the same rhythm, but out of phase, have a big effect on prosociality? Apparently not. Instead, the authors show that the cooperation-boosting effects of synchronous motion – of the type found in mosques, temples, and rituals worldwide – depends on both shared goals and synced-up bodies. This is a great example of how religious practices and phenomena actually can be studied scientifically – and that we can really learn something from doing so.

November 5, 2013 Russell Brand is wrong about Western religions
Recent Comments
4 Comments | Leave a Comment
"Not just here, and not just now. The Chosen People included Nazi Germany, with a ..."
Epinephelus Itajara The Voice of Scientific Authority Is ..."
"I disagree. There are activists for causes I don't support- ones that I find heinous ..."
Epinephelus Itajara Geophysicist Dorian Abbot Loses MIT Lecture ..."
"Science offers no indication that we’re beloved children of God.The Bible is little better. God ..."
Bob Seidensticker Faith and the Evolutionary Predicament
"Very nice article. However, we need to stop calling these woke mobs activists. They are ..."
ginger_katz Geophysicist Dorian Abbot Loses MIT Lecture ..."
Browse Our Archives
get the latest updates from
Science On Religion
and the Patheos
Best of Patheos
Channel
POPULAR AT PATHEOS Public Square
1