The Brexit, the farmer, and the forager 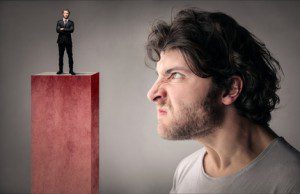 So: in a spasm of reactionary populism, Britain has voted to depart the European Union. This decision, shocking though it is, wasn’t an isolated incident. Far-right parties have recently gained ground in Poland and Hungary. Elsewhere in Europe, upcoming elections may catapult yet more right-wing populists to power, while American voters are succumbing to their own demagogic right-wingery in the form of Donald Trump. Why this sudden global outpouring of retrograde populism? The answer is that we’re embroiled in a pitched struggle between two sets of values: those of cavemen and those of civilization. But you’ll be surprised to learn who resembles whom.

You may have read the article that’s been floating around the internet for the past few months, claiming that there’s “one weird trait” that predicts support for Donald Trump. That “weird trait” is authoritarianism, a psychological construct that reflects support for strong leadership, obedience, and hierarchy. Matthew MacWilliams, a PhD candidate in psychology at the University of Massachusetts, Amherst, made an enormous splash when he published the results of his poll of 1,800 potential Republican voters, finding that authoritarianism predicted support for Trump more strongly than any other single demographic trait – from income level to race. People who like rules, obedience, hierarchy, and order are Trump’s rank and file.

Progressives, of course, took this finding as yet further evidence that Trump fans are moral troglodytes. The cosmopolitan moral code downplays obedience, loyalty, and hierarchy, instead valuing individual liberty, freedom, and equality. From this perspective, right-wing populism is not only distasteful and dangerous – it’s a massive step backward, to a time when patriarchy reigned and children were taught rote obedience instead of exploring their own potential. After all, self-described progressives believe in, well, progress. But here’s the irony: as futurist Robin Hanson points out, the ethos of personal liberty and anti-authoritarian social equality is actually pretty close to how our hunter-gatherer ancestors lived.

Researchers have consistently found that societies that depend on foraging (that is, hunting and gathering) tend to have strongly egalitarian values. The anthropologist Christopher Boehm has even shown that most forager societies actually punish people who try order others around. In foraging cultures, relationships and decisions are based on voluntary agreement, and individual initiative is rewarded. No one gets to tell anyone else what to do.

This individualism and egalitarianism works well for foraging. Foragers never know where their next meal will come from, so flexibility and individual initiative are crucial. But in a farming society, reliability, steadfastness, and respect for authority become a lot more important. Farming is repetitive: plant seeds, water and tend them, harvest and thresh the grain, fallow the field, ad infinitum. At most stages of the farming process, the payoff is still many months away. Farmers who plant in April don’t get to harvest until late summer or fall.

Hence, conscientiousness – the ability to fulfill obligations and delay personal gratification – becomes the keystone virtue for farming societies. It’s a profound contrast with foragers, who eat what they find, when they find it. Summarizing these connections, famed anthropologist Erika Bourguignon wrote that hunter-gatherers and foragers

live in terms of short-range risks and immediate successes. They…must have appropriate self-reliance, independence, initiative, and achievement motivation.…[By contrast, in agricultural societies] Adults must be reliable individuals, taught to accept responsibility and the care or nurturance of animals or plants; they must be obedient to their seniors and to social rules.

It’s no surprise, then, that farming cultures are near-universally more hierarchical than foraging societies. Foragers are proud individualists, but farmers are proud authoritarians.

Over the centuries, agricultural societies have become the norm, so farmer values – delayed gratification, respect for authority, a moral preference for stability and predictability – have spread and become widely institutionalized. Major religions have embedded these values deeply within their own ethical codes, so that “big god” religions like the Abrahamic faiths are, practically speaking, massive tools for inculcating farmer-like values. As the Industrial Revolution kicked off, many of the same virtues proved useful for factory life. Conscientiousness and respect for authority helped workers cope successfully with repetitive, physically challenging work within hierarchical organizations. So society continued to encourage and value the farmer ethos – especially for the working classes.

But by the early 21st century, a large subset of the Western population – mostly the slice that’s college-educated – has come to value a more individualistic, egalitarian mindset that’s unexpectedly reminiscent of…the hunter-gatherer ethos. I’m not the first one to suggest this. Back in 1999, the science writer David Berreby pointed out that “the information economy is undoing a culture of hierarchy, stability and reliability, and it is rewarding egalitarianism, adaptability and self-assertion.” Berreby claimed that modern tech companies and the globalized, information economy were inspiring people to pursue a lifestyle that was remarkably similar to that of our hunter-gatherer ancestors: less respectful of authority, more individualistic, more opportunistic.

Berreby’s observation is spot-on in light of today’s much-hyped “gig economy” and in the robust anti-authoritarianism that permeates Silicon Valley. Universities, too, go out of their way to inculcate the same individualist ethos, teaching students to be skeptical of authorities and to critically question received wisdom. Overall, our elite class has been taught to act and think like a band of foragers: proudly disdainful of orders and authority, eager for the next opportunity, unwilling to do things in a certain way simply because that’s the way they’re done.

It’s tough to blame them. In some ways, forager lifestyles might actually be a better fit with our innate cognitive and emotional architecture: spontaneity and egalitarianism allow for constant creativity and self-expression, whereas the farmer ethos requires self-suppression and obedience to external authorities. By all appearances, being a farmer isn’t as much fun as being a forager. If elites can get away with acting like neo-foragers in a varied, exciting, urban world, why not go for it?

The problem comes when you consider what keeps that world running. For hunter-gatherers in the ancestral African savannas, the surrounding environment was rich and self-sustaining. Humans lived off plants and animals in an ecosystem that was naturally fairly stable. But the urban cosmopolitans who live like neo-foragers today – and who are often the biggest supporters of globalization and economic integration – live in an environment that is entirely made possible by the conscientious labor of people who are still acting and thinking like farmers.

For every savvy college graduate working at a startup in a big city, working odd hours and pursuing her passion, there are a bunch of people somewhere else (usually in a less fashionable neighborhood) who turn up for work whether they feel passionate or not, rain or shine. Once they’re clocked in, they get about the business of making urban life possible: the electric company workers, the sewer crews, the delivery drivers. In general, this class thinks and acts like farmers, not like foragers. Why? Again, working-class jobs, like farming, require steadiness and consistency rather than initiative and individualism. And so, as you might expect, research has consistently shown that working-class people value obedience much more than upper-middle-class folks, and that these values are profoundly reflected in the different child-raising ethics of these two classes: working-class parents train their children to listen to and obey authorities, while educated parents teach kids to think for and assert themselves.

Keeping that difference in mind, let’s look at the four-item survey scale, developed by psychologist Stanley Feldman, that MacWilliams used to measure whether respondents were “authoritarians:”

Please tell me which one you think is more important for a child to have: independence or respect for elders?

Please tell me which one you think is more important for a child to have: obedience or self-reliance?

Please tell me which one you think is more important for a child to have: to be considerate or to be well-behaved?

Please tell me which one you think is more important for a child to have: curiosity or good manners?

Realistically, this survey might as well be called the “Do You Have Working-Class Values?” scale. So the real story isn’t that Trump supporters and Brexit voters are authoritarians. They’re “farmers” – the people who, traditionally, have done the low-innovation, high-consistency work that keeps civilization grinding on. As is only natural, they teach their kids to do the same.

But over the past 20 years, as a forager ethos has become more and more popular among the educated, these working-class folks have found themselves not only left behind economically, but also increasingly on the business end of harsh moral judgments directed explicitly against their farmer ethos. In a real way, the researchers and pundits who wring their hands about working-class authoritarianism are pathologizing exactly what makes working-class people, well, working-class.

So maybe we shouldn’t be so shocked that the populists of the West are revolting now. The internet is bursting with opinions about the modus operandi of populists: they’re racist bigots. They’re economically disenfranchised and bitter. They’re ill-informed. These theories all have a grain (or three) of truth. But the upsurge of Western populism is also a messy rebellion by people who are sick of being condescendingly tsk-tsked and morally censured for holding precisely the values that are necessary for keeping civilized life running. After all, as David Berreby wrote more than fifteen years ago:

She who hunts currency trades at 3 A.M. while eating a take-out salad is partaking of agriculture for the salad and industry for the plastic fork, the computer, the lamp, her desk and her clothes. Unlike real hunter-gatherers, the virtual ones depend on other people’s being enchained to the less enjoyable modes of production.

June 1, 2016
Science explains why America is going off the rails
Next Post