How to Do Interdisciplinary Work that Works 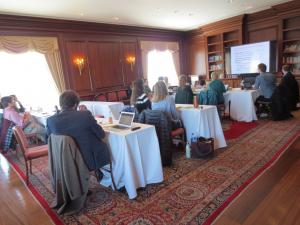 Last weekend, I hosted a colloquium on the scientific study of religion in Boston, along with Wesley Wildman and the Center for Mind and Culture. In attendance were some of today’s luminaries in the science of religion and culture, from experimental anthropologists to historians of religion (and one neuroscientist!). We gathered in a beautiful oak-paneled room overlooking the Boston skyline to discuss the state of the field, its challenges, and its future. It’s not every day that you get to take part in something like this.

Guests who dedicated their weekends to this colloquium were (in alphabetical order):

Everyone’s talks were fascinating and thought-provoking. We learned about the ways that ritual collectively bonds people together in South Indian villages, and about the effects of religious rules against cousin marriage on cooperation. The panelists discussed best methods for combining psychological studies with ethnographic fieldwork, debated the usefulness of philosophy in the human sciences, and offered suggestions for how to be truly scientific about studying culture – without losing the insights that the humanities offer.

The most memorable moments of the meeting, though, were the roundtable discussions that took place between each presentation. In these conversations, we found ourselves coming back time and again to the question of how to design studies that maximize both ecological validity and experimental control.

Ecological validity refers to the relevance and appropriateness of a study to real-world contexts. Let’s say that you want to study, say, the psychological traits of Hindu worshippers in India. You secure some funding, fly to India, and round up a group of research subjects from a temple. If you then ask all your subjects to fill out a survey that was designed by American Protestants to use with other American Protestants, you will end up with a whole bunch of cruddy data. Hindus generally don’t think about religion in the same way that Protestants do. Protestants usually care about faith and scripture above all else. Hindus often care more about religious practice, dharma or social rules, and devotion to particular deities.

Of course, even this is a ridiculous generalization. Hinduism is super-duper complex. Some Hindu worshippers focus mostly on household rituals, or puja – recognizing the gods of their family and village. Others are devoted to pan-regional deities. Still others are renunciants, living an ascetic life in pursuit of moksha, or liberation from the cycle of rebirth. There aren’t always good analogues for many of these Hindu practices in Protestantism. So if you try to generalize from Protestant ideas about faith in God to Hindu ideas about the importance of darshan, or being “seen” by the icon of a god during worship, you’re going to fail. The upshot is that you want a study design that’s ecologically valid – one that actually makes sense for the context you’re interested in.

But of course, the more ecologically valid your study is, the less experimental control it’s likely to offer. If you bring people into a lab and stick them inside an fMRI machine, you get a ton of precision and control. You can also keep the environmental conditions within very narrow parameters. You can control what types of data get collected and what the manipulations are. But you can’t do these things when you’re trying to take down interviews during a chaotic village festival. Real-world religious environments don’t offer much opportunity to carefully select which variables to manipulate.

So if you try to maximize ecological validity, you might end up with very fine-grained information that applies admirably to a particular social context, but isn’t very useful for drawing generalizations or testing broader theories about how people work across societies. Yet if you try to maximize experimental control, you’ll get potentially generalizable, rigorously controlled data that might not be applicable to any actual environment in the real world at all.

Of course, these problems aren’t unique to the evolutionary and cognitive study of religion, or even to the human sciences. Even in physics, where experimental control is exquisite and real-world applicability is so well-demonstrated by the technology we carry around in our pockets, the most powerful theories are highly abstract and idealized. Models center on nonexistent entities such as frictionless planes or pure vacuums. That is, we gain understanding of physical laws in general by ignoring the messy reality of physical things in particular. Peering behind the transient phenomena of the world like Plato, physicists intuit immutable, timeless laws.

So there’s always a tension between generalizability and contextual applicability. Yet several of the participants in last weekend’s  colloquium are blazing important trails in combining the best of both worlds. For example, Uffe Schjødt advocated for a style of neuroscience that takes each sample of subjects as a complete population in itself – not representative of a larger population, but as its own complete population. That way, when neuroscientists draw conclusions from their studies, they can be honest about the fact that their conclusions refer specifically to that particular sample. If and when they generalize from such findings, they might be properly humble about any claims.

Another way forward is illustrated by anthropologists who use quantitative methods and experiments while in the field. Joseph Henrich, Eleanor Power, Ben Purzycki, and Dimitris Xygalatas all fit this bill. Experts in the local cultures where they’ve done fieldwork, these anthropologists are adept at designing studies that fit the local cultural context while also saying something interesting about the wider human condition. For example, one recent empirical study on the relationship between religious beliefs and cooperation across eight different societies utilized this mix of ethnographic and experimental methods.

One way to approach these quandaries in the human sciences is to form interdisciplinary, collaborative teams. An ethnographer who’s an expert in a particular culture can help an experimentalist design a good study, without either of them having to be expert in each other’s fields. Good interdisciplinary collaboration, then, calls for a humble delegation of responsibility – an acknowledgment that no one can be expert in everything.

In turn, as several of the colloquium participants pointed out, the best way to get interdisciplinary teams to work well together is to bring them together around a focused research problem. It doesn’t work to just throw an anthropologist, a cognitive scientist, and a historian of religion into a room and say “Okay, do something amazing!” No, you need to identify a particular, yet-to-be-solved problem, and build your team around solving that problem, giving people a concrete reason to work together.

The problem I hoped to solve last weekend wasn’t quite like that – it was to get an overview of the current state of the scientific study of religion from a group of experts. Yet the presentations and conversations that resulted were informative and eye-opening in many ways. And in more good news, the vlogger and journalist Andrew Henry, proprietor of the popular Religion for Breakfast YouTube channel, was with us too, filming interviews with all of the participants during breaks. Look for those wide-ranging conversations to air in the coming months.

Acknowledgments: Boston University provided the meeting space for our colloquium, and funding for the meeting came from the John Templeton Foundation. 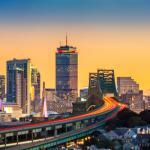 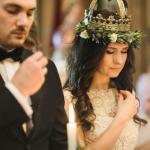 April 4, 2019 Catholic Marriage Rules May Explain Why Western Societies are So WEIRD
Recent Comments
0 | Leave a Comment
Browse Our Archives
Related posts from Science On Religion