How WEIRD are you? 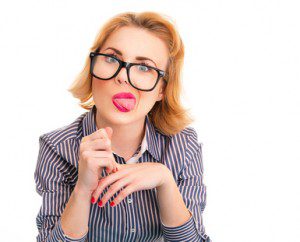 Imagine that you’re writing an essay about the most important facets of your personality. Do you discuss your personal likes and dislikes, your talents and your ambitions? Or do you talk about your family, your relationships, the community that envelopes you? If you prefer the former, individualistic response, you’re probably a citizen of a WEIRD country – Western, Educated, Industrialized, Rich, and Democratic. This means, of course, that you’re at a bit of a disadvantage when it comes to understanding how most people worldwide think about family, community, and morality. And new research from Virginia and China shows that you’re also likely to be socially – and, most likely, religiously – liberal.

In 2010, psychologists Joseph Henrich, Steven Heine, and Ara Norenzayan published an influential paper entitled “The Weirdest People in the World” in the journal Behavioral and Brain Sciences. A follow-up paper, “Most People are not WEIRD,” soon appeared in Nature. But what were these University of British Columbia researchers talking about? Who was so “weird” that a team of serious psychologists needed to write about them?

Simple: the psychologists were writing about themselves, and the college student populations they studied. Over a number of years, their research had found that, contrary to popular assumptions, the Western, educated, industrialized, rich, and democratic (WEIRD) populations that academic psychologists usually studied were in fact very different from most of the human race. Such populations tended to think more analytically, to be much more individualistic, and to feel a different sense of fairness than people from most other cultures around the world. They typically focused on the isolated parts of visual images, rather than looking at the entire whole. They remembered isolated components of shapes rather than the contexts they saw the shapes in. And they thought of themselves individuals entitled to free expression, even if that meant violating social norms or acting in ways that contravened traditional expectations.

These characteristics set Western, educated populations apart from other groups, suggesting that the WEIRD populations on which psychologists normally draw for their research pools – especially undergraduate college students – may actually be “outliers” when it comes to human nature…and therefore maybe not the best groups to draw on for making generalizations about human psychology.

But are all residents of Western nations equally WEIRD? Perhaps not. Recently, a group of researchers based at the University of Virginia and at two universities in China began to suspect that many aspects of WEIRDness might apply especially strongly to liberals, or social progressives. For one thing, social liberals in the United States tend to congregate in urban areas, which are also centers of individualism. What’s more, liberals also tend to live in more educated neighborhoods and to be more tolerant of nonconformist behaviors. Meanwhile, conservatives tend to live in more rural areas far from the centers of wealth and industrialization, and to be associated with groups and organizations that demand conformity, such as sports teams, church groups, and the military. In our WEIRD society, could liberals be the WEIRDest members?

The team, led by UVa psychologist Thomas Talhelm, tested this hypothesis by having five different groups of people complete special exercises designed to distinguish analytical from holistic thinkers. The first exercise asked participants to choose which two words out of a group of three should be paired together. For instance, the three words might be “monkey,” “panda,” and “banana.” Individualistic, analytical thinkers tend to choose the two words that fit the same abstract category – in this case, “monkey” and “panda.” Holistic thinkers, meanwhile, tend to choose the words that share a specific functional relationship; here, monkeys eat bananas, and so the words “monkey” and “banana” would be most closely related. 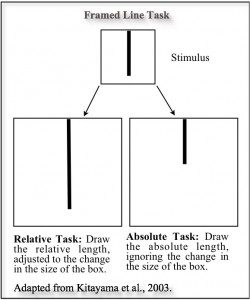 The second exercise showed participants a picture of a line in a box, followed by a larger, empty box. Participants were asked to draw a line in the empty box that was either the same exact length as the original line, or one that was adjusted to preserve the relative proportions of the line and the surrounding box (see illustration to the right). Analytic thinkers tend to be better at retaining the absolute size of the original line. Holistic thinkers, on the other hand, tend to excel at preserving the relative proportions of the line and box, since keeping track of the relative proportions requires paying attention to the relationship between the line and its surroundings. Talhelm and his colleagues hypothesized that liberals would do better at the analytical task, and conservatives at the holistic.

In their first study, several hundred university undergraduates – the prototypical WEIRD population – carried out both exercises. As the researchers expected, self-reported social conservatives tended to associate word pairs on the basis of functional relationships, and to perform better at the relative task in the framed line exercise. Self-reported liberals, on the other hand, tended to associate word pairs based on their abstract categories and to outperform conservatives on the absolute size task in the line exercise. These effects were all highly statistically significant, and they weren’t mediated by gender or demographics. Liberals, it seemed, actually thought more analytically, and less relationally or holistically, than conservatives. A second study drawing on thousands of online research participants, and using only the word-pairing exercise, resoundingly supported these results.

For their third study, Talhelm and his colleagues expanded their subject pool to include residents of China, a country thousands of miles away – both figuratively and literally – from the WEIRD cultures of North America. More than four hundred Chinese college students in geographically distinct areas of China, Beijing and Guangzhou, completed the word-pairing task, with words translated into Mandarin. The students also completed questionnaires that asked about social and political ideology. As expected, students who indicated they were more conservative also tended to pair words on the basis of their functional relationships, while more liberal Chinese students relied on abstract categories – exactly the same pattern as in the WEIRD world.

So the association between social progressivism and analytical, non-holistic thought seemed to be clear. But did the relationship go deeper than that? The final studies tested to see whether priming people to think analytically or holistically could actually cause liberal or conservative political attitudes. Subjects in the fourth study were UVA undergraduates who performed a reversed version of the word-pairing task, intentionally pairing groups of words based on either their functional relationships or their abstract, conceptual similarities. They then read conservative- and liberal-leaning articles on welfare and special education, and indicated which articles they agreed with. Subjects who had been primed to think analytically – by pairing words according to their abstract categories – were more likely to agree with the liberal welfare op-ed, and subjects who were asked to think holistically tended to agree with the conservative version. The fifth study replicated these findings with an online sample.

As Talhelm and his colleagues predicted, neither priming condition had any effect on how the subjects felt about special education students, since the opinions expressed in the different articles on education didn’t have any clear relationship to conservative or liberal positions.

Across these studies, interestingly, analytical and holistic thinking was strongly associated only with social ideology – economic conservatism or liberalism was mostly unrelated. What’s more, libertarians – who typically side with conservatives in elections – were more similar to liberals, strongly preferring analytical cognitive patterns. Talhelm and the other researchers argued that this was because libertarians and social liberals are very similar when it comes to one important dimension of social life: they tend toward individualism, and distrust the authority of tradition. Social conservatives, on the other hand, tend to value tradition and to see themselves primarily as members of groups.

This research has remarkably important implications for the study of religion, as well as for understanding today’s ideological struggles across the Western world. Many religions have wielded metaphors of beehives or organismic identity to describe themselves, suggesting that religious practice is, in many ways, a tool for creating strong webs of dependent, personal relationships. People who adhere to secular, libertarian, or progressive philosophies often look askance at such strong, religious social bonding, because it can create ingroup/outgroup distinctions that sometimes lead to discrimination, prejudice, or worse. The WEIRD preference for analytical thinking – studying individual items, stripped of context – fits perfectly with this individualist mindset. But it doesn’t mean that WEIRD thinking is necessarily better. Both analytical and holistic thinking are obviously necessary for everyday living; after all, we have both left and right brains, don’t we?

March 22, 2013
Psychology and the religion-science conflict: Part 2
Next Post

April 3, 2013 Forgiveness and health: It's complicated
Recent Comments
0 | Leave a Comment
"menangqq adalah situs permainan poker Online dengan server kualitas terbaik dan bonus ratusan juta rupiah"
berbonusqq When the Social Order Has Legitimacy ..."
"This post is spot on. The problem is accentuated by a disparagement of cultural traditions ..."
Positivist Is Academia a Failed Initiation Rite?
"Another example of WIERD being, well, the weird exception to the rule.The "missing second half" ..."
Kevin Kostlan Is Academia a Failed Initiation Rite?
"Good points, Elritus.I think often times folks are right to resent a system (or System) ..."
connorwood The Symbolism of Old Gods and ..."
Browse Our Archives
get the latest from
Science On Religion
Sign up for our newsletter
POPULAR AT PATHEOS Public Square
1