Do you believe in magic? Seriously.

Do you believe in magic? Seriously. January 18, 2013 Nicholas Didonato 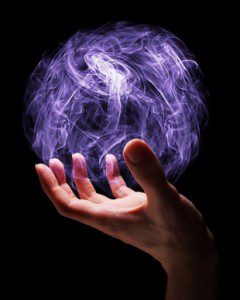 No self-respecting defender of science would admit to believing in magic. Science has surpassed magic by providing real explanations. Yet, when put in the right situation, even these defenders betray an affinity for magic. Psychologist Eugene Subbotsky (Lancaster University, United Kingdom) has compiled a series of studies to argue that belief in magic begins in the consciousness of children (who explicitly accept it) and then persists by living in the subconscious of adults (who explicitly deny it).

Subbotsky’s hypothesis (that children accept magic, but as adults they consciously reject it while subconsciously accepting it) finds empirical support from seven experiments. First, studies have suggested that children in industrialized cultures believe in magic. For instance, when psychologists asked Russian four-, five-, and six-year-olds if a picture of an object can be transmuted into that object by a particular magic spell, only the four-year-olds answered affirmatively. However, when the psychologists left the room, children of all ages chanted the spell and expressed disappointment when it did not work.

Second, children in industrialized cultures who engage in magical ideas have enhanced creativity. Psychologists found that five- and six-year-old American children who believe in the Tooth Fairy reported false memories and experiences about interacting with the Tooth Fairy. Their imaginations provided sometimes fanciful false moments with this magical creature.

Third, though school-aged children cease to indulge in magical explanations for observed phenomena, they can easily lapse back into them. In one experiment, Subbotsky asked five-, six-, and nine-year-olds to distinguish between a magic trick and real magic. Only 45% of the five-year-olds, 60% of six-year-olds, and 90% of nine-year-olds could do so. Subbotsky then showed the six- and nine-year-olds who said they did not believe in real magic a “demonstration” of it: he placed a postage stamp in a seemingly ordinary empty box, and then, without a clear cause, it incinerated. Upon seeing this display, 65% of five-year-olds and 45% of nine-year-olds reverted back to magical belief despite having just denied it moments prior.

Fourth, adults in industrialized countries will dogmatically deny magical events and refuse to entertain magical explanations. Subbotsky subjected British undergraduate and graduate students to the same stamp-burning trick mentioned above, and they refused to believe it was magic. He even allowed them to inspect the box, and, failing to find a rational explanation, they continued to disbelieve in magic. They appear to have dismissed magic a priori.

Furthermore, and fifthly, adults in industrialized countries will build defenses against magical explanations so that they do not succumb to them. Before the stamp-burning trick with the university students, Subbotsky gave the students a distracter task: before the experiment, he made the students leave the room and find a toy. When later they could not explain why the stamp burned, 75% falsely reconstructed the order of the events, claiming that Subbotsky had them leave the room after the stamp had been placed in the box (but before it went up in flames). In other words, the students developed a cognitive defense against magic by concocting a rationalization of the unexplained event.

Having established that children believe in magic (and that it may benefit them by enhancing their creativity), and that even older children readily lapse back into magical explanations, and also having established that adults refuse to accept magical explanations and will build defenses against them, Subbotsky brought forth evidence to support his claim that, during this transition from childhood to adulthood, magical beliefs move underground to the person’s subconscious. In a sixth experiment where he placed a plastic card in that same “magical” box that incinerated a postage stamp, and it caused substantial damage to the card, he asked his control group if they would mind subjecting their driver’s licenses to the magic box, and only 12% protested. However, in the experimental group he raised the stakes and asked them to place their hands in the box, which 50% refused to do, justifying their refusal by admitting that the magic could harm them.

In a related study, Subbotsky asked British undergraduate and graduates to respond to an imaginary scenario: a witch walks up to someone and offers to cast a spell that will affect their future well-being, either a good spell or a bad spell. In the control group, the witch makes this offer to an imaginary character whom the student advises, and in the experimental group the witch offers this to the students themselves. In the first case, 50% advised the character to decline both spells, but in the second case, only 40% refused any spell whatsoever and the other 60% took the good spell with none taking the bad spell. If neither good spell nor bad spell have any real efficacy, one would not expect such lopsidedness. When personally at risk, many openly admitted their fear of magic, and thus their belief in magic. From such studies, Subbotsky concluded that in the industrialized world, people’s belief in magic migrates to their subconscious by the time they enter adulthood.

Finally, similar experiments were conducted in an unindustrialized part of the world (specifically, rural Mexico), and the results only differed from those above in that the participants there freely admitted and discussed their belief in magic.

For more see, “The Ghost in the Machine: Why and How the Belief in Magic Survives in the Rational Mind” in the journal of Human Development.