The Joys and Challenges of Interdisciplinary Research 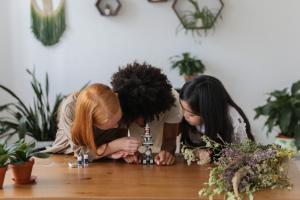 Academia can be a fiercely jealous environment — jealous, that is, of the boundaries between disciplines. Rather than “scientists,” you’ll find physicists and oceanographers, biologists and chemists, neuroscientists and psychologists, all tucked away in their own, sometimes feuding departments. But even these categories are too broad. There are social cognitive neuroscientists and neuroimaging methodologists, theoretical evolutionary biologists and cell biologists, cognitive psychologists and developmental psychologists. Each speciality within a given field has its own journals, its own conferences. Interdisciplinary contact is rare. Two scientists with the same PhDs might occupy adjacent offices and yet never encounter each other in professional life.

The situation isn’t much different in the humanities. Gather a random sampling of three PhDs in, say, English literature, and you might find one expert in 10th- and 11th-century Anglo-Saxon alliterative verse, one postcolonial studies guy with a focus on Sri Lanka, and the world’s foremost authority on gender in Victorian novels between 1840 and 1860. And let’s not even get started on comparative literature.

With this level of specialization and compartmentalization — or “siloing” — the big picture of any field can often be hard to keep in view. In fact, even asking whether there is a big picture can be an embarrassing faux pas. The ethos and the actual practice of academic life is so relentlessly analytical, so laser-focused on identifying differences and distinctions, that seeing connections between fields or subjects can be suspect, a sign of softness.

The Benefits of Bridging Disciplines

Yet it’s also true that many of the greatest research breakthroughs come when the insights or discoveries of one field illuminate the problems of another, or when researchers from only semi-related disciplines get together to swap ideas. For instance, Einstein developed his theories of special and general relativity by, in part, crossing Riemannian differential geometry with Maxwell’s research into electrodynamics. Darwin famously hit on the theory of evolution by natural selection by ingeniously combining Malthus’s grim political economics with Lyell’s deep-time, uniformitarian geology.

Much closer to earth, my own main (smallish) theoretical contribution to the human sciences is the proposal that psychological self-regulation is necessarily a function of the ritualized costly signaling behaviors that we use to stabilize our cooperative coalitions. I arrived at this idea by tying together some insights from anthropology, behavioral biology, social psychology, and cybernetics or control-system theory, following the trail laid by one of my mentors, Rich Sosis. I’m emphatically not comparing myself to Darwin or Einstein; I’m just illustrating how the spaces between disciplines can offer a lot of low-hanging fruit.

The potential usefulness of bridging disciplines isn’t a secret, despite the protectionist instincts of many academic departments. Inspired by the past successes of disciplinary cross-fertilization, many research teams across the sciences are now trying to emphasize interdisciplinary methods, bringing together people from different fields to collaboratively tackle focused problems. My first postdoc was one of these projects, bringing together computer engineers, philosophers, and social scientists to study the cognitive and social dynamics of religion. The journal Nature even published an entire issue promoting interdisciplinarity not long ago.

Inertia for a Reason

At the same time, most research continues to be done well within traditional disciplinary bounds. There are good reasons for this: researchers who are clearly situated within a single field know, for the most part, exactly who their audiences are, which helps them to target and publish their work in venues where they know it’ll be seen. Fluent in the unique jargon of their own field, they don’t have to worry about translating their primary work into the patois of some other discipline. They can leverage coherent institutional infrastructures, like specialist journals and conferences, to move up the academic ranks in a straightforward way.

Those who work on interdisciplinary research, by contrast, frequently have a harder time advancing their careers. They’re often  obliged to build up new scholarly infrastructures from scratch. Finding funding is difficult, because most research grants are specifically reserved for individual fields. Every publication is an grinding act of translation, as writers are obliged to bridge and reconcile two or more different sets of jargon. And when the publication finally comes out, it’s never quite clear who the intended audience is. As the researcher Felicity Callard wrote,

(A)s much as everyone seems to agree that it’s a good thing, interdisciplinary work is a rather difficult thing to do…The interdisciplinary researcher, having wandered away from the usual tightly-defined markers of what counts as high quality work, doesn’t always find it easy to place her articles in the best journals, to fund her work through the usual channels, to explain what she does to appointment and promotion committees, and so on.

All this might seem unfair or blockheaded, and sometimes it is. But disciplinary boundaries exist for a reason. Specialized fields develop to address unique problems from a distinctive, coherent point of view. This is how the basic work of scholarship and science gets done. Nuclear physicists have to be able to talk to and understand other nuclear physicists. Cognitive neuroscientists have to share enough background knowledge to be able to implicitly “get” what they’re each saying. This means spending time together — building up a common store of knowledge and understandings, reading the same papers and journals, attending the same conferences. For years and years.

Science As a High-Context Culture

For all its self-image as the preeminent means of overcoming cultural barriers, science, then, is in practice a high-context affair. You have to come to the lab meeting with a tremendous amount of shared, implicit knowledge in order to communicate well and get anything done. One reason academic departments discourage graduate students from blurring disciplinary boundaries is that they somewhat justifiably want to protect that shared knowledge base. They’re guarding the implicit agreement about what cell biology, or cognitive neuroscience, or whatever, is, what its methods and paradigms are. Without that agreement, research stops being collaborative and becomes the Wild West, except less glamorous.

In the midst of these tensions — disciplinary boundaries versus exciting cross-fertilization, vertical depth versus horizontal breadth — researchers who are genuinely interested in bringing different fields into productive contact face some thorny problems. Do you keep your head down, do things by the book, and wait til you’re safely tenured to do the research you’ve dreamt of? But what if you never get tenure? What if you burn out first, trying to do work that doesn’t really engage you?

One alternative is to find ways to do little interdisciplinary collaborations here and there, while keeping basically on the straight-and-narrow track that National Science Foundation grant officers prefer, trying to have a little of your cake while eating it too. Another option is to simply go for it from the beginning — find a graduate program that will support you to do wild, exploratory work. This was my strategy. My PhD thesis linked together complex systems theory with ritual studies and empirical social psychology. It was a rewarding project. But finding a job proved difficult, in part because of the “legibility” problem: is your work recognizable or interpretable to people who make hiring decisions? Will they know which criteria to use to evaluate its worth? Will they know what to do with it?

The more interdisciplinary your research is, the smaller the pool of people who will be qualified or comfortably willing to assess it. Readers and hiring committees might think that the parts they understand are interesting, even compelling. But if they lack the expertise to assess whether the other parts are state-of-the-art or completely bogus, they might conclude: why risk it? The extreme oversupply of labor in the academic job market, along with the increasingly volatile nature of academic politics, make hiring committees very risk-averse. They don’t want social media mobs descending on them and they don’t want eggs on their faces. They want the safe bet, and they usually have the luxury of choice.

So despite the increasingly widespread, mostly sincere, interest in interdisciplinary work over the past decade, it hasn’t gotten any easier to find ways to do that work. It might even have gotten more difficult, as the labor market has tightened and hiring committees have opted more for candidates who won’t rock the boat.

However, people do find a way. My former Boston University colleague Paul Cassell, now a lecturer at Arizona State University, also studies religion through the lens of complex systems. His work blends the humanities (religious studies, philosophy) with the sciences (complexity theory, evolutionary biology), showing that it’s possible to bridge distant disciplinary gaps without losing rigor — even if your route to career success might have a few more switchbacks and blind corners in it than somebody else’s.

This was all a very long windup to say that Paul (that’s Dr. Cassell to you, unsolicited bulk mailers!) will be giving a talk next month for a new initiative that several other colleagues and I are putting together for pursuing scholarship outside of the academy. The initiative, Scholarium, will eventually offer courses in religion, philosophy, the social sciences, human evolution and culture, Kabbalah, and much else besides. But for now we’re beginning with open public lectures via Zoom. We’re hoping to offer a venue where people can talk and learn about ideas in the open, focused on learning for its own sake.

Paul will give his lecture, “Between the Humanities and Sciences: Interdisciplinarity in Academia,” at 7:00 pm on Thursday, May 20. If you’re interested, RSVP here. Keep tuned to this space for future opportunities to take courses on the kinds of things I’ve blogged about here for years: culture, cognition, evolution, religion, and science. It’s time to bring the knowledge into the open.

March 31, 2021
The End of the Conflict Between Religion and Science
Next Post