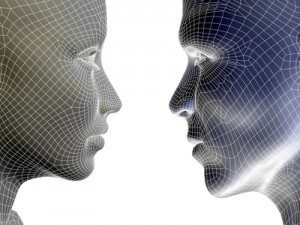 Religion is simple, right? Some people believe in gods and an afterlife and stuff, and others don’t. That’s all there is to it. Wrong – religion is super ridiculously complicated. There are thousands of different religions across the world, with a stupendously dizzying array of different beliefs, rituals, and stories. For example, many Hindus worship the supreme god Vishnu, who creates the world while sleeping on the cosmic ocean. But millions of fellow Hindus say that another god, Shiva, is actually the one who creates everything, by dancing the cosmic tandava dance.* Vaishnavites and Shaivites have different ways of praying, different holidays, and different mythologies. And that’s just within Hinduism! All the other religions are equally, absurdly different from each other. So how do we get a handle on this vast realm of difference and variation? Well, one of the best techniques for understanding really, really complicated things is through…computer simulations. Think I’m joking? The research project I’m about to start work on is a three-year effort to model theories of religion.

The project is called the Modeling Religion Project. Funded by the John Templeton Foundation, it’s a joint collaboration between the Institute for the Bio-Cultural Study of Religion (IBCSR) in Boston and the Virginia Modeling, Analysis, and Simulation Center (VMASC) at Old Dominion University.** This will be the first comprehensive effort to systematically model the predictions of many different cognitive and social theories of religion in ecologically valid simulated settings. In English, this means that we’ll  program models so that simulated religious believers and religious groups will behave the way that theorists predict they should, and we’ll put those believers and groups in different geographical, political, and historical settings to see what happens. Nothing like this has really been tried before. Hopefully, we’ll make real advances in our understanding of the social dynamics of religion – which, as I just mentioned, is more than a wee bit complicated.

One of the advantages of using models to study religion is that it will force us to put the big, important theories of religion side-by-side and work out their logic carefully – two things that haven’t been done very much in the past. The secular study of religion (known as religious studies) is rich with important theories about religion, but the different theories aren’t often subjected to direct comparison, despite making predictions that directly impinge on each other. It’s a wilderness, in other words – it seems like every new researcher comes up with a good theory that matches her own data, but then the new theory remains orphaned from established theories, dangling by itself in the dim cavern of isolated religious hypotheses. It’s tough to form a cohesive understanding of the whole this way.

What’s more, hypotheses about religion are devilishly difficult to test, because you can’t very well go into a real human society, force a control group to stay away from religion, and make an experimental group pray to Mecca five times a day. Real human societies can’t be manipulated like that. The upshot is that many useful theories of religion become influential without ever undergoing the serious testing that could identify weak spots – even though they’re drawn from rigorous field observations.

This might all seem a little abstract. Let me give an example. One influential theory, put forth by anthropologist Joseph Henrich, predicts that Credibility-Enhancing Displays (CREDs) make religious beliefs seem more plausible. If Bob says he believes something, and then he acts as if he actually believes that thing, other people will be more likely to accept his beliefs. This hypothesis predicts, for example, that children will be more likely to accept their parents’ religious traditions if their parents put their money where their mouth is. If Mom and Dad say that Jesus forgave people, and then they forgive each other after a fight, that will make the kids more likely to accept their church’s claims about Jesus and forgiveness. But if the grownups don’t forgive –  that is, if they don’t practice what they preach – then the kids might begin to think that all this religion stuff doesn’t really matter after all.

A similar, but crucially different, theory comes from the late anthropologist Roy Rappaport, who said that religions need vague, unfalsifiable claims, like Judaism’s Sh’ma (“Hear, O Israel, the Lord our God, the Lord is one”), at the very center of their belief systems. By partaking in rituals, believers implicitly promise to abide by the moral norms of the community – such as reciprocal cooperation and support. So when people receive help from their fellow believers, this increases the recipients’ confidence in the core claims themselves.

For example, let’s say that you go to temple each Friday. By worshiping alongside you, your fellow synagogue members are making tangible, implicit “promises” to mutually support you. Now let’s say that your grandmother dies, and your fellow congregants make good on those promises by showing up at your house and sitting shiva (not to be confused with the Hindu Shiva), bringing food and comfort. According to Rappaport, this experience will increase your confidence in the core claim of Judaism: the Sh’ma. But notice that the Sh’ma doesn’t actually contain determinate semantic content. It doesn’t make any falsifiable predictions. This is the genius of religion, Rappaport argued – its core claims are semantically vague, but our commitments to them are grounded by the concrete ways that we fulfill our obligations to each other within the group.

So here we’ve got two different, but related, theories about how religious claims come to seem plausible. Henrich’s CRED hypothesis predicts that, when believers do costly, difficult things because of their beliefs, other folks will take those specific, clearly articulated beliefs seriously. It’s basically about whether people actually believe the things they say they believe. By contrast, Rappaport says that religious rituals refer to logically unfalsifiable concepts that serve as intangible placeholders for our tangible moral obligations to each other. When we actually fulfill those mundane obligations, the vague but extraordinary and overarching claims of religion come to seem verified and supported. Both hypotheses predict that the cognitive aspects of religious commitments depend on behavior – on people putting their money where their mouth is. But they’re describing different processes. One has to do with specific, actionable beliefs, the other with vague but foundational ones. Nevertheless, these two distinct social and cognitive aspects of religion clearly bear on each other. So what if we put them both in our models and see how they influence one another? Well, that’s exactly what we’re going to do in the Modeling Religion Project.

Crucially, plugging these sorts of theories into our models will mean having to tease out the hidden logical implications that lurk inside each theory. Many theories about religion – this most absurdly complex of human phenomena – contain massive bundles of unarticulated predictions and logical consequences. Modeling them in a computer simulation will force us to make all this implicit content explicit – it’ll force us to work out exactly what each one of these theories says, concretely, and what its precise implications should be. If you’ve ever drawn out a flow chart for a complicated idea you’re trying to write down, you know how being explicit about your theory suddenly brings the whole thing into a new clarity, exposes logical inconsistencies, and gives you a chance to see whether it all hangs together. We’ll be doing exactly that for the most important cognitive, anthropological, social, and critical theories about religion of the past 150 years. This will be, frankly, awesome.†

But it doesn’t mean that we’re going to explain everything about religion. Anyone who plans to explain all of religion needs to find a different line of work where it is okay to flout reality, such as fiction writing or accounting. And we won’t explain why stories about Vishnu or Abraham grab us emotionally the way they do, or whether there’s a God (or gods). In fact, one of the project’s goals is to show that quantitative modeling can produce real information about the social and cognitive aspects of religion, without treading on the territory of the humanities – which is the disciplinary backbone of religious studies.

After all, the humanities, with their emphasis on texts, history, and interpretation, provide a lot of the raw data that more scientifically minded folks work with. This means that, in a real way, the humanities come first. This is important, because – if you haven’t heard – the humanities have been going through a bit of a rough time recently. So the last thing many religious studies scholars want to hear is that some well-funded research group is using reductive, trendy computer simulations to pick apart their subject. In fact, many humanities scholars are downright defensive about how the sciences have spread, tentacle-like, to take over more and more scholarly territory lately – and they should be. The Japanese government’s recent (and extremely ill-advised) decision to cut humanities programs in favor of more “practical,” scientific subjects is a great example of how scientistic enthusiasm is hurting the more interpretive, literary, and historical fields in academia.

We don’t want to be part of that kind of anti-humanism. I mean, I have an English degree and a real love for the texts and material cultures of religion.†† I would be devastated if quantitative, data-based analysis killed off the old-fashioned style of studying religion: diving headfirst into texts and learning about the cultures they came from. But the Modeling Religion Project is built on the conviction that it will help everyone – humanists and scientists alike – to put the general theories of religion into simulations, test them against each other, and see whether they’re onto something. It’ll be a great step forward for religious studies – without laying waste to the valuable ground that’s been discovered by scholars before us.

Next time I write about the Modeling Religion Project, I’ll talk about another of its most exciting aspects: the non-expert simulation platform we’ll be developing, which will enable anybody who studies religion to create and run simulations – without having to know a lick of programming. Neat, huh?

* Which, of course, is also dance of destruction. Hinduism is complicated, which is why I love it and so should you.

† It’s good to be frank about these things.

October 13, 2015 Hilbert problems in the study of religion
Recent Comments
0 | Leave a Comment
Browse Our Archives
Related posts from Science On Religion