Does suffering drive us to religion? Yep.

Does suffering drive us to religion? Yep. February 8, 2013 Connor Wood 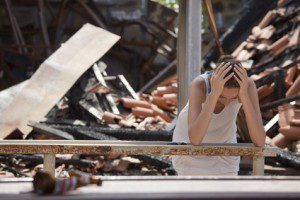 It’s a puzzling riddle: If God is in charge of everything, then why do people who undergo profound suffering often profess the greatest faith? Shouldn’t they retaliate at God by not believing in him?  The commonsense answer might be “yes,” but the facts seem to say otherwise. New research shows that New Zealanders who suffered from the devastating 2011 Christchurch earthquake actually became more religious afterwards than their fellow countrymen. What’s more, those who lost their faith after the quake suffered significant reductions in their self-reported well-being.

Many thinkers have made the case that the incredible, apparently random suffering that the natural world savagely deals out is sufficient reason to reject the possibility of an all-loving creator. Charles Darwin, for instance, was famously horrified at the parasitic ichneumonidea wasps that lay their eggs inside the bodies of paralyzed caterpillars, allowing the hatched larvae to devour their hosts alive from the inside out. The existence of such a grim arrangement in nature, he wrote, made him seriously question God’s goodness – indeed, God’s very existence.

But, demographically speaking, personal suffering doesn’t actually seem to cause disbelief, at least in our day and age. In fact, the poorest and most deprived regions of the world tend to be highly religious (for instance, subsaharan Africa and India), while the richest areas are increasingly secular (for instance, Sweden, France, and the northeastern United States). This phenomenon – that people who suffer are more religious than those who don’t – has spawned a so-called “religious comfort model” in the social sciences that claims that religious faith gives people the psychological resources they need to cope with adversity. Those who don’t have many problems just don’t have much need for religion – hence the relative godlessness of most wealthy countries.

An opportunity to test this theory arose in February 2011, when a major earthquake struck the city of Christchurch, New Zealand. Nearly 200 people lost their lives, and more than one-third of all the buildings in the city were severely damaged or destroyed. Importantly, two years previously, the first round of the sweeping New Zealand Attitudes and Values Survey (NZVAS) had collected responses from more than 6,000 people across the country, delving into their occupations, life satisfaction – and religion. The second phase of the survey was due to be collected in 2011, just months after the earthquake changed the lives of so many New Zealanders forever.

For researchers Chris Sibley (University of Aukland) and Joseph Bulbulia (University of New Zealand, Wellington), this meant that the Christchurch earthquake, terrible as it was, offered an unprecedented chance to see how people’s religious beliefs changed in the face of disaster and hardship. By comparing people’s religiosity and place of residence in both 2009 and 2011, Sibley and Bulbulia would be able to tell whether people affected by the earthquake lost their faith, became more religious, or stayed just as faithful – or doubting – as they had been beforehand.

Several months after the earthquake, when more than 3,900 responses to the 2011 survey had been collected, Sibley and Bulbulia sorted the respondents into four religious categories: believer, convert, disbeliever, and apostate. Believers were those who reported a religious affiliation in both 2009 and 2011, while converts were those who were irreligious in 2009 but shifted to become religious by the 2011 survey. Disbelievers, as you might expect, were not affiliated with any religion in either version of the survey, while apostates were those who were religious in the first survey but had lost their faith by 2011.

Sibley and Bulbulia predicted that, in highly secular New Zealand, those who had lived in the Christchurch area or had been personally affected by the earthquake would be much more likely to convert to a religion or maintain their religious faith than their unaffected countrymen. The researchers also hypothesized that Christchurch residents who reported religious belief would exhibit higher satisfaction with their health than earthquake-affected New Zealanders who had no faith. Finally, they hypothesized that Christchurch residents who turned away from religion between 2009 and 2011 (that is, apostates) would experience health declines compared to their fellow earthquake victims who were either believers, converts, or disbelievers.

But what about the positive effects of religion? Did Christchurch believers gain any tangible benefits from their faith? Keeping in mind that Sibley’s and Bulbulia’s measure for well-being was self-reported physical health – rather than, for instance, life satisfaction or mental health – the answer was a decidedly ho-hum “no.” Believers and converts who were affected by the earthquake reported no higher levels of health than their disbelieving counterparts.

However, believers, disbelievers, and converts all expressed significantly better health than the fourth group: apostates. Those New Zealanders who had both been affected by the earthquake and lost their religious faith between 2009 and 2011 reported being much less healthy than other earthquake-affected peers. Interestingly, this health gap was not present among New Zealanders who had not been impacted by the quake – everywhere else in the country, apostates fared just as well as others.

What do these results mean? Well, most importantly, they corroborate the hypothesis that people who go through difficult experiences are actually more likely to become religious – presumably as a source of comfort. This finding contradicts the opposite expectation that serious adversity suggests that no God or benevolent force is guiding things, and people who suffer ought to abandon religion. However, religious belief didn’t seem to lead to any concrete benefits, at least as measured by self-reported health. Instead, those who abandoned religious belief in the face of the Christchurch disaster seemed to suffer accompanying drops in their self-reported health.

Of course, this may be because people who lost their faith were simply more simply more seriously impacted – and possibly even injured – by the earthquake than others. In this case, the results may simply reflect the likelihood that people who are most crushed by life’s tribulations often give up on faith in despair, while those who are only moderately injured or challenged may still find religious faith a reasonable – and believable – source of comfort. This explanation is supported elsewhere; for instance, research suggests that in the wake of the September 11, 2001, terrorist attacks, the victims who experienced the most severe losses were the most likely to subsequently give up religious faith.

However, if it were universally the case that the most oppressive circumstances actually reduced religious belief, then religiousness could be expected to show a bell-curve distribution across nations. That is, the highest levels of belief should be found in countries where life is hard, but not too hard. But instead, religiosity appears to track adversity more or less linearly, with the poorest nations exhibiting the most religious belief. So, somehow or other, extreme adversity, disaster, or death seems to inspire religious responses in people, although exactly how and why is yet to be determined. Like Job, we may have to wait a long while for answers to the question of suffering.

For the original article, see “Faith after an Earthquake: A Longitudinal Study of Religion and Perceived Health before and after the 2011 Christchurch New Zealand Earthquake,” in PLOS ONE.

February 5, 2013
Religion the opiate of the poor?
Next Post

February 12, 2013 Religious households more likely to save money, plan for the future
Recent Comments
0 | Leave a Comment
"menangqq adalah situs permainan poker Online dengan server kualitas terbaik dan bonus ratusan juta rupiah"
berbonusqq When the Social Order Has Legitimacy ..."
"This post is spot on. The problem is accentuated by a disparagement of cultural traditions ..."
Positivist Is Academia a Failed Initiation Rite?
"Another example of WIERD being, well, the weird exception to the rule.The "missing second half" ..."
Kevin Kostlan Is Academia a Failed Initiation Rite?
"Good points, Elritus.I think often times folks are right to resent a system (or System) ..."
connorwood The Symbolism of Old Gods and ..."
Browse Our Archives
get the latest from
Science On Religion
Sign up for our newsletter
POPULAR AT PATHEOS Public Square
1

Purim At The Farmer’s Market: How...
Religion Now
Related posts from Science On Religion

Is Academia a Failed Initiation Rite?
Now that I’m (mostly) outside the world of American higher education, I’ve...
view all Public Square blogs
What Are Your Thoughts?leave a comment
Copyright 2008-2020, Patheos. All rights reserved.