An historian’s call to understand and engage creationists 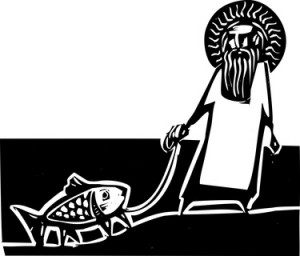 On February 4th this year, Bill Nye, the science guy, debated Ken Ham, the president of the Creation Museum in Kentucky. After the debate there was an abundance of commentary – some of it good, but most of it a mere repetition of old useless arguments that creationism isn’t science (in my opinion true, but an uninteresting observation). What seems to be missing from the various commentaries is a genuine attempt to understand how creationism arose and what creationists believe. Thus, while the Ham v. Nye debate is the occasion for this essay, it’s not its subject.

Imagine a world where the scientific, moral, and religious are united. This was the world in which Johnathan Edwards (1703-1758), often considered to be early America’s greatest theologian, lived. In some ways this is also the world of creationists. This, unfortunately, is not a widespread understanding and has implications for how those who accept the basic evolutionary story should address creationism and creationists. (Hint: scientific arguments alone will not work.)

In the 18th century the divine was thought to be intuited and experienced, and there was little need to argue for the existence of God.  In fact, rational argumentation was often seen as a lesser way to know about God. But in the 19th century, something changed. America became more concerned with arguments for God’s existence, especially the argument from design (that the biological world is evidence of a designer), as articulated by Joseph Butler (1692-1752) and expanded by William Paley (1743-1805). In short, the Enlightenment value of rationality became increasingly attractive for defenders of Christianity.

Darwin consciously argued against the design argument in On the Origin of Species. This book would be the occasion for much religious commentary. This commentary often indicates a concern that evolution would break up the unified conception of the created order. For instance, in 1874 Charles Hodge argued explicitly against natural selection precisely because natural selection was implicitly opposed to “supernatural selection.” Thus, the popularity of the design argument provided the opportunity for evolution to create a wedge between the natural and the supernatural in the late 19th and early 20th centuries. If religion offered a seamless unitary relationship between humanity and the universe early in the history of the United States, the rational religion of the 19th century allowed evolution (among other modernist trends) to pull at its seams.

Evolution helped to split Christians into modernists (those who accepted evolution and historical-literary approaches to the Bible) and fundamentalists. Fundamentalism, which gets its name from a series of articles published from 1910-1915 called The Fundamentals, was not at its outset unilaterally against evolution (though there were certainly fundamentalist critics of evolution). An example of a cautious defender of evolution among these founding fundamentalists is James Orr. Orr argued for a position he called theistic evolution in an essay called “Science and Christian Faith” that appeared in the 4th volume of the Fundamentals. However, the precedent for stricter interpretations of scripture was set. The new tendency to read Genesis more literally would be the backdrop for George McCready Price’s New Geology, published in 1923 – the first major articulation of young earth creationism post-Darwin.

At about the same time, science was becoming a profession. The term “scientist” was not coined until 1833 and was not in widespread use until the late 19th century. Instead, those who studied the natural world were studying “natural history” or were “natural philosophers.” Part of the outcome of the professionalization of science was the splitting of natural history and natural philosophy into distinct fields of study (such as biology, physics, and chemistry). 18th and early 19th century naturalists would often not be able to make enough to support themselves; thus, hobbyists dominated the ranks of naturalists. One common profession among these hobbyists was clergy, both in Europe and America. (For instance, Darwin considered becoming clergy early in his life, and the father of modern genetics, Gregor Mendel, was an Augustinian friar.)

During most of the 19th century “science” typically meant systematic knowledge, and this included theology. As late as 1869, Antoinette Brown Blackwell, the first woman ordained in America, included the philosophical traditions of metaphysics (inquiry into the fundamental nature of reality) and epistemology (study of how we know what we know) in her Studies in General Science. Even a discussion of ethics would not have been out of place in this book. The professionalization and specialization of science was mostly completed by the beginning of the 20th century. As a result, science was no longer united, but separated into distinct fields. This lack of unity in science, an intellectual endeavor gaining increasing respect, could not have helped those who wanted to maintain a unified understanding of the world.

Religious unity of the natural and the supernatural included humanity’s moral place in the universe. This concern about the origins of morality become more specific in contemporary anti-evolutionism. For instance, Phillip Johnson, the father of contemporary intelligent design theory, uses moral language rooted in a unified worldview when he argues that if we begin with Darwin then we are free to deny that we are created with a specific gender identity that exactly matches our biological sex. Ken Ham, in response to Norman Geisler, a conservative theologian who argues that Genesis 1 can be read non-literally, retorts that “the literal history [of the Bible] is critical to what it teaches us about God, man, sin, marriage, etc.” This emphasis on morality only makes sense if Ham’s morality is an integral part of a worldview in which moral and physical truths are one.

Science is part of this unity for creationists as well. But it’s not a science that contemporary scientists would recognize. In the creationist conception, observational science is strictly empirical; however, historical science requires extra-empirical assumptions – only what can be manipulated and observed currently in the lab counts as observational science. Observational science is shared by creationists and evolutionists alike. However, in the young earth creationist view as proposed by Ham, much of conventional science – geology, evolutionary biology, and any science that attempts to understand the past – is based on assumptions that cannot be empirically verified. Thus, these disciplines don’t count as science in the same way. For creationists, this conception of science helps to reconcile the apparent contradictions between the created order and a literalist interpretation of scripture (though Ham argues that science by itself is sufficient evidence for young earth creationism). Either you make up the required assumptions as needed or the assumptions come from the inerrant word of God. Thus, there is a strict unity between the Bible and natural creation.

This particular religious version of the unity of reality is what creationists are trying to convince people to accept. This is why, from a creationist perspective, it makes sense to bring morality into a scientific debate. This unified conception of reality is also the reason Ken Ham argues that the laws of nature presuppose a law giver.

What does this mean for those of us who accept evolutionary theory and think that it’s important that others do as well? It means that debates between scientists and creationists are mostly pointless. However, I don’t agree with those who think that if we leave creationists alone, they will go away. Creationism has not decreased over the last two decades in America. For those of us who think that evolution is currently the best explanation of the origin of species, understanding and engaging with the moral and religious aspects of the creationist worldview is paramount. Under conventional contemporary conceptions of science, any unification of the moral and the scientific worlds is not scientifically acceptable. Instead, such a unification is philosophical and theological. Thus, we can no longer pretend that the disagreement about the origin of species is only a scientific debate, because to creationists it is much, much more.

When Ham argues that conventional science requires a God because nature is understandable, he is calling attention to his own bias that the religious and the natural are unified. For those like me who accept the tenets of evolutionary theory, it’s vital to realize that if we ignore the larger unified worldview of the creationists, we miss many of their (sometimes valid) concerns. These are theological, philosophical, and historical concerns; thus, theologians, philosophers, and historians should enter these debates and address them.

February 19, 2014
Sinai and Synapses: A video about studying religion
Next Post

March 6, 2014 Being powerful makes you think analytically
Recent Comments
1 Comment | Leave a Comment
Browse Our Archives
get the latest from
Science On Religion
Sign up for our newsletter
POPULAR AT PATHEOS Public Square
1