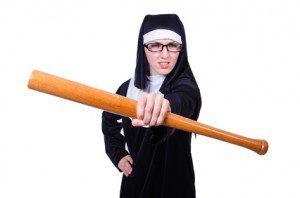 If you thumb through the annals of history, it isn’t hard to stumble across examples of bloody conflicts fueled by religion: the Protestant-Catholic “Troubles” in Northern Ireland; the violent Buddhist/Hindu Sri Lankan Civil War; the 30 Years’ War between Continental Protestants and Catholics. Of course, some writers have recently challenged the association between religion and conflict, but the assumption that religion encourages intergroup warfare is a hard one for most of us to shake. Recent research from Arizona State University isn’t going to help us shake it, either – in an article published this year in Psychological Science, a team of researchers found that cultures with high levels of everyday religiosity are more violent and prejudiced against outgroups.

The research team, led by psychologist Steven L. Neuberg, worked with a unique theoretical framework: unlike many of their colleagues in psychology departments, they assumed that religion consists of more than mere beliefs. Instead, the researchers acknowledged that religion includes “community practices, socialization functions, organizational structures, and a range of other features.” Working from this relatively sophisticated understanding of the nature of religion, Neuberg and his colleagues decided to study the relationship between conflict and what they called religious infusion: the permeation of everyday life with religious references, actions, and behaviors.

Need an example? A culture like modern, urban North America is not a very “religiously infused” society. Despite the inconspicuous crucifix necklace here or “Bless you!” sneeze response there, religious attitudes and beliefs are mostly private affairs in big North American cities. A village in rural Mexico, however, might be much more religiously infused, with public life and even casual spoken language positively shot through with references to God, Jesus, Mother Mary, the saints, and heaven.

In order to correct for previous research that had sometimes produced contradictory findings about religion’s influence on cultural violence, Neuberg and his colleagues decided to measure religious infusion by asking experts on 100 different geographic locations to reply to a questionnaire. 25 locations were chosen a priori because they’d recently been the site of a violent conflict between at least two groups. The other 75 locations were all randomly selected state members of the United Nations. Each location hosted two co-existing cultures or groups, which differed from each other on the basis of religion, ethnicity, or political divisions.

Experts were recruited from fields as diverse as anthropology, sociology, and history to provide information about the levels of religious infusion and various forms of conflict in both groups in every geographic locale. Each expert provided information on only one of the 100 locations, and none was told about the purpose or theoretical background of the study. On a nine-point scale, the hired experts responded to such questions as “To what extent do [members of the group] use religious values, narratives, and reasoning in public discourse?” and “To what extent do [members of one group] perpetrate violent acts of physical aggression against [members of the other group]?”

The researchers also investigated the relationship between power differentials, religion, and violence. Many of the geographic locations and countries had significant discrepancies in power, with one of the two cultures dominating or having majority status over the other. An example might be the relationship between Sunnis and Shia in Iraq, which is an unequal one politically and numerically.

Finally, the hired experts were asked about the extent to which the cultural values of the two groups in each location were incompatible with each other. Not all groups have utterly incommensurable value systems; Mormons living next door to Southern Baptists probably wouldn’t have as much to argue about as polytheistic Hindus setting up shop next to fiercely monotheistic Muslims. By indicating how incompatible the values of the two groups were, the experts provided valuable insight into the cultural tensions in each location.

With three sites dropped from analysis because of lack of responses, the research team crunched the final numbers for 97 countries and geographic locations throughout five continents. Several unambiguous relationships popped up out of the statistical analyses. First and foremost, high levels of religious infusion significantly predicted outgroup prejudice, interpersonal discrimination, and collective (that is, group-level) violence. The more pervasive religious practice was in a group, the more prejudicial and discriminatory that group was likely to be against outsiders.

Second and perhaps more interestingly, value incompatibility predicted higher levels of discrimination and prejudice – but only when religious infusion was prominent. In other words, two cultures with radically opposed value systems only acted in prejudicial and bigoted ways toward one another when they also used lots of religious language and behaviors in everyday life. Cultures boasting mutually incompatible value systems but low levels of public religiousness tended to behave more civilly toward (or perhaps just ignored) one another.

Finally, religion interacted with inequality and oppression in strangely opposite ways. When subordinate groups were highly religiously infused, they were more supportive of violence and aggression against the powerful group or culture. But low-religion groups in subordinate positions very rarely perpetrated acts of violence against their superiors. Surprisingly, this relationship was reversed for dominant groups: socially powerful but less religious groups acted more violently toward their inferiors, while religiously infused powerful groups were less likely to aggress against minorities.

These results contain a little something to irk everybody. Clearly, religious infusion makes groups more prejudiced against each other. If you take two groups with different histories, cultures, and habits, and then increase the role that religion plays in their everyday lives, they’re likely going to start seeing each other more and more as enemies – or at least as inferior outsiders. This unpleasant fact throws a wrench in any argument that religious faith is a springboard of moral goodness and universal brotherhood. It also offers welcome fodder to opponents of religion who  argue that faith fosters divisions between people and groups.

But the Marxists – probably the intellectual world’s most venerable collective opponents of religion – won’t like this study either. This is because its results seem to directly contradict Karl Marx’s fundamental assertion that religion is an “opiate,” or a palliative distraction that calms the oppressed masses and reconciles them to their subordinate position. To the contrary: this study showed exactly the opposite. Highly religious minority groups were much more likely to resist oppression through violent or aggressive means than their less-religious, but equally oppressed, brethren.*

These results could be interpreted in all kinds of ways, but I’ll restrict myself to a few observations. First, it’s great that psychology researchers are taking the behavioral, ritual, communal features of religion more seriously. For a long time (approximately forever), psychology in the industrialized West has assumed that “religion” is synonymous with “beliefs about (nonexistent) Gods or spirits.” The fact that Neuberg and his colleagues intentionally addressed the everyday, behavioral aspects of religious faith is a major methodological step forward.

Second, this study supports the “group-glue” description of religion, in which religious practices, beliefs, and habits help tighten up cultures as webs of individuals and bolster group identity. In fact, its findings make a good argument for the claim that religion is culture, or a basic ingredient of it. This interpretation contrasts with pure byproduct theories of religious belief, which argue that religion is just an accidental byproduct of our brains’ cognitive hardware. Clearly, religion does increase ingroup identification, which probably is adaptive in many contexts. This at offers at least circumstantial (and non-conclusive) support for the claim that religious phenomena are group-level adaptations. But in many if not most cases, the unwelcome result of heightened ingroup cohesion is a toughened group membrane that “protects” against infiltration from members of other groups or religions, turning outgroup members into potentially subhuman outsiders.

Finally, religion and irreligion affect group-on-group violence in many different ways. Religion really does increase prejudice against outsiders in a pervasively religious culture. However, going back to the mid-20th century, other researchers have found that some forms of religious belief seem to protect against outgroup prejudice. Neuberg’s study suggests that these findings could have been because those researchers were studying inhabitants of relatively secular cultures whose religious habits didn’t pervade everyday life – raising the question of whether there’s a “sweet spot” of religious infusion that provides the useful group-cohering functions without turning the group into a hive of bigots. (Or does ingroup coherence automatically produce outgroup prejudice, no matter how it’s achieved?)

Meanwhile, remember that non-religiously infused majority groups were more likely to aggress against minority groups than their religiously infused counterparts. So in some settings, non-religion predicts violence while religion protects against it. Things are complex. Especially when it comes to religion. Nevertheless, on balance religious infusion seems to boost prejudice and encourage discrimination, for reasons that have yet to be fully explored. We’re obviously dealing with a very complicated story here, playing out on an obscured stage. But studies like Neuberg’s give us us a candle in the dark.

* The philosopher of science Karl Popper famously argued that Marxism was a pseudoscience because it couldn’t be falsified. Neuberg’s research hints that Popper was wrong about this, but not exactly in the way the poor Marxists were hoping for.

March 31, 2014
Don't understand religion? Experiment with it.
Next Post

Public Square
Tradition and Innovation as Worldviews: Is Research into...
Science On Religion
TRENDING AT PATHEOS Public Square

Lynching preachers: How black pastors resisted Jim Crow...
Religion was no barrier for Southern lynch mobs intent on terror. White...
view all Public Square blogs
What Are Your Thoughts?leave a comment
Copyright 2008-2020, Patheos. All rights reserved.