Why do religions tell impossible tales? A testable hypothesis 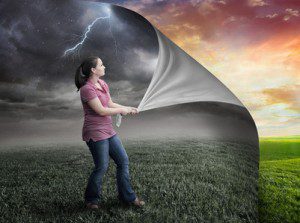 Einstein was probably the most quotable scientist who ever coined a phrase. Even people who couldn’t tell special relativity from Scooby-Doo have heard the famous quote that “Imagination is more important than knowledge.” But does this sentiment apply universally, without limits? Is it really better to conjure up fantasy worlds than to know, concretely and factually, how to build wind turbines or computer mainframes? Well, sometimes it might be. I think that when we fall victim to excessively rigid, causally determined stories we’ve told ourselves about the world, a glimpse of fantasy might be just what we need to slip free of our ideas about what’s possible – allowing us to stumble on new solutions to problems.

Religions are filled with stories where the laws of reality are flouted or broken. In the Book of Genesis, Sarah, Abraham’s wife, is in her nineties when God miraculously quickens her womb, allowing her to give birth to Isaac. Repeat: her nineties. (And this was in Old Testament times, when the average life expectancy was the age when people today move out of their parents’ basements.) Another story: Muhammad, an illiterate merchant, was accosted by the archangel Gabriel in a cave in a mountain high above Mecca, and commanded to recite the Quran. Despite his illiteracy (and his initial unwillingness), Muhammad was able to receive and compose the entire Quran, an unsurpassed work of Arabic literature.

Stories like these may be taught to children and retold in books the world over, but you’d be hard-pressed to find anything like them in real life. They break what cognitive scientists such as Scott Atran believe are our built-in expectations about how the world works. Atran argues that human brains come pre-packaged with expectations for folkmechanics, folkbiology, and folkpsychology. Respectively, these cognitive modules have to do with how objects work, how living things work, and how other people work. Evidence from cognitive science suggests that these sets of expectations are universal across cultures and are largely built-in rather than being taught.

For example, babies will act surprised if they see one object apparently passing through another, because this confounds their inbuilt expectation that two physical objects can’t exist in the same place and time. Violations of any of these intuitions, then, stand out, and make us pay attention – a sunflower plant that started edging toward you in the garden would be quite startling. But of course, religious stories and folk myths are chock-full of such counterintuitive happenings. Bushes catch on fire and speak to humans. Dead people are resurrected. Animals act like people. Why?

Robert Bellah, the late sociologist of religion, suggested that religious mythology arose in part from imaginative play, in counterbalance to what he called “the world of daily life.” In the world of daily life, things and events are related to each other in neat, easily understood logical chains. Commonsense intuitions about physical reality are taken for granted. You shake the tree, and apples fall to the ground. You do your job, and this causes you to get paid. This everyday cognitive mode is indispensable, because it leverages our brains’ basic assumptions about how the world works to achieve practical goals. You can’t live in the world without it.

But because the mode of “daily life” is so effective and practical, it can also completely take over our minds. Our brains busily crunch the incoming data of the world and transform it into stories of cause and effect: this happened because that happened. The car broke down because the gasket blew. Your boss stopped talking to you because you were late to the last meeting. In the world of daily life, a fair chunk of our mental energy is always devoted to producing these cause-and-effect stories. And these stories are so necessary for our survival that we’re tempted to live in them all the time.

However, there are two problems with permanently inhabiting our brains’ causal narratives. First, these cause-and-effect stories aren’t necessarily true. In fact, they’re often false, because we’re missing key information or because we’re operating on false premises. This is the case even though our minds rely on accurate, evolved intuitions about physics, psychology, and so forth. After all, the outputs of those intuitions are only as good as the data we give them. Whatever input we feed our brains, they’ll produce theories about it: causal stories, narratives of if-then, models of causes and effects. As the philosopher of science Karl Popper wrote, “our own intellect, the organization of the digestive system of the mind…is responsible for our theories.” And we’re predisposed to believe our own theories – even if they’re false.

Second, the mode of “daily life” – that is, the mode in which our brains present us with endless cause-and-effect stories about the world – inherently trends toward emotional negativity. This is because it’s driven by unfulfilled physical and emotional needs and wants. We need cause-and-effect stories about the world in order to solve problems, such as how to pay our rent or how to resolve an argument. But you can’t solve problems without knowing what caused them, or without knowing how you can change things to arrive at a solution. Psychologically, then, causality is inherently bound up with identifying and solving problems. In Robert Bellah’s words:

The world of working is governed by the means/ends schema: we could also define it as a world of striving.…the world of daily life is based on a fundamental anxiety, ultimately, though not necessarily consciously, arising from the knowledge and fear of death.

So here’s a model worth considering: people have a tendency to take their brains’ causal stories  too seriously, without questioning whether those stories are accurate. This experience can lead to depression or despondency, because the cause-and-effect stories can start to seem absolute and tyrannical when we dwell on them too long. You know the feeling: you’re glumly ruminating on your past failures, when gradually your brain starts telling nasty stories about how they were inevitable – for example, about how you were destined to mess up that interview because of how your family was dysfunctional. See how it works? This happened because that happened. Suddenly, you seem completely stuck. As Einstein put it:

Concepts that have proven useful in ordering things easily achieve such authority over us that we forget their earthly origins and accept them as unalterable givens.

So how do we clamber out of our minds’ narrative pits? Well, why not by encountering stories or images that directly contradict our cognitive expectations about what’s possible? By creating an internal mental representation of an impossible scenario, a story about miraculous happenings might loosen the mind’s death grip on its own causally deterministic model of reality enough to allow it to see that, in fact, it’s not stuck – that there are steps it can take to avoid bombing the next interview.

To put it simply, the mind’s causal stories tend to assume that whatever has happened in the past will determine what happens in the future. In the crisp realm of Newtonian physics, this is generally a good assumption. But in the unmanageably complex sphere of personal living, it is a bad one – particularly for a person trying to break a bad habit or learn a new way of doing something. By exposing ourselves to flatly impossible stories, we may be able to recalibrate our mental architecture to briefly challenge its own causal maps of reality – allowing us to make novel plans or take unexpected steps.

Of course, right now this is all rank speculation. But here’s the thing: it’s testable speculation. You could test this hypothesis, for instance, by having groups of test subjects come into a lab and write for 20 minutes about the most intractable, longest-term problem in their lives – an exercise called priming. This would psychologically incline the subjects to dwell on their problems and, if they were given time to ruminate on them, to start feeling trapped by them. Then you could give one group a straightforward essay to read on, say, economic theory. The other group, conversely, would read a fiction narrative, which would be the same length as the economics essay but filled with fantastical imagery and impossible scenarios.

At the end of the study you’d measure the two groups’ attitudes toward their life problems using a self-report survey. Or better yet, you could ask all the subjects to spend five minutes generating a list of as many possible solutions to their personal problems as they could think of. The prediction? In five minutes of brainstorming, the research subjects who’d read the fantastical stories with impossible imagery would list more possible solutions to their problems than the control subjects who’d read the straightforward essay.

You could try different varieties of this study design. For example, you could try using images instead of stories. You could compare specifically religious stories with, say, excerpts from a novel of magical realism. The point is, you could test whether fantastic stories  can shake our rigid cause-and-effect beliefs, and thereby stimulate adaptive creativity. This is a prime example (pun intended) of how hypotheses about religion’s origins and functions can be subjected to experimental checks. If the experiment were successful, it would suggest that the ubiquitous, impossible imagery in religious narratives and folktales around the world might, in part, serve as a solution to a uniquely human problem: believing too sincerely in the cause-and-effect stories we tell ourselves, such that we become stuck in self-fulfilling rumination. If so, imagination might really sometimes trump knowledge.

I’m taking a break this week from my series on theorists of religion. Check back in future weeks for more on religious studies theory!