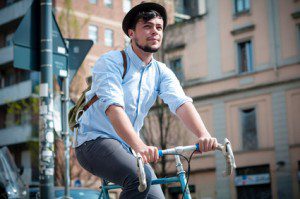 I love my bike. For the most part, biking is the only way I get around Boston – which is a postage stamp-sized city geographically (albeit a very densely packed postage stamp), and so is enticingly easy to traverse on two wheels. Recently, however, I got into a little altercation with a driver who didn’t like the idea of sharing the road. As much as I wanted to throttle my four-wheeled nemesis, part of me comprehended the depths of his indignation. This tension between cyclists and drivers isn’t just a passing annoyance of each day’s urban commute. It’s a window into some of the most basic, and most difficult, realities of 21st-century social living – and, like religion, it has a lot to do with social class.

It just so happened that I was taking up a whole lane of a quiet side street when it happened, biking alongside a friend so we could carry on a conversation. I was also biking with no hands. So, yeah, I was kind of asking for it. Now, it’s legal in Boston to take up a full lane on your bicycle, as long as you move aside if someone wants to pass. But it’s still obnoxious for drivers. So when I heard the sound of an engine approaching from behind us, I dropped my hands to the handlebars and began to steer rightwards to clear the lane. There were still 150 yards of space between us. I had plenty of time to get out of the way. But then the car honked. Loudly.

Dealing with drivers in Boston does not bring out the Buddha in anyone. All my goodwill for the driver instantly vaporized, I reflexively turned and made a rude hand gesture. In response, the car – a large, black SUV – accelerated angrily, swerved towards me, and then at the last minute swerved back into the center of the road and rushed past, with maybe six inches between us. If I’d hit a bump and fallen then, I’d currently be finding out if my late grandpa still plays cribbage.

As bystanders on the sidewalk yelled in shock at the driver, he screeched his urban assault vehicle to a halt and rolled down his window. He was a burly, tattooed guy with a mustache and a thick Boston accent. In a movie, I would have been Nerd Pie in about five seconds. But in real life, things took a different turn.

“Whaddaya doin’?” the guy exclaimed when I rolled up next to him. “You think you’re special? Like, ‘Oooh, look at me, I’m gonna ride with no hands and take up the whole street!’ Whassa mattah with you?”

As the tattooed man sputtered at me, apparently very concerned about my safety, it dawned on me that there was something strange about his facial expression. It wasn’t furious, as you’d expect. In fact, it was more like…well, hurt. Pained.

As our vigorous philosophical debate continued, it became clear that this guy wasn’t angry at me for blocking the road. He was resentful of me. He resented me for being there, for riding with both hands spread out to enjoy the breeze. The conversation wasn’t focused on my blocking the lane, or his urgent need to get home. It was focused on my attitude.

Why on earth would someone resent someone else for enjoying the breeze? Well, this guy had a thick Boston accent, tattoos, big arms. I come from blue-collar stock, and I can recognize it when I see it. It’s especially recognizable in Boston, where dialect and habits make it crystal-clear who’s working class and who’s Brahmin. He was one of those whom people from the local universities crudely call “townies.” This was his city, or it used to be.

And I was a skinny guy on a bike. My hands were smooth, except for my guitar callouses. My dialect? The most generic of educated-American blandness, totally unplaceable – something that’s increasingly becoming a marker of the educated upper middle class, as the bounty of rich dialects and local accents that once stippled the nation becomes relegated to every region’s working stiffs.

Around Boston and in other big cities throughout the country, bike-riding as a commuting mode is also largely something that the college educated do. In fact, commuting by bicycle is an excellent way to advertise your membership in that group. The slowly advancing nationwide bicycle infrastructure – the new bike lanes, the bike-share programs, the dedicated paths – is as much a sign of the wholesale gentrification of our hipper cities as it is an indicator of awakening environmental consciousness.

So what did I look like to that guy in the car? Like a guy who’s got it way too easy. A leech. A smug beneficiary of a world in which people who know the right codewords and the right people get to spend their lives getting educated and traveling. Meanwhile, people like him generally do the actual stuff: building the apartments, repairing the asphalt on boiling-hot summer days, collecting the garbage, working the assembly line. And despite all they’ve contributed, when their neighborhoods get gentrified, folks like him have to move out, pronto.

Nerd chic, which rules the roost in Boston, celebrates individuality and self-expression, not brawny strength. Riding with no hands on a sunny afternoon while talking about government-funded scientific research is practically the apotheosis of of everything nerds stand for. But there’s a catch. Nerd culture is a form of aristocracy. Its inhabitants’ wholesale, often self-righteous derision of anything that smacks of working-class culture – from cigarette smoking to non-rhotic accents to un-ironic religious belief – is an insidious classism that separates the Us from the Them.

I’m not defending the guy who nearly ran me over. But one of my favorite uncles, a lifelong worker in a box factory, often exhibited the same disgust and contempt toward the urban literati. From his perspective, it sometimes seemed like the guys who’ve never done an honest day’s work are the ones who enjoy all of society’s sweetest fruits. And sometimes a lifetime’s worth of frustration about this reality would come suddenly erupting from deep within, and there was nothing he could do to stop it.

My uncle passed away earlier this year, but I recognized that same frustrated emotion in the eyes of the tattooed dude. To him, I represented every privileged college kid who gets to be freed of the burden of real work – for life. I was the face of an urban culture that is rapidly pushing people like him to the peripheries, taking over their neighborhoods with precious cupcake shops and twee fashions. Because, believe me, if you have time and energy to design a steampunk wardrobe, or open a boutique store that sells high-end organic toys for pets, you’re not just pursuing your bliss. You’re also, as sociologist Thorstein Veblen would have described it, advertising your membership in a particular social class. One that doesn’t put up the drywall.

Religion, of course, is an important ingredient in this maddening gyre of social fashions and class broadcasting. Try mentioning that you study religion in a room full of educated techies in Cambridge; the silence that falls over the room is thick enough to swim through. As religion and faith become more identified as accoutrements of the working classes, they become socially toxic in the eyes of the tech folk and the educated upper middle class. And with every comment about the foolishness of faith, the social wedge gets hammered in deeper.

My little encounter happened in a neighborhood that is currently gentrifying at approximately the speed of sound, where I know dozens of people (myself included) who have recently been turned out of their apartments so that developers can turn them into luxury units. (By 2016, all of Boston will be luxury units.) I don’t know if the dude who nearly ran me over is one of those getting displaced; for all I know, his family has owned a house in Southie since 1950 that’s now worth a million dollars. And I sure wouldn’t act like his best buddy if I met him again. But I do know that there are reasons for people like him to be resentful of people like me.

July 14, 2014
The Wave of the Future: Experimental Religious Studies
Next Post

July 28, 2014 Informal Study Finds Bloggers Can’t Tell Fact from Fiction
Recent Comments
0 | Leave a Comment
"menangqq adalah situs permainan poker Online dengan server kualitas terbaik dan bonus ratusan juta rupiah"
berbonusqq When the Social Order Has Legitimacy ..."
"This post is spot on. The problem is accentuated by a disparagement of cultural traditions ..."
Positivist Is Academia a Failed Initiation Rite?
"Another example of WIERD being, well, the weird exception to the rule.The "missing second half" ..."
Kevin Kostlan Is Academia a Failed Initiation Rite?
"Good points, Elritus.I think often times folks are right to resent a system (or System) ..."
connorwood The Symbolism of Old Gods and ..."
Browse Our Archives
get the latest from
Science On Religion
Sign up for our newsletter
POPULAR AT PATHEOS Public Square
1