Our Hope is in Christ, Not Caesar

The good news is that the next president will not be Hillary Clinton.

The bad news is that the next president will be Donald Trump.

Let me, however, disabuse some hopes and quell some fears by telling you what President Trump will not do.

President Trump will not do one thing to stop one abortion in the United States.

He will not end Obamacare.

He will not build a wall or round up folks to deport them.

The reason I say these things is because Donald Trump does not care about any of them. Mr. Trump is a liar. He said these things in order to appeal to the Republican base. He doesn’t mean those words any more than he meant the words “till death do us part.” If you think otherwise, he will soon disabuse you of that notion.

Of course, I could be wrong; I’m fallible. If I am, I hope I am wrong about the first, rather than about the second or third.

But then, what will President Trump do?

I have no idea. And that’s the part that worries me, because I don’t think it could possibly be any good.

Donald Trump, however, without meaning it, could help to reacquaint American Catholics with some important fundamentals, and if so that would be a good thing. He may do it precisely by thumbing his nose at, for example, his promises to promote anything approaching pro-life legislation or pro-life Supreme Court justices.

I hope, however, that I am wrong about Donald Trump. I would far rather say “I was wrong” than “I told you so.”

Whatever the case, I hope there will be reconciliation and restored friendships between Catholics before January 20. If I have said anything or done anything to convey the impression to anyone that I was calling the genuineness of their Catholicism into doubt, or questioning the legitimacy of their real concerns about Hillary Clinton, solely because they were voting for Donald Trump, then I want to use this opportunity to say I am sorry and that that was never my intention.

Having said that, any Catholic who did vote for Donald Trump, and uses this opportunity to engage in triumphalism about it, or to continue to question the Catholicism or salvation of anyone who voted for Hillary Clinton, or who voted for a third party candidate, or who did not vote at all, will not be serving the interest of reconciliation in any way. If you continue to deny the legitimacy of their grave concern about Donald Trump and unwillingness to vote for him, you will not be serving the interest of reconciliation. No one’s Catholicism should be put into doubt, no one should be made to feel they are a lesser Catholic, because their personal political judgment, in a year when both candidates were horrific, differed from your own.

Truth be told, we will have to be united as Catholics in order to fight for the truth of our faith in the years ahead. Because (and I must say this again) Donald Trump will be no ally to us. If you think otherwise, I promise you he will disabuse you of that notion. Our ally is Christ, and our unity is Christ–not any political cause, not any political leader, but Christ and Christ alone. 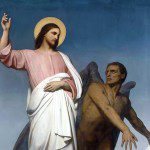 November 8, 2016
The Evil of Abortion Does Not Justify Fr. Frank Pavone
Next Post 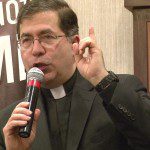 November 10, 2016 But Will Fr. Frank Pavone Take Instruction From His Bishop?
Browse Our Archives
Related posts from To Give a Defense