Have you heard that, over the course of just two years, Pope Benedict XVI defrocked four hundred—that’s 400—priests who had been guilty of child sexual abuse? The story is right here, in an article that cites documents released by the Associated Press. Chances are you heard none of this back in 2011 and 2012, when it all took place. But according to the story in the Christian Post:

In 2005 [That would have been Benedict’s very first year as pope.] the Vatican began reporting numbers of defrocked priests and authorized Church trials against 21 accused clerics. Since 2005, the numbers began to increase to between 300-400 cases a year in 2007 and 2008.

300-400 Church trials a year against accused priests? Did you know about any of that? Why, I thought that Benedict had just been shifting these priests around from parish to parish and trying to keep everything hush-hush.

In 2010, following a wave of media coverage of sex abuse scandals in Europe, 527 cases were reported, though the Vatican did not report how many priests had been defrocked. In 2011 and 2012, however, 260 and 124 priests were defrocked respectively.

The report, prepared by the Vatican [Note this now.] was put together as part of its testimony to the U.N. committee on Thursday, reported the Associated Press and was released a day after the group harshly critiqued the Catholic Church’s handling of the global sex abuse scandal.

Despite all that, the United Nations has just issued a “devastating” report that demands “immediate action.”

According to the UK Guardian (here), the United Nations demands that the Vatican “immediately remove” all clergy who are known or suspected child abusers.

Or suspected? The mere point of a finger is enough? Without trial? Without due process? Guilty until proven innocent? Or—to think of this!—without the chance to even try to defend yourself?

There is a word for this, and the word is totalitarianism. The United Nations is demanding that the Vatican act as totalitarians toward priests who are merely accused, and defrock them without even so much as a trial within their own Church—even though such trials led to four hundred priests being defrocked in the course of two years.

It seems, from the evidence reported in the Christian Post, that the Vatican acted in more than good faith by trying to sort out who was truly guilty of abuse, conducting trials, and defrocking those proven guilty. That is how justice is meant to work.

But no: Any priest who is merely accused, hand him over to us. Now. Schnell! schnell!

If you have not figured it out by now, the United Nations report is not about justice. It is about taking down the Catholic Church and attacking the priesthood itself. For if a priest merely has to be accused, and the United Nations demands that he be defrocked “immediately,” then nothing is to stop the enemies of priests and the enemies of Catholicism from just going around pointing fingers. No one is demanding that the charges be proven. It’s merely “off with their habits and turn them in to us; we’ll handle everything from here.”

That will go well, I am sure. There will be show trials. The world will think justice is finally being done, which the pope adamantly refused to do.

The UN’s scathing attack on the Vatican over the abuse of minors will get all, or most, of the media coverage. Buried in the report, however, is this:

As part of its wide-ranging remit, the UN committee also expressed concern about how the Holy See’s stance on contraception, abortion[,] and homosexuality was affecting minors.

One wonders: Whence did the United Nations get such a “remit,” that it may lecture the Catholic Church on its moral teachings? What does the one have to do with the other?

But it is therein that we see what their real agenda is. The abuse of minors is a cover. The agenda is to use those sad and evil stories as an excuse to bully the Catholic Church to change its teachings to be more in accord with the world’s own sinful desires. The agenda is anti-Catholic from front to back and up to down.

The Church has been handling the sexual abuse as it should. But the agenda of the UN is to spread through the world the idea that the Catholic Church is an evil to be fought. Unless the Catholic Church permits the murder of the unborn, it is not doing enough to stop the harm done to children.

Unless the Catholic Church permits contraception, it is not doing enough to ensure that children can live.

And unless the Catholic Church says that men can stick their organs in places they were not designed to go, it is not doing enough to promote the dignity of the human body.

But Pope Francis is not going to change the Church’s teaching. He has no authority to do any such thing; the truth is what the truth is. We know that. But he still does require our prayers and our sacrifices.

For when Pope Francis does not change the Church’s teaching—when he defies the United Nations—what happens? Will they try to arrest him under international human rights laws? There has been talk of such things (for example, here, or here).

“Hey-a, Pope Francis, you don’t-a play ball by being that liberal we say you’re going to be, I hate to-a think of what might-a happen, y’know? Huh?”

And hate, when it is out in the open, is ugly. We know. We have seen it before. 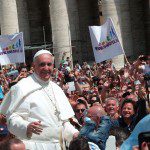 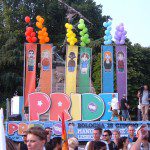 February 7, 2014 Z-ophobia, FEMEN, & Other Quick Takes: 7QT XIII Seriatim
Browse Our Archives
Related posts from To Give a Defense