Protecting the Self-Esteem of Boys

This is a post written by my two good friends, Michael Gurian and Gregg Jantz, adapted from their soon to be released, must-read book, RAISING BOYS BY DESIGN, by Gregory Jantz, Michael Gurian, and Anne McMurray (Waterbrook, September, 17, 2013) 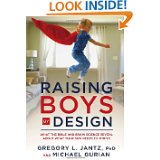 Everywhere we turn, people are wondering how to protect a child’s self-esteem. In few areas today is this question more prevalent than in our cultural conversations about how to help boys grow up to be loving, wise, and successful men.  In our new book, RAISING BOYS BY DESIGN, we share both scientific and Biblical research that calls on parents, teachers, and caregivers to distinguish between “short term self-esteem” and “long-term self-esteem.”  Character building, the holy grail of child development, is ultimately about long-term self-esteem.

Boys know this already, we believe.  They are pretty smart about whether their self-esteem does or does not need praise at a given moment, in a given context.  They may not voice all of this aloud, but they wonder (though not in these words):   Why does our culture assume that self-esteem is best protected (or elevated) when we praise every child constantly?  Why do we so often try to make sure no child loses?  Why do we attempt to make sure no child feels bad for more than a moment?

Protecting and building self-esteem is indeed crucial for healthy development, but the effort to protect near-term self-esteem at all costs can, in the long run, hurt long term self-esteem.  Our kids sense this.  They sense there is risk to their developing psyches when we adults try to…

~ remove the idea of earning one’s success from child development

~ force feelings and emotions to surface so that they no longer make us as adults uncomfortable, even though the child may need to ruminate on them much longer for his own character and self-discipline development

How Struggles Build Resilience and Strength

When we place protection of short term self-esteem above character building and self-discipline development, we end up robbing boys (and girls) of the chance to make and learn from the kinds of mistakes and struggles that ensure high self-esteem in the long run.  We say to these young heroes, “We will always be here to hover near you to make sure you never have to go through the undergrowth of your story.”  We say:  “We kind of want you to gain strength, yes, but not if it means you really face hardship in battle.”

Yet, isn’t it also the undergrowth, the dark stuff, the difficulties, the struggles, the suffering, and yes, the battles, that build a hero’s strength, resilience, and self-confidence?  Mustn’t the boy struggle constantly to understand his own inner demons and flaws, and to understand pain and evil in the world for what they are?  Can we imagine Moses, Jesus, David, Paul, or any hero who became a true servant of God (with high self-esteem as an adult) who did not go through (all the way through) suffering during his development?  As Rev. Tim Wright, co-author of the Following Jesus: A Heroic Quest for Boys rite-of-passage program recently put it, “To overprotect boys is to deny them their own journey of becoming strong, caring men.”

While we must protect a child from abuse, we need not protect our sons from struggles.  While we have, as a culture, come to overly protect short term self-esteem because we don’t want any child to be abused–we do not need any longer, however, to exaggerate the positive benefits of non-competition and constant praise.  We can focus again on experiential character-building.

As you study your son and his life, we hope you will take talk in your family and community about all this. If you see abuse happening—if, for example, a coach is being cruel and repeatedly singling out a child for damaging humiliation—this is of course a place to intervene to immediately.  But if abuse is not occurring, we hope you’ll talk about the value of failure and frustration that temporarily hurts self-esteem but in the long run will build enduring self-esteem and character.

Thomas Edison’s perseverance can be inspiring in this regard. Edison reportedly said, when asked about his failures to come up with a working light bulb, “I have not failed. I’ve just found ten thousand ways that won’t work.” He also said, “Many of life’s failures are people who did not realize how close they were to success when they gave up.”  Certainly it is true that failure can stop a boy in his tracks. Fear of inadequacy can rear up like an impenetrable wall on his road to manhood. Boys can become depressed. Excessively critical perfectionism on our parts can harm our son’s self-esteem in both the short and long term.

But boys also need to know that we expect them to accept failure when it happens, learn from their mistakes and those circumstances, and find ways to redeem the failure and build self-discipline on their own. This is all part of character building, long-term self-esteem, and, ultimately, every young hero’s quest.

September 5, 2013
The Short-Sighted Battle to Tame Boys
Next Post

September 12, 2013 The Tyranny of Sameness--Robbing Boys of their Boy-ness
Recent Comments
0 | Leave a Comment
Browse Our Archives
Related posts from Searching for Tom Sawyer