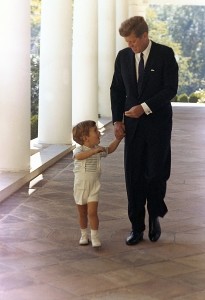 I don’t think it was intentional.  Could it be that the issue of boys is simply not on his radar?  He was raised by a strong woman.  He is married to a strong woman.  He is raising two girls.  He lives in a woman’s world in that sense.  He’s sensitive to the issues of women.  When charges of a “war on women” are shouted through the media, his ears perk up.  When the old storyline of girls falling behind boys is paraded again and again, he listens because he has daughters.  Raise the issue of boys, and it’s simply not on his radar.  It’s not that he doesn’t care.  Could it be that he is “tone deaf” to the needs of boys?

September 12, 2013
The Tyranny of Sameness--Robbing Boys of their Boy-ness
Next Post

September 20, 2013 No Girls Allowed! Why Boys Need Boy Space
Recent Comments
4 Comments | Leave a Comment
"This is a fascinating idea. Having raised boys and a girl, I can promise you ..."
ckahrl It’s Been 50 Years Since a ..."
"Um, Jesus is already famous. This reminds me of the whole "Good News" Christian trope. ..."
Adam King The Purpose of Boys: A Podcast ..."
"So Jesus needs our help in the Name Recognition area? Really???? If he did, he ..."
Jezebel'sOlderSister The Purpose of Boys: A Podcast ..."
"Apparently men also make unevidenced generalizations based on outdated stereotypes."
Adam King Bathrooms, Male Stereotypes, and Granddaughters
Browse Our Archives
Follow Us!