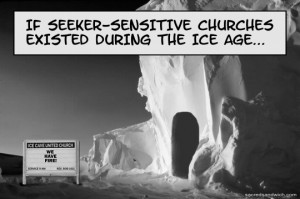 (Excerpt from Sunday Schooling Our Kids Out of Church! The True Story of How One Congregation Dropped Sunday School to Save its Soul.)

I was the Associate Pastor of a large, Lutheran, Seeker-driven congregation in the Phoenix area from 1984-March 2005. And I loved every minute of it!

Every day was energized by the creative passion to find new ways to connect with people disconnected from the church. My particular area of focus was on the Seeker Worship Service. Each week we dived into the challenge of creating an innovate experience that would speak the language of non-church going Baby Boomers, using new forms of music, drama, images, videos, and practical, Christ-centered messages.

For many years, 60% of those joining our congregation came from an “unchurched” background, meaning they hadn’t been involved in a congregation for 5 years or more. During our Newcomer orientations we heard compelling stories of people and families connecting with faith for the first time in their lives.

In addition to creating dynamic, attractional worship experiences, we looked for ways to lead people deeper into their faith through seminars, Bible studies, children’s programs, events for Seniors, and youth ministries. We hosted community-wide concerts featuring popular artists who were people of faith and created our own outreach events around Christmas time.

We grew so quickly that we eventually sold our 10 acre property and relocated to a new campus of over 100 acres. For 15 years we hosted conferences for pastors across the country, offering principles and training for reaching their communities with the good news of Jesus.

I’d wanted to be a pastor since I was in 2nd grade…and this was the church of my dreams.

During those years many outsiders declared churches like ours “shallow.” But I can say, from an insider’s perspective, that God was at work in profound ways in the lives of our people. Like every congregation, we had people who took their faith seriously and those who relegated faith to the bottom of their to do list. But overall, you can’t build a large congregation, and especially an outreach congregation, without people of deep faith. The cost is far too high.

By the turn of the century, the Seeker movement began to show its age. We did a great job of reaching Boomers, but what reached Boomers didn’t seem to reach the next generation. Some Seeker congregations were able to reinvent themselves for the next generation. Others struggled (and continue to struggle) with how to be the church in this new century.

In the mid-2000’s our congregation was feeling that change. One of the outcomes was the planting of a new church in March of 2005. I became the Senior Pastor of that new start.

While the Seeker model was still in my DNA, I knew that what we had done for 20 years wouldn’t necessarily work in this new start. For one thing, we were no longer a congregation of thousands but of a few hundred. We didn’t have our own campus and only had the school rental facility one day a week.

Looking back now on our first 10 years in this new church, and further back to the congregation that started us, I think I’m ready to make a few confessions.

Before I do, I want to say this clearly: I believe that the Seeker Movement was (and still is) a movement of God. It was not a movement without flaws and excesses, but it was a movement that woke us up to the fact that the primary mission of the Church is to make disciples, and that that mission begins with connecting Jesus to those not yet connected to him. While the attractional model of mission may not be as effective as it was in the 1980’s and 1900’s, the Seeker Movement put mission back into the center of the life of the church.

Confession #1: Boomers, especially those who left the Church in the 1970’s and 1980’s, saw ritual as dull and lifeless. Finding new ways to embed the faith in them was imperative to reconnecting with many of them.  So we dropped many (most) of the rituals from our parent’s worship and found new ways to embed the faith.  The confession: In this new world where people have so few roots to stabilize them, throwing out the bathwater (rituals) robs our people of faith-rooting touch points. Our primary form of worship is still “contemporary.” However, one of the things we are trying to reclaim, lost during the Seeker years, is our touch point with rituals that root us in the faith. From day one we made The Lord’s Supper a weekly part of our worship experience. We’ve included updated versions of old hymns. And lately, we’ve been learning the Apostles Creed. As a grandpa, I’m re-seeing how important it is to embed in the minds of my grandkids certain statements like the Creed.

Confession #2: Two thirds of all Boomers left the Christian Church. They found their parents’ church boring and irrelevant. We needed new wineskins in order to call them back to Christ and his Church. So for good reason we laser-focused our creativity on reaching them.  As the movement grew, and Boomer kids began to move into young adulthood, we realized that our kids would probably not assimilate into a Boomer-oriented church (in part because they weren’t Boomers, and in part because we raised them in Sunday School, not worship–see confession #3). In seminars I suggested that perhaps the answer would be found in larger churches seeing themselves as a church of congregations, with different worship services for each generation, and that small churches may have to focus on one generation and reach those who have an affinity with that one generation. The confession: That may still be the answer for some (see emerging churches, for example). But I’m increasingly convinced that one powerful way to be the church today is to go back to the future and build intergenerational worshipping communities—Worship experiences where all ages worship together using the gifts of all ages, the music of all ages, the language of all ages. No easy task. But the downside to generation-specific worship is losing out on the unique gifts of the other generations from children to youth to young adults to midlifers to the old wrinklies (as the Brits call them). Doing intergenerational worship will have to look different than it did in the 1950’s, but I think that if we can figure it out in our contexts, it could jump start some of our congregations.

Confession #3: We offered amazing programs for all ages in the Seeker model. We had the resources, the staff, and the facilities to be a 7 day a week church. While the Seeker service was the main attraction, everything else we did during the week was geared to equipping people to follow Jesus. I think, for example, of our youth choir. 40-60 High School students singing, acting, playing in the band, touring, etc. It provided a place to use their gifts and talents. It provided leadership opportunities. It shaped faith. Both of my kids would say that that experience was a primary faith shaper as they look back on those years. The Confession: We probably programmed our kids out of the church. We made Church the primary place of faith formation, something the church was never meant to be. We encouraged families to outsource their faith to the church when the church should have been equipping families to make the home the primary place for faith formation. We separated families from each other, sending them off to age-specific growth experiences. The result: for all the good the Seeker Movement did (and it did a lot of good), its legacy is the most unchurched generation in the last few hundred years in the history of our country. Programming isn’t bad. In fact, there are many things a church can do that a family can’t. But for the most part, deep faith is forged in the home, every day.  Churches committed to a new (actually ancient) mission of equipping households to be the primary place for faith formation could very well reverse the trend of people no longer connecting with Christ or his Church.

I still feel honored to have been a part of one of the great movements of God in the last part of the last century. Good Kingdom stuff happened through the Seeker movement.

But the best of movements eventually invite us to see our blind spots. These confessions are some of the blind spots I see in my own ministry that we are now addressing.

The world has changed dramatically since the 1980’s and 1990’s. While the Gospel never changes, the way we take the Gospel to the world does and has to change.

I’m excited to see where God leads his Church next.

(Excerpt from Sunday Schooling Our Kids Out of Church! The True Story of How One Congregation Dropped Sunday School to Save its Soul.)

October 15, 2014
The New Utopia: A Genderless Society?
Next Post

January 20, 2015 A Dad's Playbook for Forging Faith in his Kids--Part 1
Recent Comments
26 Comments | Leave a Comment
Browse Our Archives
get the latest from
Evangelical
Sign up for our newsletter
POPULAR AT PATHEOS Evangelical
1