The fundamentalist Christian Right movement has changed its strategy but not its stripes as it continues aggressively trying to insinuate faith-based dogma into American voucher schools and children, an excellent New York Times article this week by columnist Michelle Goldberg illustrates.

Southern states circumvented the constitutional civil-rights of freed slaves during Reconstruction after the Civil War by terrorizing blacks and constructing a rigidly apartheid social system. Today they circumvent the Constitutional religious-establishment clause as it pertains to education by embracing new disingenuous tax-funded voucher and “scholarship” programs that help support private, mostly Christian, schools.

In these senses, the South has yet to honorably accept its defeat in the Civil War or to acknowledge that its antebellum worldview is still at odds today with the Constitution and, increasingly, with wider American culture.

When the U.S. Supreme Court ruled that racially segregated American public schools were unconstitutional, in a historic 1954 decision (Brown vs. the Board of Education), an embryonic version of the modern Christian Right movement emerged. To get around that court ruling, Southern states simply founded countless whites-only private schools. They called them “freedom of choice” schools.

But then in 1976, the high court also outlawed segregated private schools, ending the Southern academies’ federal subsidies and tax-exemptions, as well. This is when the full-fledged Christian Right arose. Still, such schools remain, and their stiff tuitions and legal-but-elitist acceptance policies purposely pose too high a bar for many if not most black students. Today, Christian faith activists also relentlessly encourage school voucher and scholarship programs—the lion’s share of which support private Christian schools. They are aided and abetted by Secretary of Education Betsy DeVos, who has long campaigned for Christianity to be a bedrock of American school curricula.

The Rev. Jerry Falwell, a Baptist minister who later founded the Christian Moral Majority movement in America, in 1958 gave a sermon praising school segregation and excoriating the Supreme Court’s ruling against it, Goldberg wrote. “When God has drawn a line of distinction [between races], we should not attempt to cross that line,” the Rev. Falwell proclaimed. In the sermon, he added that integration “will destroy our race eventually.” In 1967, Falwell founded the Lynchburg (VA) Christian Academy, which later was renamed Liberty Christian Academy, a Christian educational institution exclusively for white children. It was one of many such so-called “seg academies” that sprang up in the South after segregated schools were outlawed, Goldberg wrote.

So, the Christian right represented a virulent nexus of Christianity and racism that continues today, as faith activists try to hijack our schools. A key element of this unholy mix is a long-nurtured outrage against secular virtues seen as not only anathema to Christian practices and rights but unconstitutionally suppressive.

Which is a key reason we are now enduring this dangerous paradox: A manifestly un-Christian, amoral, racist demagogue was elected president of the United States by a huge majority of supposedly Bible-believing evangelicals who are apparently more interested in stopping legal abortion than thermonuclear war.

Goldberg notes that Tony Perkins, leader of the uber-Christian Family Research Council, said this week that President Trump deserves a “mulligan”—a do-over—for his past depraved moral lapses because he is “willing to punch the bully.” By “bully,” Perkins meant former president Obama and “his leftists.” Such inclusive, Christian sentiments. Falwell’s son, the Rev. Jerry Falwell Jr., now head of his father’s Liberty University, also gave the president a moral mulligan. Falwell said this week that a person who “lusts after a woman in your heart” is as guilty of sin as someone who actually does the deed. So, apparently, because we’re all sinners we don’t have the right to criticize others for their lapses. Right. As if Christians don’t have an extravagantly rich past of doing just that.

Amazing the moral contortions supposedly pious people are willing to make to get legislation passed. 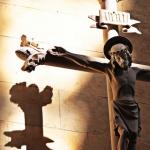 February 1, 2018 Reason and Religion, Oil and Water
Browse Our Archives
Related posts from The Secular Spectrum