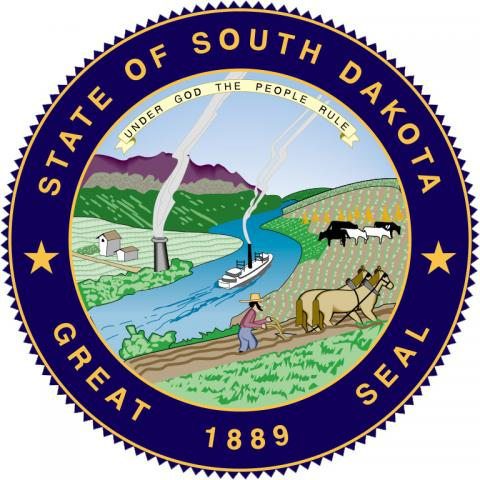 It’s bad enough, but the real issue isn’t the silliness of a few dozen South Dakota state lawmakers who originally wanted to criminalize any inexact representations of the official state seal—even satirical ones. It’s church-state separation.

What should concern us most is what has long been embedded in the state seal— the state’s official motto: “Under God The People Rule.” And it’s not a problem because the phrase is mildly ungrammatical (there should really be a comma after “God,” for clarity).

What’s far more problematic, and probably even unconstitutional, is that the motto is an undeniably religious statement—on the official symbol of South Dakota and its government. In a secular republic.

The seal’s divine evocation is a corruption of our Founders’ intent. In 1782, the U.S. Congress adopted the secular phrase E pluribus unim (out of many, one) as the national motto, and it thereafter inscribed the nation’s official great seal for 174 years. But Christian faith activists, in the tremors of existential anxiety at the height of the Cold War and the attendant un-American, anti-Communist McCarthy witch hunt in 1956, successfully appealed to Congress to change the national motto to “In God We Trust.” So we also ended up with God on South Dakota’s state seal, as well, contrary to the secular Enlightenment ethos of the nation’s founding.

Some might argue that invoking “God” is not, by itself, religious in nature, as conservative Christians have long maintained. As if everyone, without question, believes in God as they do that lying is wrong, or certainly should, right? But, no. Roughly a quarter of the state’s (and nation’s) population today are irreligious unbelievers and voluntarily unchurched, and this subgroup is growing fast. Besides, “God,” by definition, is a fundamentally religious concept. The standard definition of religion is that it always involves devotion to supernatural beings—which is to say insubstantial, invisible imaginings. Which generally involve omnipotent divinities. Which are Gods. Which are the core essence of religion.

So, our state seal in South Dakota, which accompanies every piece of official business in and out of the state, proclaims to all that an invisible deity—on behalf of each and every one of us South Dakotans—is the overarching authority of our public governance. Not us.

Whether or not any of us even believe such an entity exists in the first place.

This question has come to the fore because dozens of the state’s legislators recently endorsed House Bill 1102 (prime sponsor is Rep. Sue Peterson of Sioux Falls), which was later revised after public blowback and now specifies that alterations of the seal for artistic or satirical purposes are exempt. If passed, the original wording would have criminalized (as a Class 1 misdemeanor) any replication of the state seal not “full and complete” and lacking the state motto invoking God. The bill was crafted after Rep. Peterson noticed the state motto missing from seal representations on official apparel of state employees, clothing made at the state’s women’s prison.

Rep. Peterson has said she hoped the bill would aid the secretary of state’s office in enforcing unadulterated applications of the seal, as though a lack of relevant law was the problem. The lawmaker said she thinks the prison “just didn’t have the right piece” for creating proper seal depictions. One would think this could be easily solved without a new law, by just making sure the prison is provided the with the right piece.

But she also said she was aware of other “misuses” of the seal, including when artists take “artistic license” in altering the official design for their creative purposes. “It’s a branding issue, and [the seal] needs to be honored and respected,” she told the Sioux Falls Argus Leader.

However, Robert Mehling, a Sioux Empire Podcast host, suspected the bill aimed instead to discourage free speech. Mehling says he feels the bill targets expression such as an illustration he used on his show that satirically represented the state seal. Protesting state law enforcement’s alleged forced catheterization to collect urine samples from suspects, the podcast displayed a seal where the rolling hills of its official design were replaced by a drawing of a person being tortured on a wheel during the Inquisition.

“I read the bill, and it felt like they were specifically talking about our artwork,” Mehling said. “It’s specifically targeting small online satirical artwork.”

Peterson denied that Mehling’s altered state seal was the motivation for the House bill. Still, she urged people to reconsider ever using the seal without express official permission and to “not do it” if its inconsistent with the Constitution and state law.

The South Dakota House of Representatives passed HB 1102 by a 56-6 margin on Jan. 25, followed by Senate approval (34-0) on Feb. 5. Yet, in one sense, nothing changed: The state motto explicitly glorifying “God” remains completely unaltered—and arguably unconstitutional—on the official state seal. Thus church-state separation here is moot.