I had an opportunity to hear a wonderful husband-wife musician duo as part of a recent trip to Indianapolis:  Ashwin Krishnan Subramanian and Lakshmi Chandrashekar Subramanian presented their contemporary devotional music program to the attendees of the 12th Annual Hindu Mandir Executives’ Conference. Hindu temple executives from around North America and the next generation of leaders from various Hindu American organizations, such as Sewa International and Hindu American Foundation (whose Board I serve on), were in attendance, and the evening consisted of visiting the beautiful Hindu Temple of Central Indiana, where we heard the melodious music made by this young couple. Enchanted by their spirit and the sounds of interfaith harmony that stayed true to the couple’s pluralistic Hindu roots, I asked for their story, and Lakshmi obliged.

We met in NYC in 2011 as members of a Chinmaya Mission study group, and worked on our first contemporary devotional album together in early 2012. By that point, Ashwin had left his software engineering career and was a full-time composer and producer. Prior to that, he graduated top of his class from popular Bollywood music director A.R. Rahman’s music conservatory and worked on several Indian films such as Raavan, Delhi 6 and Adaa. In my case, I was a financial analyst in Bloomberg L.P. Once we started collaborating, we realized our common love for devotional music & poetry, and I took the plunge and quit my job in finance. I went on to do graduate work at Stanford on the Bhakti Movement, focusing on the hagiography and poetry of Mirabai. My intent was to integrate my scholarly work with music to contextualize our live shows in multi-faith engagements.

Today Aks (Ashwin’s initials; which means “reflection” in Urdu) and I serve as a full time composer-vocalist duo under our company Eclipse Nirvana. We travel across North America  to universities, conferences, fundraisers, and have shared our music in Singapore, Indonesia, and Zambia. Our live shows combine contemporary music – including World music traditions, Electronic music –  contextual storytelling and visual media. Our goal is to communicate the great bhakti (devotional) poets’ universal messages of love, peace and harmony to today’s audiences.

Lakshmi Chandrashekar Subramanian is a vocalist, a scholar, a performer – she is obviously doing what she loves, with someone she loves, who is equally talented. Aks and Lakshmi are fortunate to be partners on this journey, charting new career paths for themselves – and so are all of us, as we listen to their contemporary devotional music, rooted in the traditional environment provided by their respective families.

Aks is originally from Palakkad in India, and moved to Maryland when he was five. Classically trained in Indian vocal music from his grandmother Jaya Bala, he also learned from renowned visiting gurus from India, picking up Sanskrit chanting from his grandfather who chanted every day. He even learned classical dance from his mother Shobha Subramanian, Dance Director of the Jayamangala School of Dance. As a teenager, Aks was influenced by AR Rahman’s musical style, and started composing music while pursuing a bachelor’s degree in software engineering at Virginia Tech.

Lakshmi was born and brought up in Singapore, and grew up taking trips to visit family in Chennai, India, several times a year. She was enrolled in classes at the Hindu Center, Singapore at the tender age of three, and by the time she was five, started Carnatic vocal and Bharatanatyam training at the Singapore Indian Fine Arts Society (SIFAS) under several gurus. In particular, she developed a passion for bhajans (devotional songs) and stotras (Sanskrit hymns) while singing and recording devotional albums with her mother and first guru, Padmini Chandrashekar.

Both these talented professionals found common ground at Chinmaya Mission NY, as they had grown up attending Chinmaya Balavihar and Yuva Kendra, in D.C. and Singapore respectively. Their love for music and spirituality may be what initially brought them together – but it is apparent that they would love to bring their pluralistic approach, to composing and performing spiritual music, to a broader audience of global music aficionados. 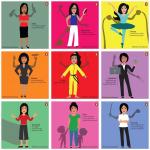 September 30, 2017
Finding the Goddess Within: Protect Us From Fear
Next Post 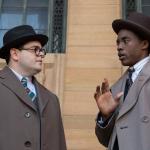