The days before and after Diwali are always surrounded by a surfeit of activities: religious events, family gatherings, a festive dinner at my local temple and many other opportunities for socializing and cultural entertainment that create an ambience reminiscent of “back home” for so many Indian immigrants. Living in a religiously diverse suburb of metropolitan Detroit, my husband and I invited several friends from the broader community to be our guests and celebrate with us at the Temple’s annual dinner. Our guests included a city councilwoman, the daughter of Iraqi Christian immigrants, a lively young woman working on a local political campaign, the daughter of Mexican immigrants, and the rabbi of the only other non-Christian house of worship in Troy, Congregation Shir Tikvah. A conversation with Rabbi Aura Ahuvia of this synagogue, named the Song of Hope, lifted my spirits and brought out the essence of Diwali. Having just watched the newly-released Marshall, I felt keenly the weight of the work required to ensure justice. Her words reminded me that we have a shared commitment to do good, and whether we call it tzedek or dharma, we can work together and celebrate the victory of the light of truth over the darkness of ignorance and fear.

Marshall is the story of how attorneys Thurgood Marshall and Samuel Friedman struggled but successfully defended African-American Joseph Spell.  Wealthy socialite Eleanor Strubing accused her “chauffeur-butler” of first raping her multiple times in her Greenwich, Conn., mansion, and then throwing her off a bridge. She was found bedraggled and wet to the bone by two truck drivers – the story quickly became front page news on the East Coast, covered by the NY Times and its ilk. After hours and hours of intense police interrogation, it was reported that Spell had confessed.  In the South, such accusations had been cause for lynchings;  in 1940, the North thought it was above such racism, but the papers screamed the story, and other Westchester families began to fire their domestic help, fearing what their African American servants might do.

At this point in time, the National Association for the Advancement of Colored People (NAACP) was focusing its efforts on the widespread issues in the South, and was not well funded in the North. However, their top lawyer, Thurgood Marshall, partnered with Samuel Friedman, a Jewish lawyer from Connecticut who was the NAACP’s hope for a fair trial. Friedman was able to take Marshall to lunch at a hotel restaurant only because he was the hotel’s lawyer: a 1933 Connecticut law banning such discrimination was not enforced. And this was only the tip of the iceberg – NAACP co-founder W. E. B. Dubois had left the organization because of its approach towards addressing racism in the North – he wanted black men to be treated as men, and segregation to be a choice, not something that was enforced.

Marshall was simultaneously working on Lyons vs. Oklahoma: impoverished black farmer W.D. Lyons, wrongly accused of three murders, was viciously tortured, forced to handle the victims’ remains, and eventually coerced into a confession. This trial eventually went to the Supreme Court, Marshall lost, and an innocent man was convicted.

In Connecticut, like in Oklahoma, most people did not believe in Spell’s innocence – including Samuel Friedman, the young Jewish lawyer hired by the NAACP. Marshall was brought to help him and supported the NAACP’s policy to defend innocent clients, telling his co-counsel that he did not believe a word of Strubing’s story. The two – an African American and a Jew, partners working against a backdrop of racism and anti-Semitism – went on to make the case for an innocent man – but this criminal defense trial was not a major focus in the Supreme Court Justice’s career.

Marshall’s statement nearly 50 years later in 1991, on his retirement from the Supreme Court, underscores the criminal defense system’s ongoing struggle with racial (in)equity: “The legal system can force open doors, and sometimes, even knock down walls. But it cannot build bridges. That job belongs to you and me.” And as I discussed the importance of justice and equity, connecting the Hindu concept of dharma with the Jewish concept of tzedek with Rabbi Aura, the light was lit, another interreligious partnership was born… I was reminded of the words of Hindu American Foundation’s Director of Education and Curriculum Reform, Murali Balaji: All of our communities do have shared histories — some good and some not-so-good — and can draw upon those past experiences as lessons to inform greater cooperation with each other. And this is especially true at Diwali, a time for sharing stories, dispelling ignorance and lighting the lamp of new beginnings. 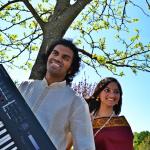 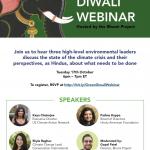