Why Mike Pence Terrifies Me 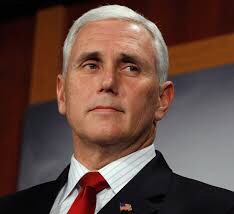 I hesitate to post this blog simply because it is political….and I hate politics. But I have to speak my mind here, knowing full well that I may risk offending a lot of my dear friends. I have many friends on the right and left side of the political spectrum. That is a side effect of living near the center, as I do.

In the interest of full disclosure, I am no fan of Hillary Clinton. I just don’t trust her and I don’t think I ever will. That said, I am in a state of disbelief that the Republican candidate is Donald Trump. The fact that there are so many intelligent people that I know who are actually going to vote for Trump is a clear indication that we have come to a very scary crossroads in our nation’s history. A lot of very fine Americans are completely fed up with the status quo offerings from Washington. I understand that. But I don’t even know what to say about Donald Trump. I still can’t believe that he is going to be a viable candidate for president. As a history teacher, I can’t fathom a day where Trump’s portrait might be alongside those of Washington, Adams, Jefferson, Roosevelt, and Lincoln in the history books. I don’t feel qualified to write about him because…well, just because. But I do know something about his newly chosen running mate, and that is where I will focus my thoughts for this essay. Frankly, I feel the need to expose Mike Pence for what he has done with public education in my state.

Again, in the interest of full disclosure, I am an Indiana citizen and, by trade, a teacher. That job title automatically gives me a bad name among many Hoosiers on the far right. I understand and accept that. It’s just the way it is. Many on the far right around these parts see that I am a teacher and automatically label me a lefty. That is simply not accurate. I am a dyed in the wool centrist. There are several issues about which I agree with the right. There are several issues about which I agree with the left. It is endlessly frustrating for me when it comes time to vote. However, when it comes down to the issue where my bread is buttered, as it were, Mike Pence and I could not be further apart. In my opinion, and in the opinion of most other educators I know, Mike Pence has been a detriment to education. Since education is among the most important issues to me, as it should be to you, I feel compelled to lay out the reasons why I can’t support any ticket with which Mike Pence is associated.

This goes back to the previous Indiana governor, Mitch Daniels. His education plan was hostile to public education. It was very transparent, to all who would see, that Daniels was no friend to public education. He implemented a plan that, by its nature, pits high income schools against low income schools and judges them based on an A to F grading scale. These grades are given on the basis of scores on a highly specious standardized test, which requires all students to “clear the same bar” regardless of their starting point. This has resulted in a predictable gap in achievement where the affluent school districts tend to “out perform” the high poverty districts. As a result of the Daniels program, the lower performing districts get less funding than the higher performing districts. This, coupled with the voucher system, which allows people to take advantage of government assistance to move their students from one district to another, or to a state sponsored “charter school”, results in widening the gap between the haves and the have nots even further than before. The voucher system sounds great to many people (perhaps to you, too), but in reality, it only exacerbates the achievement gap. For the most part, only those families who can afford transportation to other schools take advantage of it. This creates a situation where some of the better students in “under performing” districts move out to other districts or to charter schools. Of course, this often results in lower test scores in the schools those students vacated. That means no pay raises for teachers in those schools. That eventually leads to teachers leaving the profession, which leads to teacher shortages. We are beginning to deal with this problem now, big time! We need the best and brightest teachers to be attracted to the students who need them most, not driven away. Another problem with vouchers that most outside education don’t understand is that, sometimes, you can’t just pick and choose any school to which you want to sent your child. School districts can, and do, close enrollment. Don’t think for a moment that this is done equitably. I will just say this…if the most affluent school districts in the state (you know who I am talking about) suddenly were overrun with voucher applicants from Indianapolis Public Schools (or numerous other urban districts around the state) who have had a history of low academic achievement or high risk behaviors, you can bet that the voucher system would go away quickly!

In 2012, the same year Mike Pence was elected as Governor, many thousands of Indiana educators began a grass roots campaign to remove Governor Daniels’ buddy, the Superintendent of Public Education, Tony Bennett, from office. Incredibly, the effort was successful and a previously unknown educator and librarian, named Glenda Ritz, was elected as the new Superintendent of Public Education. The ousted Bennett went on to be named to a similar position under Governor Jeb Bush in Florida. While in that position, it was learned that Bennett, while in his previous position in Indiana, with Daniels support, had been guilty of corruption when he illegally helped one of his pet charter schools, Chrystal House, by changing the grade for the school when it did not perform as well as he would have liked.

Mitch Daniels went on to become president of Purdue University. Shortly thereafter, it was revealed through leaked emails that he had attempted to ban books by famed historian, Howard Zinn, from public schools in Indiana. Why, you may ask, did he object to Zinn? Because Zinn dared view history through the perspective of the defeated. That’s right, Mitch Daniels was trying to deny Indiana students the opportunity to view history from multiple perspectives. That, in my book, is despicable!

Mike Pence entered the office vacated by Daniels on the heels of the shocking victory achieved by Glenda Ritz. He had an opportunity to step back and assess the clear message from the voters that we were not happy with the direction public education had taken. Instead of honoring the will of the voters of Indiana who, by the way, amazingly, gave Ritz more votes as a Superintendent of Public Education (normally an office that is an afterthought and doesn’t garner a lot of voters’ attention) than Pence got in his victory as state governor, Pence immediately began to look for ways to undermine the power of Ritz’s office. Pence, a champion of “small government”, formed an entirely new state board of education!  That’s right, he created a second board of education, thumbing his nose at the will of the electorate and effectively stripping Glenda Ritz of much of her power! This actually happened in in my state, Indiana…AMERICA!

He then went on to further attempt to abuse the democratic spirit by trying to start a state controlled media outlet!  That’s right, Mike Pence not only created a new government agency to try to circumvent the will of the electorate, he then tried to control the story by creating a state-run news agency! This happened in Indiana…In America!

Governor Pence loves to cite the statistic that, under his leadership, Indiana has a budget surplus, a large “rainy day fund.” Yet, many school districts across the state have been forced to beg their communities for financial help through local tax referendums just to stay afloat. Districts have slashed budgets to the bone. Class sizes are way up and many things beneficial to students, like extra-curricular activities and field trip opportunities are way down. How can Pence claim a surplus when so many school districts are suffering financially?

Pence is infamous for other things that got more negative press for Indiana that I won’t even go into here. You will, no doubt, read plenty about those things in the national press in the coming weeks if you aren’t already familiar with them. But I wanted to shine a light on the things that don’t get mentioned as much. These are the things that, as an educator, first made me terrified of Mike Pence.

July 18, 2016 The Muted Cacophony, America's Empathy Problem
Recent Comments
66 Comments | Leave a Comment
Browse Our Archives
get the latest from
Empathy Mining
Sign up for our newsletter
POPULAR AT PATHEOS Politics Blue
1