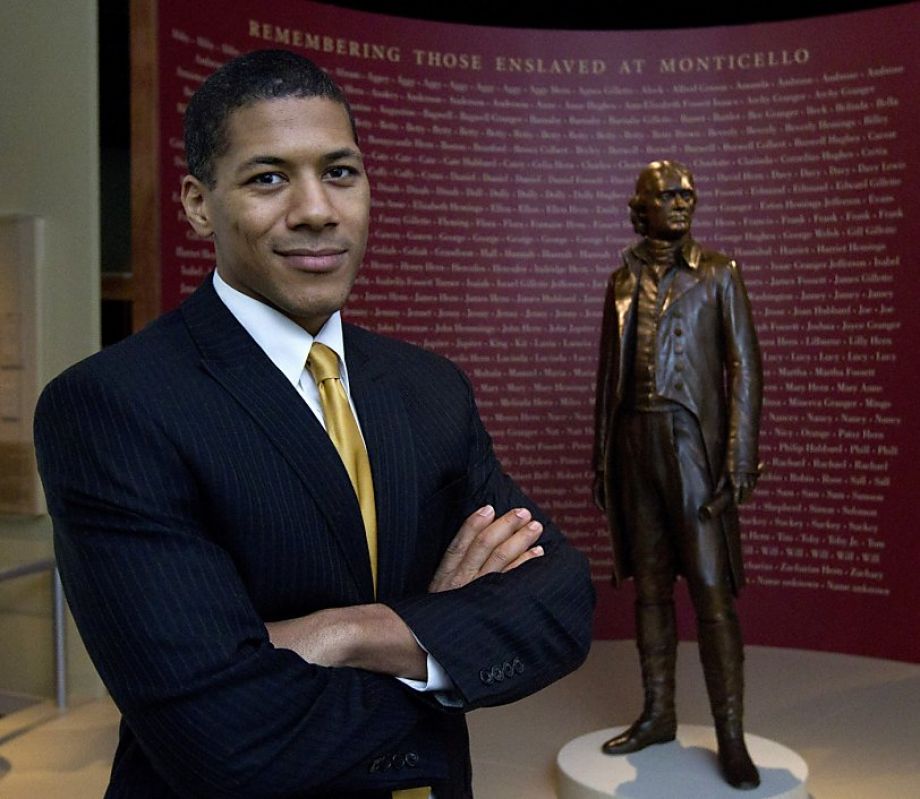 The Martin Luther King Jr. holiday is upon us and Black History Month is right around the corner. It’s a fitting time to take a look at America’s sorted and complex racial history. For my money, there is no better place to start than with one of our most beloved and misunderstood founders, Thomas Jefferson.

The photograph above shows a journalist named Shannon Lanier. He is standing in front of a statue of Thomas Jefferson. There is a lot going on in this picture. I will come back to it at the end. For now, let’s dig into the man who has perplexed me since I was a teenager, Thomas Jefferson.

One summer, when I was 13 or 14 years old, my family made a massive trip up the east coast of America. We went to a lot of historic places and the experience left a lasting mark upon my love of history. No place had a greater impact than Thomas Jefferson’s home, Monticello. I was completely engrossed in the Jefferson I met that day. It was clear, even to a teenager, that the man who designed that wonderful home had a lot of different levels to him. It was plain to see in the way that he designed his home that he was aware of his own inconsistencies and did what he could to shade them from the light of day wherever he could do so.

Jefferson was a man who was, in many ways, ahead of his times. Yet, he was also a product of his times. The most glaring example of paradox within Jefferson was the obvious one of his complex relationship with slavery. Here is the man who wrote the words our nation is based upon. Those wonderful words, “we hold these truths to be self evident, that ALL men are created equal.” Even as he penned that immortal phrase, there were hundreds of men, women, and children toiling in bondage at Monticello. Jefferson was on record many times railing against the evils of slavery. Yet, over his lifetime, he owned more than 600 human beings and he freed exactly 7 of them. That is a pretty big paradox.

There are other examples. Jefferson was the foundation of one of the first two political parties, the anti-federalist Democratic-Republicans. He was staunchly in favor of a very limited federal government, preferring more power be given to the states. With regard to the Constitution, he considered himself a strict constructionist. He did not see wiggle room in the Constitution. He believed a president had only those powers specifically spelled out in the Constitution and nothing more. Yet, Jefferson went against his own doctrine by making one of the greatest big government plays of all time when he signed the Louisiana Purchase, thus doubling the size of the nation with the stroke of his quill. He did so believing that he did not have the Constitutional authority. That’s another pretty big paradox.

Finally, Jefferson’s vision to end slavery did not end with freed slaves staying in America. He was in favor of repatriation and colonization of freed slaves. In other words, he did not think that a bi-racial America could work. He believed that freed slaves would have to be sent somewhere else for America to live in harmony.

Now let’s go back to that picture at the top of this page. In the photo, Shannon Lanier is standing before a statue of Jefferson. Behind Jefferson is a huge list containing the first names of the more than 600 human beings he owned during his life. Shannon Lanier embodies the paradox of Jefferson.

For years it was rumored (even during Jefferson’s lifetime) that he had an ongoing affair with one of his slaves named Sally Hemings. For more than 150 years this story was a taboo subject of controversy, often swept under the rug of history. In 1998, Shannon Lanier blew the story out of the water when his DNA was shown to be a match to the Jefferson and Hemings line. Modern science had shined a spotlight so directly upon the paradox that there could be no more sweeping it under the rug. It was eventually found that Jefferson likely fathered at least 6 children with Sally Hemings. Since 1998 there have regularly been Jefferson/Hemings family reunions held on the grounds at Monticello. Here is a picture of one such gathering. 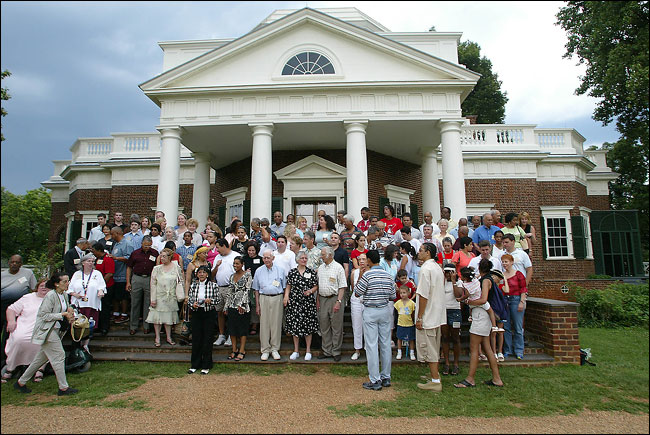 The man who could not envision a bi-racial America actually helped create one right on his own plantation. I often wonder what Jefferson would say if he came back to see a reunion of the bi-racial family he created?

Isn’t that the ultimate paradox of Thomas Jefferson?

When you really stop and think about it…ain’t that America?

January 10, 2018
Let Us Turn Our Thoughts Today to Martin Luther King
Next Post