Defending My Politics with My Faith Series: Part 1-The Economy

Defending My Politics with My Faith Series: Part 1-The Economy February 12, 2021 Shane Phipps 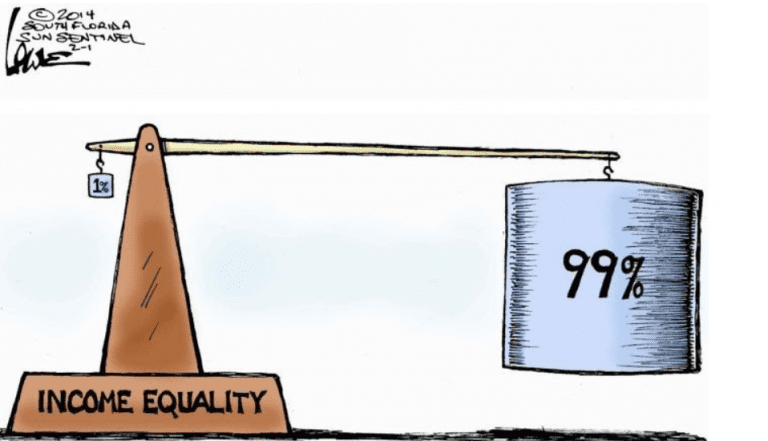 I made a New Year’s resolution of sorts to help restore peace and civility in what small way I can through my writing. The past year, I fell victim too often to writing in an attacking and judgmental tone as I admonished more conservative Christians for their support of our former president. As a consequence, I fear that I was guilty of several things:

So I took a break to reflect and came out the other side with a new president and a new goal. I’m going to try to stay positive. With that in mind, I am going to start a series called, Defending My Politics with Faith. Each article in this series will focus on a different issue that people consider when voting. I will go out of my way not to judge anyone else but to express as best I can how I make my political choices using my understanding of my Christian principles.

I will focus on the economy for my first piece in this series.

I have come to firmly believe that our nation’s number one problem is income inequality. This is not to undersell the other problems. Rather, it is my sincere opinion that most of our other problems, including racism, stem from income inequality. Income inequality is almost unfathomably large and growing exponentially by the day. Among the world’s most developed countries, the United States has the largest gap between the haves and have nots by a significant margin and the gap between the richest and poorest families in the nation has more than doubled in the last 30 years. To put the finest of fine points on this, the wealthiest three individuals in the United States now control more wealth than the poorest half of our population. The wealth of 3 is greater than the wealth of over 60 million. As many times as I read that, I still can’t fully comprehend it.

I’m not a Christian who subscribes to the Trickle-Down Economics theory. I think the paragraph above does a more than adequate job of showing that trickle down doesn’t do much trickling. I’m also not an anti-capitalist, per se. I believe that the people who have the most unique skills, take the most risks, and have the most responsibility deserve more money. But there has got to be a line somewhere. According to the Economic Policy Institute, CEO pay has grown by 940% in the last 50 years while the average worker pay has only risen by 12%. That is a jaw-dropping statistic by any measure. That averages out to a ratio of CEO pay to average worker pay of 320:1. So, if an average worker makes $1,000 per week, the CEO makes $320,000 per week. I can’t see how any of this jives with anything I read in my bible about wealth.

I wrote a poem recently about how greed always topples utopias. Greed is squarely at the center of our income inequality problem—and therefore at the root of our other problems, such as racism. The Bible plainly warns against greed and income inequality. Start connecting the dots and you will begin to see a picture of what our real problem is here in America.

Let’s take a quick look at what the Bible has to say about wealth and inequality.

“Beware and be on your guard against every form of greed; for not even when one has an abundance does his life consist of his possessions.” Luke 12:15

“He who oppresses the poor to make more money for himself, or gives to the rich, will only come to poverty.” Proverbs 22:16

“For the love of money is a root of all sorts of evil, and some, by longing for it, have wandered away from the faith and pierced themselves with many griefs.” 1 Timothy 6:10

“No one can serve two masters, for either he will hate the one and love the other, or he will be devoted to the one and despise the other. You cannot serve God and money.” Matthew 6:24

“Again I tell you, it is easier for a camel to go through the eye of a needle than for someone who is rich to enter the kingdom of God.” Matthew 19:24

When I vote, I keep this belief system near the front of my mind. I vote for policies that are meant to help decrease the wealth inequality in our country.

I do it not because I hate capitalism, but because I think it is my duty as a Christian to vote this way.

February 15, 2021 Defending My Politics with My Faith: Part 2 Racial Issues
Recent Comments
0 | Leave a Comment
Browse Our Archives
get the latest from
Empathy Mining
Sign up for our newsletter
POPULAR AT PATHEOS Politics Blue
1