Someone to Look Down On 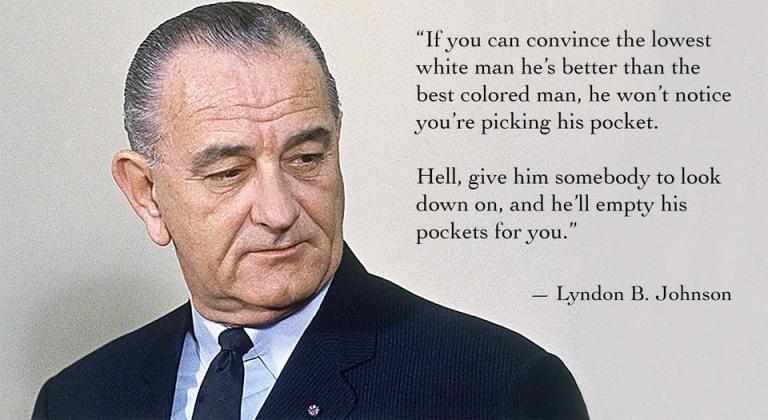 That quote in the image up there is one of my favorites of all time. President Johnson encapsulted America’s biggest problem so succinctly that they should have been the last words ever spoken on the subjects of income inequality and racism. But they weren’t. Half a century later we are still caught up in the same mess. We haven’t really learned anything, and I’m really getting tired of it.

The thing that sickens me the most is reading the things my more conservative Christian friends are posting right now about the Coronavirus pandemic and our federal government’s response to it. Many of them seem to believe that the whole thing is either a hoax cooked up by the Left in order to cripple the economy to weaken President Trump’s chances at reelection, or that it was a diabolical bio-terrorist plot concocted by China to get back at America for Trump having the guts to “finally stand up to them.” Once again, the President has been actively fanning the flames of racism among his base by referring to the virus as the “China Virus” or the “Kung Flu.” Chinese Americans are now living in fear as some have been assaulted by people simply because of their race. Such petulant behavior from an American president will leave an ugly stain on our history that will never come clean. Yet, his conservative Christian followers eat it up. Trump continually gives them someone to look down on and that’s all they need to feed them.

Now I see my Right Wing Christian friends sharing false news stories about Nancy Pelosi and the Dems, holding up the bailout legislation by sticking pork in it that would fund abortion. I’ve tried to provide links to unbiased fact checking articles that show the claim is false, but they won’t hear of it. They’ve got someone to look down on and they won’t let anyone take that away from them.

When presented with the truth  that what’s actually been holding up bailout bill is the fact that the GOP wants the treasury department to have complete autonomy to dole out relief money to mega-corporations as it sees fit, my conservative Christian friends won’t listen. They aren’t even bothered by the fact that when asked about who will have the power to decide where the bailout money goes, President Trump replied, “look, I’ll be the oversight. I’ll be the oversight.” They won’t worry about that because Trump has, from day one of his presidency, been steadily providing them with a long list of people to look down on. That keeps them too busy to look up and see where the real enemy is.

I also see many of my conservative Christian friends are posting messages that tease their progressive friends and neighbors about the proposed $1,000 stimulous checks that the government is supposedly going to be sending out to citizens. They say things like, “well ‘Demoncrats’, I expect you’ll be tearing up your relief checks since they’ll be coming from President Trump.” The whole time they are laughing it up about that, they completely miss the irony in the situation. There is apparently nothing in the world more abhorrent to them than socialism unless, it would seem, that it’s being doled out by their guy.

Lost in all of this petty squabbling is the fact that these are the times we most need to be coming together. The economic disaster that is in front of us is going to require us all to realize that we desperately need one another. Now is certainly not the time for selfishness and greed. Now is not the time for every man/woman for themselves, now is the time for all for one and one for all. We are simply not going to be able to put things back together by going back to the status quo. This crisis actually could provide an opportunity to make some long overdue changes and get this country back on the right track. It’s going to take an FDR kind of president; a brand new New Deal.  When this health crisis finally subsides, we will have an opportunity to build something new. A lot of people are going to need to find work. The state of our nation’s infrastructure–among other things–is a nightmare. The last time we were in such dire straights was in the 1930s. Look at all that got accomplished in those years under the New Deal programs like the Civilian Conservation Corps (C.C.C.), the Works Progress Administration (W.P.A.), the Tennessee Valley Authority (T.V.A.), and many more. It is impossible to imagine this nation today without the incredible accomplishments of those social programs. It’s time to bring that kind of government back. We have a chance to put people to work fixing roads and bridges, expanding our renewable energy programs, creating a much needed high-speed light rail system, and countless other enormous projects. What an opportunity. But many of the people I know would fight to the death against such a change. They’d scream about socialism and demand that priviatized labor is the only way to go. The private sector never would have gotten us out of the Great Depression and I have no confidence that it can get us out of our current mess.

It both amuses and saddens me when I realize that the America that so many of my Right Wing Christian friends seeem to want to get back to–the Greatest Generation–the WWII era when America was perhaps at her most powerful, was a direct result, and only possible because of the era just before it when our nation was chock full of sweeping social programs. During the Great Depression Era, the average American didn’t have a heck of a lot of people to look down on because most of them were at the bottom together. It’s hard to look down on someone when ciricumstance force you to work shoulder-to-shoulder with them in order to rebuild your nation.

I’m afraid too many Americans today are terrified of not having someone to look down on. That’s why they go around blustering about everything they’ve worked so hard to earn and blast away at anyone who suggests that the poor, disenfranchised, and marginalized might need some extra help. Too many people think that equality is the ultimate goal. We don’t need equality, we need equity. I love the illustration below. The image on the left shows equality. All three individuals received an identical box to help them see over the fence to watch the ballgame. However, the taller man didn’t need a box at all. The little girl would not have been able to see the game without the box, but even with the one box, she can barely see over the fence. The box did the little boy in the wheel chair absolutely no good. The image on the right shows equity. The tall man doesnt get a box, the little girl gets two boxes, and the boy in the wheel chair gets an platform with a ramp. 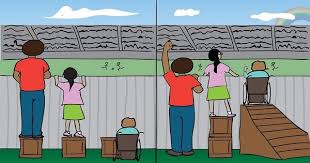 Too many Americans prefer equality over equity because equality leaves you with plenty of people to look down on. Equity puts everyone on the same level. Does that sound frightening to you? If you answer yes, I’d really love it if you’d spend some time in deep and prayerful thought and ask yourself why that is.

I’ll close by sharing this song I wrote which led me to write this article.

March 17, 2020
Five Important Lessons a Pandemic Can Teach Us About Ourselves
Next Post 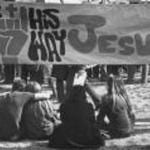 We Could All Be Better at...
Empathy Mining