Five Important Lessons a Pandemic Can Teach Us About Ourselves

Despite all the damage we have tried to inflict upon ourselves over the course of human history, we can’t hold a candle to the destructive strength of microscopic organisms. We’ve tried to kill ourselves off in many devastating wars. We’ve had inquisitions where we have rounded up and killed thousands of people who didn’t see fit to worship in the same manner as us. We’ve been caught up in the mass hysteria of witch hunts. We have seen genocides which have killed millions of people, including here in America. We still murder one another at alarming rates. We still allow people to go without enough food. People all over the world, and even in America, still live without a reliable source of clean drinking water (I still remember you, Flint, Michigan). We still build walls to try to keep out families seeking refuge from war-torn parts of the world. Yes, we are pretty good at hurting and killing one another. But all of our historic efforts to do our species in combined can’t approach the skill of bacteria and viruses. Even in our most deadly wars, it has been disease and infection caused by microscopic organisms that claimed far more casualties than bullets, bombs, and bayonets. These unseen grim reapers have been our worst enemies ever since the beginning. And, when the final story is written, it is likely they which will one day bring about our ultimate end.

For your consideration, here is a list of the ten most deadly pandemics in recorded history (in chronological order). The numbers are staggering…

In just those ten isolated events, germs managed to kill, at minimum, well over 250 million people. It’s sobering and humbling to realize that an enemy we can’t even see is the biggest threat to our existence.

We now find ourselves in the very early stages of a new pandemic. Covid-19 is on the loose and has effectively brought the world to a virutal stand still. Most of us are spending much of our time in the isolation of quarantine as we await the outcome of all of this. The numbers are not yet known, but it is an absolute certainty that there are far more people infected than we can possibly know at this point. So we sit and we wait and we think.

Here is what I’ve been thinking; despite the scary nature of the unknown in this pandemic scenario, there are important and sometimes even beautiful lessons to be learned from it. I have identified five things that we should learn from this.

It’s built right into the word pandemic itself. The prefix “pan” means “involving all.” There is both fear and beauty in that truth. It is a frightening thing to realize that germs which cause pandemics are completely indiscriminate in nature. They prey upon the young and old, the rich and poor, men and women, and people from all races, creeds, religions, and persuasions. When it comes to germs, they don’t care who you are or where you’re from. Germs don’t respect borders and they don’t play favorites. They are the great equilizers. That might scare you, but if you look a little deeper, you might find comfort in it, too. It should be a lesson that most of the “differences” we place on one another are constructed from our own biases. When push comes to shove, we are all born naked and helpless, we all bleed red, and we all are equally vulnerable to death. Everthing in between is a man-made construct.

2. The biggest thing we have to fear is human greed

I made a joke on social media the other day that there has never been a better time to invest in toilet paper memes. If you’ve been on social media at all recently, you’ve no doubt seen dozens of memes being shared about the toilet paper shortage. Some of them are quite funny. We all need a good laugh in times like these, but below the humor is a very scary reality. We are greedy creatures. The fact is, the Coronavirus illness doesn’t cause diarrhea or disentery, it’s a resperatory disease. Yet, people are grabbing far more than their fair share of toilet paper, which ends up causing many people to have to search far and wide to find any for themselves. To borrow a line from Seinfeld, we are a nation that just “can’t spare a square.” And then, of course, there are others who never let a good crisis go to waste, so they go out and buy up all the disinfectant cleaners, hand sanitizer products and such and then sell them for a profit. Price gouging always rears its ugly head in times like these. But here’s the thing; there seems to be a bipartisan distaste for the kind of people who hoard important supplies in a time of crisis. I see friends from both extremes of the political divide speaking out against this madness. Yet, some of those people who are upset about the pandemic hoarders are the very same people who seem to have no problem whatsoever about our always-present income inequality in America. We live in a country where our top three richest individuals have hoarded more wealth than the bottom 165 million individuals. Yet, if you dare to point that out, many will call you a socialist. Greed seems only to bother people when they are directly affected by it.

3. People still fall victim to being manipulated by religion

Most Christians and most churches are doing the right things in the face of this pandemic. Most are practicing social distancing. Most are canceling services and events. I’ve seen many churches which are live streaming their services so that people can stay home but still worship. All of that is good. And then, there are the “others.” We have televangelists saying that they are selling the cure for the Coronavirus or offering healing over the air. We also have some churches which are being defiant in the face of the pandemic. This social media post came from a church in my own state last week: 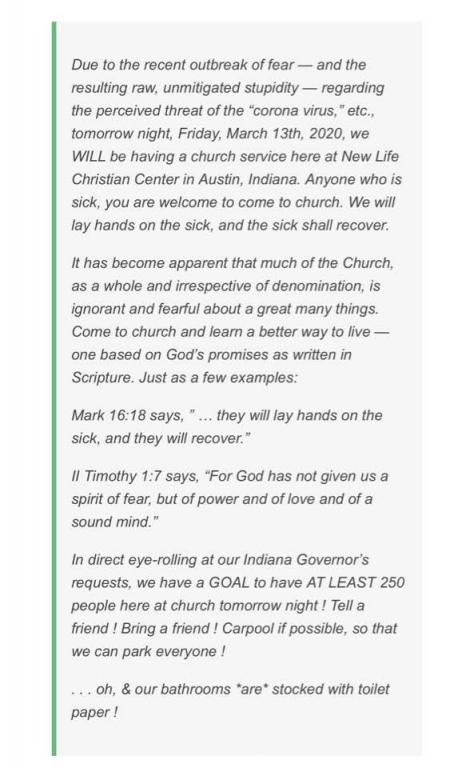 That kind of idiotic and irresponsible rhetoric is self-serving and dangerous. It’s one thing to claim God’s power to heal, it’s quite another to flaunt good sense and manipulate people in God’s name.

4. The economic fall out will tell a lot about us

As I stated earlier, pandemic-causing germs are the great equalizers. This is true for economics, too. The stock markets have been plummeting. Yesterday saw the largest single day plunge in history, bigger even than the crash of 1929. That will hurt us all, to be sure, but the people who stand to lose the most are the ones who have the most. There are people I know who have seen their stock portfolios lose millions in just the past couple weeks. It’s likely to get much worse before it gets any better. With the closures of restaurants and bars along with the cancelations of concert tours and professional sports leagues and such, there are millions of people wondering where their next paycheck will come. It could very well be that the only way out of the financial mess might need to look a little bit like socialism. We have already established that people can’t be trusted to be generous in situations like this. So what’s it going to be? Are we going to be every man, woman, and child for themselves or are we going to be all for one and one for all?

5. We need each other

I said all that to get to this; in the end, we need each other. We live in an interdependant world whether we want to admit it or not. That is never more clear than in a crisis like a pandemic. We are at the mercy of the actions of others. We have to trust that we will all try to do the right thing for the most part. We need each other to help keep us from getting sick and, when we do get sick, we need each other to help get well. My wife runs a microbiology laboratory in a regional hospital. Instead of holing herself up in quarantine like me, she runs into the breach to do battle on the frontlines of the war against this pandemic. She and millions like her have given up their vacation time and their ability to hide from danger. They go into battle knowing that they are at a much higher risk of exposure than the rest of us. They put themselves in harm’s way for the greater good. They give me hope that we haven’t lost our ability to care about others.

Let’s learn the lessons offered from the Covid-19 Pandemic and come out on the other side as better people.

March 13, 2020
The Age of Trump has Prepared Us Well for Social Distancing
Next Post 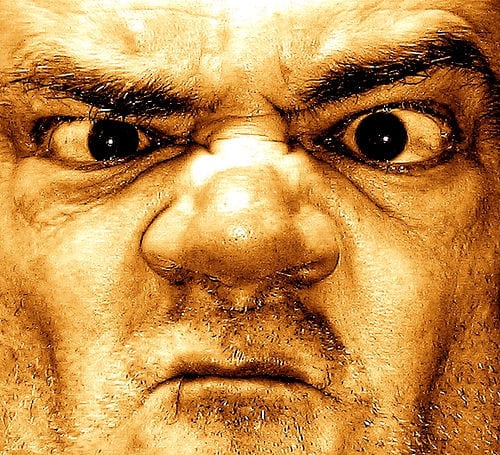 Politics Blue
We are a nation of cannibals: What changed?
Empathy Mining
TRENDING AT PATHEOS Politics Blue