Enough With All the Exercises: Why Variety Isn’t Better Than Repetition

Enough With All the Exercises: Why Variety Isn’t Better Than Repetition February 3, 2016 Asa West

Note: this post is written from a Reclaiming perspective. Your experience will be different depending on your tradition.

I love reading, and I love practicing witchcraft, so obviously I love reading books about witchcraft. But long ago I noticed something interesting: while books on other traditions, like Judaism, can grapple with meaty theological questions for hundreds of pages, books by witches tend to be light on theology. Instead, our books are filled with exercises.

In The Spiral Dance, for example, there are 61 exercises listed in the table of contents–and those don’t include the invocations or spells. T. Thorn Coyle’s Evolutionary Witchcraft doesn’t list its exercises, but it looks like there are about 12 per chapter. All these exercises run the gamut from healing rituals to creative visualizations to devotional dances to trance journeys. Now, The Spiral Dance and Evolutionary Witchcraft are two of my favorite books on witchcraft, both filled with immense wisdom and insight, but they–and others–left me with exercise fatigue long ago. I looked at a copy of The Earth Path a few years ago, but when I saw the extensive list of exercises, I put it back on the shelf. I felt gauche admitting it, but I wanted to enjoy some fantastic writing and grapple with incisive ideas, not do more exercises. Although the book is still on my to-read list, I’ve never felt the urge to pick it up.

Now, I’m not saying a wealth of exercises is a flaw, exactly. These exercises are no doubt immensely useful for a lot of people. More importantly, I think that they point to the experiential nature of witchcraft. The Abrahamic religions focus on studying texts as much as–perhaps even more than–performing rituals; witchcraft, on the other hand, centers on raising power and cultivating altered states. A Jew can devote the bulk of her spiritual life to reading and be a excellent Jew, but I don’t see how someone could practice witchcraft primarily through text study. Buddhism is very similar in this regard: I forget where, but I once read an anecdote about a Buddhist priest meeting with the leader of a British Buddhist society. The British Buddhist assured the priest that although she’d never meditated, she was well versed in all the sutras; the priest, aghast, responded that the sutras were the dregs left over from the real practices. It’s been said countless times that you can’t learn witchcraft just by reading a book, and it’s true.

Except…Buddhism still seems to produce much deeper theology and many more sacred texts than witchcraft, even adjusting for its age. The Sutras, the Dhammapada, the countless dharma talks and wealth of modern commentary. I’m not saying that a religion needs texts in order to be meaningful, but almost every witch I know likes to read, so the contrast is striking. How can Buddhists produce breathtaking poetry and penetrating insight while witches can’t seem to write three pages without throwing in an exercise?

Like I said, I don’t doubt that exercises do a lot of people a lot of good. But at the same time, I wonder if, at a certain point, all our myriad exercises become hindrances to spiritual development instead of aids.

A few weeks ago, I was talking about this with my husband and I had a realization: the main difference between my Buddhist practice and my witchcraft is the simplicity of the former. Vipassana (mindfulness) meditation developed 2,500 years ago, and its core essence hasn’t changed. You focus your attention on your physical experience. That’s it. No extensive visualizations, nothing involving salt water or candles, no running energy from here to there. You just focus on your physical experience. Over and over again. Every day. For as long as you call yourself a Buddhist. This practice changes lives.

Why? Because like physical exercise, you only get the real benefits of a spiritual exercise after many repetitions. The first time you try mindfulness meditation, you’ll be fidgety and uncomfortable and you won’t be able to concentrate at all and when the final chime sounds you’ll be equal parts frustrated and relieved that it’s over. This might continue for your next several sessions, or even longer. But eventually, you’ll find that you can concentrate on your breath for a couple of seconds before your mind wanders again. And maybe, if you practice long and diligently enough, you’ll even feel the sudden sense of peace and expansiveness that you’ve heard so much about. (I haven’t yet, but I remain hopeful!) It won’t happen, though, unless you do that one exercise over and over and over again. It won’t happen unless you’re open to the possibility of doing it over and over again for the rest of your life.

However, when books offer you lots of exercises to choose from–or worse, imply that you should do every single one of them–you run the risk of being pulled in a thousand directions.* Should I do the healing ritual tonight, or the Pentacle of Pearl? Maybe the fire visualization? Or the trance journey with Macha? Should I try to knock out two or three before I go to bed?

To be sure, there are lots of exercises that are just meant to be done once, to introduce you to a concept or entity–say, meditations on the elements if you’ve never invoked them before. And there’s nothing wrong with that. But even if an exercise feels like it’s accomplished its goal in one session, how do you know what insights you might have received after a hundred or even a thousand repetitions? How do you know that what feels like a major change in your psyche will actually stick?

So, while exercises aren’t a problem in themselves, what is a problem is our aversion to repetition, to continuing with a practice after the honeymoon stage has ended.

This aversion extends to major rituals, like sabbats. Creating new rituals from scratch can facilitate big magic, to be sure. But I often see, among priestesses and ritual facilitators, a strong pressure to avoid “recycling” invocations or elements of previous rituals. I feel it myself, too. Will participants be disappointed, I worry, if we invoke the same deities this solstice as we did a year ago–even though it feels right to do so? Will participants be bored if I don’t compose a completely new water invocation?

But the repetition of a good ritual, letting new layers reveal themselves over months or years or a lifetime, can be deeply meaningful. Take, for example, Brigid–a sabbat on which many Reclaiming communities perform the same ritual every year, instead of coming up with something completely new. Phoenix and Gwion have a lovely description of the North Bay Reclaiming ritual, particularly participants’ yearly pledges, at The Witches Next Door:

The pledge is difficult to explain, because it is so personal and if often a spur of the moment decision. If called, folks make a pledge – to Brigid, to themselves, to their guides, their gods, to their partners, it really varies – The pledge might be a promise or a spell, a reminder of how they want to be in the world for this turning of the Wheel of the year.

For the two of us, outside of initiatory oaths and our personal vows to each other, these pledges are the most deeply personal and magical spells we do all year.

We also make annual pledges down here in Reclaiming LA, and I’ve found that my pledges have grown more and more personal and powerful each year. In a sense, making a pledge is like learning to drum–the more you practice, the better you get at it! Just as Vipassana reveals its benefits over many repetitions, you might have to make pledges for several years before you learn just how deeply the ritual can change you. The ring of the hammer on Brigid’s forge reminds me of the shofar blast signaling the end of Yom Kippur, when we Jews finish our atonement and break our fasts. No Jew would ever suggest that we avoid blowing the shofar because “we did that last year.” The repetition of that ritual, and the knowledge that your co-religionists around the world are all doing it as the sun sets in their respective time zones, is part of what gives it its power.

I’m not saying that exercises are bad, or that authors should stop writing them, or that you should never do an exercise fewer than a thousand times, or that a sabbat should be exactly the same each year. (You can play with, remix, and adapt ritual elements while retaining the essence of the sabbat.) As always, let me stress that you should do what works for you.

My only point is this: I’d hate to see countless discrete exercises take precedence over deeply developed core practices. When you find yourself growing restless and wanting to move on to the next interesting-looking daily trance or ritual, it’s worth pushing through that restlessness to see if you can drop to a deeper level in your practice. If witchcraft as a religion survives for a few thousand years, what will it look like to our descendants? What rituals and meditations and prayers will persist through time, growing and gaining power as generation after generation repeats and refines them? What commentary and poetry and myths and sacred texts will accompany our rituals and prayers?

When we open up the latest book filled with all the latest exercises, is it worth trying the ones that call to us? Sure! But it’s also worth asking ourselves: what practices are the most precious to us, the most vital–as both individuals and communities? What practices define our spiritual life? We need to show those prayers and rituals the respect they deserve, by stewarding them and nourishing them and giving them our full and open hearts.

* Indeed, in the midst of all the exercises in The Spiral Dance, Starhawk herself warns us against taking on too many, ruefully describing how at one point she did so many meditations each day that she “had very little time left for actually living” (78). 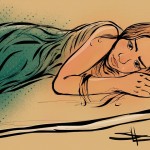 January 28, 2016
Priestessing Depression: Why are Pagans So Afraid of Negative Emotions?
Next Post

February 8, 2016 So, About this CDC Recommendation for Women...
Recent Comments
0 | Leave a Comment
"hi everyone-- happy to share that the deck is now available! 150 decks were printed ..."
Ori A New Queer Jewitch Tarot Deck: ..."
"To read your article was such a relief, just to see that I'm not alone ..."
littleforestwitch Don’t Listen to Your Gut: Practicing ..."
"I still can't find the like button on articles so here have a <3"
Critter (they) Priestessing Depression: Why are Pagans So ..."
"This is very beautiful! I haven't been to Iceland yet, but have always felt drawn ..."
Trellia A Witch in Iceland (Part 1: ..."
Browse Our Archives
get the latest from
Pagan
Sign up for our newsletter
POPULAR AT PATHEOS Pagan
1