A Witch in Iceland (Part 1: Water)

Last week, I attended a conference in Reykjavik for my job, and my husband and I were able to see some of the country. I’m not a travel writer, but this series is an effort at sorting through the thoughts I have about the wonderful things I saw (and not-so-wonderful things that happened during the trip).

About a month ago, I had to cut my hair off; it had gotten severely damaged and the ends had been breaking steadily for at least a year. By the time I cut it, most of the curls had frayed into thin, scraggly frizz. My hair has always been pretty brittle, and the store had stopped selling the leave-in conditioner I liked, and I’m sure aging and hormones had something to do with it, but the main culprit, I suspect, is the water in Los Angeles. It’s so laden with metals that you can’t drink tap water without a filter. If you don’t rinse a glass with soap, then you can see visible deposits on it. I’ve lived in LA for six years now, and although vinegar rinses help get the crap out of my hair, subjecting it to our horrible water supply has taken its toll.

Now I’m sporting short hair, which everyone assures me looks good, and waiting for it to grow out again. I overhauled my entire hair routine to try and prevent it from breaking again. I find myself examining strands in the shower to make sure they have roots attached, that they’re the product of natural shedding and not breakage.

When our plane began its descent into Keflavik, all I could see out the window was a gray pillowy sky and gray choppy water. Down and down we went, the waves getting closer, until a few rocky outcroppings burst into view and seconds later, the wheels hit the ground. The seashore marked our passage from the dim limbo of air travel to the solidity of the earth. The first thing my husband and I did in Iceland was go to a geothermal pool: one of the “hot pots” that contain water heated by vents in the earth. We didn’t go to the Blue Lagoon because we couldn’t get tickets in time, so instead we went to the Laugar Spa adjacent to Laugardalslaug pool on the east side of Reykjavik. The soaks and saunas were nice, but I couldn’t shake my fear that the water was going to wreck my hair. I knew how good Iceland’s water is, of course. But I’d been conditioned, by Los Angeles, to fear water.

After we finished our time in the hot pots, I showered and tended to my hair. I put in my expensive conditioner and made sure to leave some in when I rinsed. Then I put in the new leave-in conditioner I’d gotten after some research on naturallycurly.com, and felt my hair instantly soften. Then the gel—just a little bit, so as not to weigh my hair down. Then, before blowdrying it (I usually avoid that in LA, but in Reykjavik it was 45 degrees out) I carefully twirled each lock around a finger to make ringlets. This is my relationship with my hair—my battered, fragile, maligned Jewish hair. In elementary school the other kids called me Fro, and it took me years to understand just how racist that nickname was. (Because Black hair was so shameful, in their minds, that a white person with hair that could in any way be construed as Black should be shamed as well.) Most of the other people I know with curly hair straighten it. And as much as straight-haired women pine for curls and get perm after perm, natural curls—that is, what actual curly hair actually looks and behaves like—are seen as unruly, bad, something to be hidden and tamed. Carefully tending to my hair that first day in Iceland, after immersing myself in water heated by the earth, felt like a ritual. Which, of course, it was. It always is.

A couple of days later, we went to the secret lagoon in Flúðir. This one was outside and visibly steaming, exactly what I’d expected from the pictures in the guidebook. The temperature varied in different parts of the pool, and more than once I moved into a spot that burned me. I didn’t have my conditioner or gel on me, so when my hair dried, I had a rare glimpse at what it looks like with no product whatsoever. Frizzy, of course, with no ringlets. Very different. But it didn’t look unhealthy.

As the days passed and I gradually relaxed about my hair, I marveled that a place could have such an easy, abundant relationship with water. Coming from a city in its fourth year of drought, where the water is uniformly foul, I had trouble wrapping my mind around the idea. I had to retrain myself to flush the toilet after each use, rather than letting it sit.

Of course I went to see the amazing manifestations of water in Iceland: waterfalls and geysers and glaciers. Geysir, Seljalandsfoss, Gullfoss, Langjokull, Eyjafjallajökull. Of course they were majestic and beautiful and humbling. Of course I took lots of pictures. Interestingly, though, I found it harder to feel the presence of the Divine in the spectacular marvels of nature. Maybe it was all the other tourists around—and the knowledge that I was also a tourist, wearing the same puffy REI jacket and comfortable shoes as everyone else, there to appreciate the wonder for a brief period and then leave. Spirit really doesn’t do well with tight schedules. And there was no possibility of doing any significant magic or prayer when there were people milling all around me; I need privacy and quiet to work deep into ritual.

But maybe it was because I find myself drawn to all the smaller, more ephemeral emanations of Spirit: the new green bud, the hovering honeybee, the soft breeze on my skin. When my husband and I were looking at Seljalandsfoss, a gust of wind abruptly carried a burst of spray right into my face. On one of our hikes, I came across a patch of snow and pushed my fingers into it. I couldn’t remember the last time I’d seen snow. My daughter has never seen it in her life. Those little moments were when I felt like I’d been blessed.

When I think of Icelandic lore, I think primarily of the Huldufólk, or the Hidden People. But there are also some interesting stories about water. 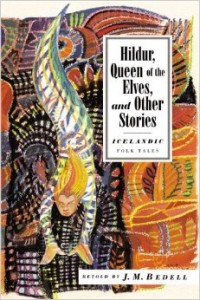 Some of them center on merfolk and what we would call selkies–faeries who come up on land and either come into conflict with humans, or make mischief. In one story, a little girl is spotted by herself on the beach, and people begin to wonder if she might be a mermaid. Almost everyone avoids her, but one young man walks up and grabs her. She quickly grows until she’s massive, snatches the young man, and carries him into the ocean.

What I find most interesting about Icelandic folktales, though, is the presence of animals in other realms. Under the ocean, according to the stories, are cows tended by the merfolk and water horses that will carry you to your death if you try to ride them. All the water tales I read portrayed water as something fierce and mysterious. Thinking about the crashing waterfalls, the waves outside of Keflavik, the spurting geysers, and boiling geothermal pools, I could see why.

On the day we went to Þórsmörk (“Thor’s forest”), I thought a lot about Thor, and how, in a certain way, he could also be considered a water god–if you consider the fact that thunder and storms are manifestations of water. But despite my name, I’m no Asatruar, so I’ll leave that conversation to his devotees (whom I’m assuming are already having them).

Next in this series: Earth, including Þingvellir, Þórsmörk, hollow hills and the Huldufólk, and lots and lots of yarn!

June 11, 2016 A Witch in Iceland (Part 2: Earth)
Recent Comments
0 | Leave a Comment
"hi everyone-- happy to share that the deck is now available! 150 decks were printed ..."
Ori A New Queer Jewitch Tarot Deck: ..."
"To read your article was such a relief, just to see that I'm not alone ..."
littleforestwitch Don’t Listen to Your Gut: Practicing ..."
"I still can't find the like button on articles so here have a <3"
Critter (they) Priestessing Depression: Why are Pagans So ..."
"This is very beautiful! I haven't been to Iceland yet, but have always felt drawn ..."
Trellia (she/her) A Witch in Iceland (Part 1: ..."
Browse Our Archives
Related posts from Shekhinah Calling

Pagan
"Just Let Me Label You So We Can...
Shekhinah Calling