But a Samaritan traveler who came upon him
was moved with compassion at the sight.
He approached the victim,
poured oil and wine over his wounds and bandaged them.
Then he lifted him up on his own animal,
took him to an inn, and cared for him.

“I relate to Jesus kind of like he’s my brother.”

I was 20 years old, answering a friend’s question about my relationship with Jesus.

That line was a bunch of baloney, a straight-out lie—though not a malicious one. I really believed (or wanted to believe) that Jesus’s presence in my life was so palpable, so comforting, so real that being with Jesus felt like being with family.

I came to evangelicalism by accident; it was the rope I grabbed in a blind effort to save myself from drowning. By the second week of my college sophomore year, I was unexpectedly and desperately unhappy. My roommate and I screamed at each other until we were hoarse, I realized that (with a few exceptions) I didn’t even like most of the friends I’d made freshman year (with some exceptions, especially my freshman dorm mates), and I sobbed through everything from phone calls with my parents to the dead bunny scene in Fatal Attraction.

I went to my first meeting of InterVarsity Christian Fellowship (IVCF) because a new friend invited me, and I was grasping at anyone and anything that didn’t remind me of my unhappiness. In the chemistry lecture hall where we met every Friday night to sing, worship, and talk, I found the friends I wanted and the faith I needed.

From the beginning of my involvement in IVCF, I understood that aspects of the evangelical culture would never work for a New England Episcopalian like me. I retained my liberal political and social views, for example, in contrast with my new friends’ conservatism. But in other areas, I tried out a more evangelical way of doing things, including an emphasis on one’s “personal relationship with God.” My friends spoke to and about God and Jesus with casual familiarity; prayer was conversational (and could also be rambling and dull), and worship music featured lyrics that could easily be mistaken for those of love songs. I was apparently supposed to talk to and feel about God the same way I would talk to and feel about the people to whom I was closest. So when my friend asked about my relationship with Jesus, the brother analogy was what popped into my head.

I knew as soon as I said it that my claim about Jesus was false, not least because my relationship with my actual brother was troubled and distant; I had assigned Jesus a role that I understood more from wishful thinking than experience. More basically, I had never felt close to Jesus, never felt comforted by or certain of Jesus’s presence. Jesus was a figure more likely to stir up annoyance, confusion, and frustration than waves of familiar and forgiving love.

I am writing in the past tense but all of this is still true.

I said to my friend what I wished were true, and what I thought should be true. In the almost 30 years since, however, I’ve become less sure that the casual intimacy with God that prevailed in my college fellowship is preferable or even possible. I wonder if making Jesus into our brother and our buddy remakes the divine in our image instead of the other way around, so that we end up making God too small and ourselves—our daily concerns and habits and priorities—too big. Many of my evangelical friends saw the Episcopal tradition in which I’d grown up (and to which I ultimately returned) as overly formal, too many steps removed from a God who loves us and wants to be with us, as empty ritual. And it can be all those things. But formality and ritual can also give us the means to approach the unapproachable, language to speak of and to the One who exists beyond the limits of language, words to say when we don’t know what to say.

If someone were to ask me today about my relationship with Jesus, I might say that  Jesus is baffling, exasperating, and absurd because he speaks in riddles and makes impossible demands and asks me to follow him even though I don’t know how to follow someone I don’t understand or even like half the time. I might confess that I resent him for being a man and single and able-bodied and dying young and having no children and therefore having nothing to say about the things that make me who I am—which is nothing like Jesus. I might say I wish God had become incarnate as someone else—a woman would have been nice, a mother even better—but Jesus is what we’ve got so I’m trying to make it work.

On a Friday afternoon in August 2002, my daughter, not quite three years old, slipped on a book, fell to the floor and began to scream. Though I should have known better—I knew she had inherited my brittle bone disorder and therefore a fall followed by a scream meant something was broken—I instinctively picked her up and pulled her onto my lap. She screamed louder. She screamed until her face was red and her blonde curls plastered to her head.

By the time we arrived at the pediatric emergency room, I knew she had a broken femur. Leah had broken other bones before this, but because the femur is the largest bone in the body surrounded by some of the strongest muscles in the body, a fractured femur is particularly awful— terribly painful, prone to causing muscle spasms the first 24 hours post-fracture that render sleep elusive (the minute the muscles start to relax, they clench involuntarily, causing sharp and sudden pain), and requiring uncomfortable immobilization of both the knee and the hip joint.

Early the next morning, with Leah finally asleep on our pull-out couch, I wrote an email to some friends to let them know what happened, describing how awful it was to be sitting on our floor with my screaming child. One friend responded, “I don’t know what to say, except that I believe that Jesus was there on the floor with you.”

That image of Jesus being with us on the floor made me feel a little bit better. It’s still the image I think of when I’m exasperated or confused by Jesus and tempted to leave him behind for some nice wishy-washy spirituality that doesn’t require anything of me.

But here’s what I don’t understand: Why does this image of Jesus on the floor with us make me feel better? Whether or not Jesus was there with us, it was still a horrible moment. It makes no sense that an after-the-fact reminder that Jesus was there with us, a reminder that made not one bit of difference in how things actually happened and how much pain we experienced then and afterward, should make me feel better.

Jesus is a lot of things to a lot of people: A brother, a friend, a model for social and political action, a weapon, a threat, a guy transformed by history into something he never was or wanted to be, a prophet, an annoyance, a stand-in for everyone who ever loved you or everyone who ever hurt you, a victim, a sacrifice, a son.

For me, Jesus is the one who is with me in a way so profound and mysterious that I cannot explain how or why it matters that he is, only that it does matter. I cannot explain how or why believing that Jesus is with me comforts me, because it sure doesn’t make anything easier, only that it does comfort me. Thinking of Jesus this way doesn’t prove anything, won’t win converts to Christ, is easily dismissed as mere sentimentality, is irrational, and doesn’t make me less perplexed, confused, or irked by everything about Jesus that I dislike, can’t relate to, and don’t understand (which is a lot). But somehow, it is enough.

In the first episode of season 3 of the BBC’s television series Sherlock, Watson is shocked to discover, after two years of grieving Sherlock’s suicide, that Sherlock is still alive. At the end of the episode, Watson says to Sherlock, “When you were dead, I went to your grave. I gave a little speech. I actually spoke to you.” Sherlock (who, as the audience knows, was hiding in the cemetery when Watson visited his grave) responds, “I know. I was there.” Watson continues, “I asked you for one more miracle. I asked you to stop being dead.” And Sherlock says, “I heard you.”

It took Sherlock two years to “stop being dead,” and come back to his friend. Two years during which Watson cut ties to the people and places who reminded him of Sherlock and remained stuck in a pit of grief until a new love finally allowed him to look forward to life without Sherlock. Sherlock’s assurance that he was there with Watson, that he was there in Watson’s grief and abandonment in a way that Watson couldn’t perceive at the time, does nothing to ease the pain of those two lonely years. But it’s enough for Watson to stick with his exasperating friend even when he doesn’t understand or particularly like him.

I don’t know that I’ll ever experience Jesus as a tangible companion whose presence I perceive in real time. But somehow believing that Jesus has been with me in my places of grief and abandonment, in a way I can’t perceive at the time, is enough for me to stick with Jesus even when I don’t understand or particularly like him. 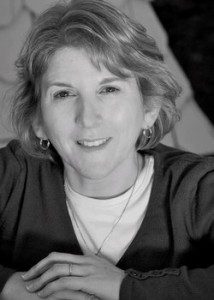 Ellen Painter Dollar is the author of No Easy Choice. She blogs about parenthood, disability, ethics, and the crooked way of grace at http://www.patheos.com/blogs/ellenpainterdollar/ 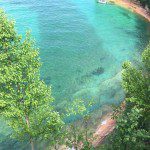 July 14, 2016
St. Kateri, Pray for the National Parks and Against Our Abuse of God's Creation
Next Post 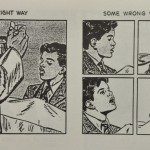 July 18, 2016 I went to Communion and You'll Never Believe What Happened Next!
Recent Comments
0 | Leave a Comment
Browse Our Archives
get the latest from
Sick Pilgrim
Sign up for our newsletter
POPULAR AT PATHEOS Catholic
1