I went to Communion and You’ll Never Believe What Happened Next!

I saw that it is the will of Christ’s love to be put into the hands of sinners, to trust Himself to men, that He may be their gift to one another, that they may comfort Him in each other, give Him to each other. In this sense the ordinary life itself becomes sacramental, and every action of anyone at all has an eternal meaning.

I knew too that since Christ is One in all men, as He is One in countless Hosts, everyone is included in Him; there can be no outcasts, no excommunicates, excepting those who excommunicate themselves—and they too may be saved, Christ rising from death in them

The last few weeks have been brutal. African American men, officers of the law, innocent people in France, dancers at a nightclub in Orlando have all lost their lives in a hail of bullets and the gunning of a truck engine. The weight of the sorrow and sadness is becoming too much for us to bear. We feel alone, scared, and not sure where to turn.

Very often, in our fear, we turn to the wrong things and let people take advantage of that fear. We turn to politicians, big leaders and big groups that we believe will change our course. The sad truth is these sorts of people aren’t that interested in real change. Why? Because the need for their existence would disappear. For example, if gun owners stopped fearing the government and crying about the second amendment rights taken away, the high priests of the Gun Cult, the NRA, would be out of a job. If we really took care of mothers and babies, and if we really respected women, we’d no longer have to hear Planned Parenthood claim to be the “protectors” of women’s rights.

On top of all this, we’ve got politicians, interest groups and others trying to use these deaths to gain some kind of cheap political point. We’ve got cheap rallying calls and slogans to make everything “great again.” Whatever the hell that means. (Though we Sick Pilgrims suspect it means going back to a time when we didn’t talk about unsavory things like deeply embedded, historical, institutionalized racism.) We suspect these people don’t really care about the Images of God who were snuffed out in a wink. They only care about agendas, furthering their own, and demonizing the other’s.

Lately, I’ve been thinking over the creeping sense of hopelessness and fear in my own heart. I’ve been fighting against the temptation to despair. There seemed to be no way out of the darkness of my own heart and mind.

Then I went to mass on Saturday with my hooligans. I’ll be honest, there are plenty times I go to mass and I just don’t feel anything. My mind and heart are cold, not open to anything or anyone. I felt that on Saturday when I took my kids.

So, why did I even bother? Because I knew Jesus would be there. One of the reasons I became a Catholic is the Eucharist. The conviction that Christ is bodily and spiritually present in the bread and wine was enough to overwhelm any of my previous Protestant doubts. In the struggling darkness of the past few years, I’ve clung hard to the visible presence of Christ that I receive during communion. Some days, it’s all I have that resembles any sort of faith.

But something interesting happened on Saturday. After taking the Body and Blood, I knelt in my pew, ready to bow my head to think about the Mystery coursing through my veins. Then something prompted me to keep my head up and watch all the people streaming past me to the altar.

Here is what I saw:

-A Vietnamese family whispering to each other in a language that would take me years to learn. They smiled at each other, gripping hands, and bowed their heads. Their joy rushed out of them like a cascading waterfall.

-A single woman, probably about my age, head bowed, tears pouring down her cheeks. I have no idea why she was crying. Was it sadness? Joy? Something else?

-An older couple, leaning on each other as they shuffled towards the altar. How many times had they done that, helping each other towards Jesus? What burdens bent their backs over the course of their lives? What had they survived? How had Jesus helped them?

-An African American man and his white wife herding their white wandering kids up the aisle. The tats on her arms poking out as she corralled their two energetic children. She nodded to him and spoke unheard words with her looks. He smiled, took one of the children in his arms, working as a team with his wife. All of them ready to received Jesus.

-A girl, probably aged two like Cindy Lou Hoo, decided it would be a good idea to crawl on all fours towards the altar. For a moment, her mom looked at her, startled, and then picked her up. I’m sure she felt embarrassed, as any parent would. But what she couldn’t see behind her was how everyone smiled at the little girl. And I couldn’t help thinking that maybe, just maybe, the two year old had the right idea.

-Joe and Susie Sorority, hands intertwined as they gazed back and forth at each other. The cynical among us would probably imagine these two are having carnal relations on a regular basis. Maybe. Maybe not. Whatever, they know they need to eat Jesus.

-A few single hispanic women with their heads bowed, perhaps deep in prayer, perhaps contemplating the mysteries of God, all while a presidential candidate pretends he is not prejudiced against them.

-A large group of college students on their way back to Wisconsin from a two week long missions trip. A geeky kid with a Dr. Who t-shirt looks wistfully at the girl ahead of him, a look of pure love and sadness on his face. Maybe he knows he may not ever be able to talk to her or have her see him as anything more than a friend. But he loves her all the same.

-There’s the dad who challenges me every Sunday, even though I’ve never had a conversation with him. He is a good looking man, strong jaw, and put together. Seen on the street, some might say he is the personification of everything evil, a white male accorded given every privilege in life.  And probably arrogant to boot.

Except he is carrying his twelve year old son, body twisted with cerebral palsy, up to the altar to be blessed. He took the Body and Blood of Christ, then made his way to his seat. For a while, he held his son, who gazed back at him. The dad’s love radiated from his face and warmed his son, who smiled at him. He smoothed out his son’s hair, and kissed him on the forehead. And I cried at the Mercy of God. Even though I don’t know this man’s name, he is my spiritual father.

-And, finally, my own kids, not able to take the sacrament, but kneeling, heads bowed in prayer. My little mouse’s eyes twitch and I wonder what she’s praying. She loves Jesus, as she tells me over and over. All my kids do. But they tell me they’re not ready to receive Him  in the Eucharist. I have to trust He will keep calling them.

As I took them all in, I realized this is my large, dysfunctional family and they helped me find hope again, as they do every Sunday. We all eat at the same table of grace: Black, whites, hispanics, asians, Republicans, Democrats, cops, right and left wing nut jobs, artists, business people, lawyers, ditch diggers, teachers, disabled, athletes and me, a sick pilgrim, divorced, and wondering what I’m going to be when i grow up at the age of 42.

And, I realize, this is why God chose the church to be priests to the world. Not because we are worthy, but to show that he’ll let anyone in the door. 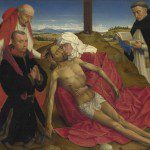 July 15, 2016
Dark Devotional: Finding Jesus on the Floor
Next Post 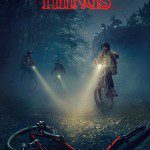 July 20, 2016 Sick Pilgrim Chats: Jonathan and Jess Bingewatch Stranger Things
Recent Comments
0 | Leave a Comment
"I too have wondered this, but have never seen it brought up before except in ..."
Makishima When NFP Doesn’t Work: A Conclusion ..."
""Stay away from married men, married women, ordained priests and religious sisters and nuns.Respect the ..."
Proud Reaganista What I Learned from Dating a ..."
"Linda, have you found God yet? or are you still being evil?"
Jasper What I Learned from Dating a ..."
"What age do you think this book is appropriate for? I'll put it on my ..."
Biking in a skirt Rereading “I Walk with Jesus” in ..."
Browse Our Archives
Follow Us!

Not a Gumball God - A...
Faith on the Couch
Related posts from Sick Pilgrim