Resistance is our Charism: Why Sick Pilgrims are Catholic rebels with a cause

Resistance is our Charism: Why Sick Pilgrims are Catholic rebels with a cause July 27, 2016 Jonathan Ryan

People are always asking what Sick Pilgrim is about and what we want to accomplish. It would be great to say we had all this planned out and a vision for how it would go. We didn’t. Not really. We just knew we were different–square pegs–and we wanted to find the others who were like us. But in the months following, we’ve stepped back and looked at what we are, what we want Sick Pilgrim to be about and where want it to go.

Vision statements aren’t very Catholic, to be honest. Neither are “life goals.” Our life goals are to stumble towards Christ, being saints and the complicated love of the church. We Catholics have a word for it: Charism. Charism is one of this weird, strange and bizarre Catholic words. It means, roughly, the spiritual gifts given to folks to help the growth of the church.

What is ours? Well, we hope to outline this in the next few weeks. Our Charism has a few parts.

To begin, Sick Pilgrim’s Charism is: We Practice Catholic Rebellion.

The hilarious British TV show, Horrible Histories (my favorite is the “Stupid Deaths” segments), had a segment called “Fawkes Thirteen”. It’s about the Gunpowder Plot to blow up the British parliament. There is a hilarious exchange that goes like this:

Fawkes: So, we are gonna blow up King James and his entire family?

John Wright: Because you’re a Catholic, and I’m a Catholic and the king hates Catholics. He think we are always plotting something.

Behind the humor is a historical truth: everyone always thinks the Catholics are plotting something, either rebellion, sedition or assassination. Of course, most of those rumors are unfounded and not true. But, they do contain a grain of truth. Catholics always stand apart from the culture around them. We’re committed to Christ and His Church first. Everything else is second. And thus, we often find ourselves at odds with both the right and left wings of various cultures.

But, at the same time, Catholics can become too in love with their culture and political power. Our history is full of historical examples (Crusades, etc). Modern day American Catholics often follow that sad history. The left usually loves Thomas Merton or Dorothy Day, but hate Pope St. John Paul’s intense Marian devotion and defense of the unborn. On the right, they defend traditional marriage and religious freedom, but they can’t stand Pope Francis’s passionate defense of the environment and love for gay people.

You see, if we are really living the Catholic faith, we will piss everyone off. And that’s a good thing. So, maybe we should start being known for plotting and secret agendas. Not to violently overthrow governments, but a harden resistance to the Spirit of the Age, no matter where we find it.

So at Sick Pilgrim, the instrument of our rebellion will come through the arts. We’re not business types, lawyers or doctors. Neither are we fit for the clergy. Those realms belong to others with different talents and vocations. Here at Sick Pilgrim, we are writers, given the gift of St. Francis de Sales to use for the growth of God’s church.

We feel like Catholic artists need to become more dangerous and unpredictable in their art. But we shouldn’t just challenge the Spirit of the Age. No, that’s not enough. Instead, we should propose answers. Anyone can raise questions and be a critic. Questioning is safe and easy, the kind of thing that will enable us to sit, drink wine/coffee at our nearest intellectual center. But, what about the answers? Modern artistic culture has been allergic to anything that resembles certainty, finding comfort in the margins. We find comfort there too, but it’s not enough anymore. We sick pilgrims don’t live in the edges for our own comfort or useless Catholic navel gazing. We’re trying to find the truth. Catholic art should be about grappling, wrestling with not just the questions, but with the truths we find.

And with that instrument of Rebellion, we will resist:

The desire to “fit in.” Too often, we find ourselves in love with trying to be respectable to whatever tribe we identify with in our culture. On the right side, we want to bow at the altar of the so-called religious conservatives like Jerry Fawell Jr. On the left, we want cool people to like us because we are “hip” or “not like” those crazy Christians. Both sides come from wanting to be respected and liked. It’s a natural impulse, but dangerous if not thought through. We have to rebel against. what comes naturally to us.

Catholics are weird. We eat Jesus, cross ourselves and sprinkle things with Holy Water. Our attempts to fit into normal culture don’t usually work out very well. Thus, when we try, it usually ends badly. It’s time that Catholics embrace our weirdness, which is God given. We’re called to stand out, rebel and take down the world system. That is a our call, our birthright. It’s not a call to be comfortable or respectable.

People as commodities, measured by what they “produce” or “do.” Whether it’s the desire to have abortion on demand, or exploiting workers through fighting increases to the minimum wage, or shooting black people, all have the same sickness at their root: the culture of death. That culture embraced the idea that other concerns most always trump the Image of God. That is, people are looked as either assets or liabilities. This is true whether it’s a corporation or a progressive cause that seek to ignore the human person. Thus, human life becomes very cheap. Safety, comfort, protection, and sneering all become more important. The antidote to all this is not to defeat Trump in the election. Rather, it is to raise our voices against the culture that produced him, that refuses to see the Image of God in each person, not just those that agree with us.

The environment as a commodity. Catholics have a long history of protecting and nurturing the environment that includes people like St. Francis. And yet, Right Wing Catholics screamed about Pope Francis’s Laudato Si, which follows that tradition to the letter. They’ve allowed their political goals and love of power to blind them to the nature of the exploitation of the environment. Which, again, is measured by its monetary value rather than its inherent value.

None of this is very easy, to be honest. No one likes to be a disturber of the peace. It’s not an easy road, but it’s the road of the Kingdom (Coming) of God.

The idea of a rebellion is an unsettling thing. It means change, resistance and a fight. Nobody likes those things. But a soul draining faux “peace” is worse. 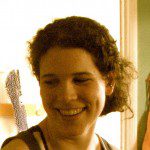 July 22, 2016
Dark Devotional: An Argument with St. Paul about some Biblical Platitudes
Next Post 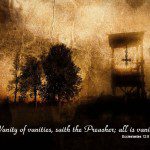 July 28, 2016 Dark Devotional: Obsessive Compulsive Ecclesiastes
Recent Comments
0 | Leave a Comment
"https://www.youtube.com/wat..."
Theodore Seeber How Blogs Hurt (and Help) the ..."
"I agree with Jacobs. Our writer could have bowed to the altar in the Episcopalian ..."
edlondinium Dark Devotional: The Case of the ..."
"Oh dear. Shades of Pascal's wager. What I choose to do with my life is ..."
Linguagroover Dark Devotional: On the Outside with ..."
"A serious study of Catholicism will show that Jesus' Gospel message was and is a ..."
Jo Ann Elder-Nativity Dark Devotional: On the Outside with ..."
Browse Our Archives
get the latest from
Sick Pilgrim
Sign up for our newsletter
POPULAR AT PATHEOS Catholic
1 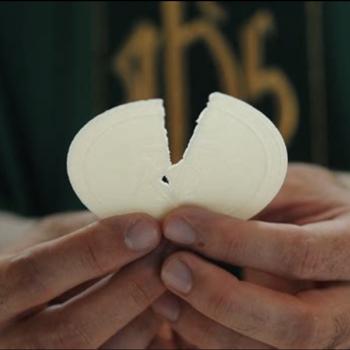