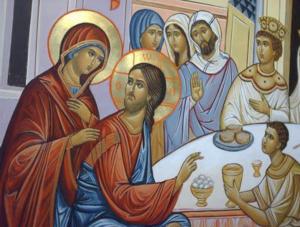 Weddings are stressful, even when everyone is behaving themselves. When people start misbehaving, weddings can be hell.

The first time I was involved in a wedding, the bride cheerfully announced at the outset that she planned to be a bridezilla. I laughed because I thought she was joking. Unfortunately, that wasn’t the case. By the day of the wedding, I had spent far beyond my projected budget, in part because of attire changes the bride demanded; I was stuffed into a dress I loathed; and I was running on two hours of sleep because the bride had kept her bridal maidens up past midnight, then woke us at 4 AM for professional hair and makeup. I drove home from the wedding, barely conscious, and fell into bed—only to spring up again to take a shower to wash out the spray that had turned my hair into a helmet.

After that experience, I never took part in planning a wedding again, and rarely chose to accept invitations to attend as a guest.

It’s easy then for me to imagine the Virgin Mary taking stock of the liquor supply at the wedding in Cana and groaning. We don’t know how she was related to the bridal couple, but she probably was related to them. Weddings were a big deal in ancient Israel, and families were deeply involved in planning and hosting the events. For a culture in which hospitality was a sacred obligation, running out of wine would be a major cause of embarrassment for the newlyweds and their parents.

The interesting question is why did Mary think her Son could do anything about the problem? With two thousand years of hindsight, it’s easy to think she just knew her Son could work miracles. But did she?

If you read St. Luke’s account of the Annunciation carefully, the archangel Gabriel doesn’t give Mary a lot of details about what being Son of the Most High would mean for her expected child. Does it mean that her Son will be favored by God in the same way Gabriel has just said Mary was favored by God (Luke 1:28–33)? If so, that doesn’t mean he’d necessarily be able to work miracles.

While some early Christian writers liked to imagine the Boy Jesus turning clay birds into live birds, theologians generally agree that the miracle at Cana was Jesus’ very first miracle, not merely his first public miracle. His miracles weren’t intended to be spectacles for the sake of the spectacular. They weren’t intended as divine shortcuts to getting what he wanted, or saving people trouble (much less saving them embarrassment). They were signs from heaven confirming his identity as God’s Son and the long-awaited Messiah of Israel:

“The signs worked by Jesus attest that the Father has sent him. They invite belief in him. To those who turn to him in faith, he grants what they ask. So miracles strengthen faith in the One who does his Father’s works; they bear witness that he is the Son of God. But his miracles can also be occasions for ‘offense’; they are not intended to satisfy people’s curiosity or desire for magic. Despite his evident miracles some people reject Jesus; he is even accused of acting by the power of demons” (Catechism of the Catholic Church 548).

So, why did Mary think Jesus could turn water into wine?

It’s pretty obvious from the story of the wedding at Cana that Mary wasn’t actually demanding her Son work a miracle. St. John said she merely presented Jesus with a problem that had cropped up during the wedding festivities. “They have no wine” (John 2:3). She didn’t even say anything about why that was a problem. She didn’t argue the case or ask her Son to do anything. When Jesus more or less asked her, “Why is this my problem?” she simply turned away and told the servers to “do whatever he tells you” (v. 5).

Perhaps Mary had no idea what Jesus would do in response to her concern. Maybe all she knew was that there was a problem, that the hosts (who may have been her own relatives) would be upset and embarrassed to run out of wine during the celebration of their child’s wedding. She took that problem to her Son and trusted him to do with it as he would.

Is this not the essence of prayer? Rather than treating Jesus as a divine bellhop, demanding that he do something already, Mary brought her problem to her Son and trusted him to respond in whatever manner he saw fit. When she talked to the servers, she didn’t tell them what Jesus was going to do. She told them to do “whatever” he told them to do. Had Jesus chosen not to act at all, it seems likely that Mary would have accepted that response without complaint.

All in all, it might be said that the wedding at Cana was a foreshadowing of Christ’s agony in the Garden of Gethsemane. There, we see Jesus as the supplicant before his heavenly Father, sweating blood in anticipation of the cross (Luke 22:44). At the wedding in Cana, the cup that Jesus had sent to the headwaiter was filled with fine wine, wine that tasted so good that the headwaiter was shocked his staff didn’t serve this wine first and save the inferior stuff for last (John 2:6–10). In Gethsemane, Jesus begged that he be spared from drinking from the cup offered to him, but pledged to fulfill his Father’s will regardless (Luke 22:42).

Perhaps prayer isn’t so much about getting what we want as it is about conditioning ourselves to accepting what will happen while trusting that God will bring good from a bad situation.

Which may be all well and good from a theological perspective, but is hardly satisfying when bad things happen to good people. Resigning ourselves to “the will of God” when crap happens is not far removed from fatalism, is it?

Fatalism is the belief that nothing we do matters. But Mary didn’t simply shrug when the wine ran out. She took her problem to her Son. In Gethsemane, Jesus brought his problem to his Father. The divine answers in each case were different—Jesus replenished the wine at Cana; in response to his prayer in Gethsemane, an angel was sent to strengthen Jesus for his task (Luke 22:43).

Unlike fatalism, faith is the trust that God will respond in some way to our need. He may not give us what we hope for, or even what we think we need, but faith is the belief that he hears us and answers us in some way.

Of course, that doesn’t mean that we’ll always like the answer we receive. Perhaps we don’t have to like the answer. After all, even though he was sent an angel to strengthen him in Gethsemane, Jesus still cried out from the cross about being abandoned by God (Matt. 27:46).

Perhaps an occasionally bitter faith is better than no faith at all. 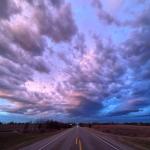 January 7, 2022
Dark Devotional: Faith is a Tension
Next Post

January 17, 2022 Things Keeping Us Going: MLK Day Edition
Recent Comments
0 | Leave a Comment
"https://www.youtube.com/wat..."
Theodore Seeber How Blogs Hurt (and Help) the ..."
"I agree with Jacobs. Our writer could have bowed to the altar in the Episcopalian ..."
edlondinium Dark Devotional: The Case of the ..."
"Oh dear. Shades of Pascal's wager. What I choose to do with my life is ..."
Linguagroover Dark Devotional: On the Outside with ..."
"A serious study of Catholicism will show that Jesus' Gospel message was and is a ..."
Jo Ann Elder-Nativity Dark Devotional: On the Outside with ..."
Browse Our Archives
Related posts from Sick Pilgrim