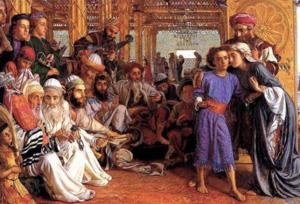 When his parents saw him, they were astonished, and his mother said to him, “Son, why have you done this to us? Your father and I have been looking for you with great anxiety” (Luke 2:48).

’Twas the Sunday after Christmas and all through conservative Catholicland the great post-Christmas drama for fundamentalist Catholics is whether the lector will read the “long” version of the epistle during the liturgy of the word. Never mind that the rubrics permit using the approved “short” version of some of the Scripture readings at Mass. Reading the long version of St. Paul’s letter to the Colossians on the Feast of the Holy Family is considered a litmus test for the orthodoxy of a parish.

Why? Because we will know they are orthodox by whether they are “unafraid” to read St. Paul’s instruction to women on how to be a Good Wife: “Wives, be subordinate to your husbands, as is proper in the Lord” (Col. 3:18). Bonus points for the orthodoxy scorecard if Father devotes his homily to lecturing the women of the congregation in their duty to “submit” to their menfolk.

In my quarter-century as a Catholic, whether I heard the long version of the epistle reading for the Feast of the Holy Family was hit or miss. Some years I did, others I didn’t. I never have heard a homily on wifely submission. Once though, I did hear a homily in which the priest bragged that his homily the previous week, devoted to The Evils of Contraception, had caused one woman to walk out of Mass while he was preaching. (How he knew that woman left in a huff over his homily and wasn’t merely retiring to the ladies’ restroom for a few minutes, he didn’t say.)

If social media is any indicator, there are Catholics who do get to hear lectures about what wives owe their husbands on the feast that celebrates the hidden life of Jesus, Mary, and Joseph, especially if they attend Traditionalist chapels. Some mainstream homilists cloak their lectures in “mutual submission” jargon, telling husbands to love their wives, too. But those preachers don’t tend to get the same rave reviews as the old-fashioned, no-nonsense, tell-it-like-it-is, who-cares-about-your-feelings admonitions that Good Wives do what their husbands tell them to do.

While I was perusing the Scripture readings for this week’s Dark Devotional, I was wondering what more could be said about St. Paul, who was probably a lifelong bachelor, and his insistence on telling married couples how to run their lives. Not feeling particularly inspired to take on the task of wagging my finger at St. Paul, I went through the other readings, hoping I could find something else to talk about.

That’s when I noticed a continuity between the Old Testament reading and the Gospel that I’d never noticed before.

In the middle of a long ode to male privilege as The Authority in the family, the author of Sirach slides in a surprising footnote: “a mother’s authority he confirms over her sons” (Sir. 3:2).

Huh. What was that all about? The rest of the Old Testament reading that is proclaimed at Mass is mostly about honoring your father and how doing so will bring lots of rewards—including pleasing your mom (Sir. 3:6). But for one brief line, the author digresses to say that a mother has authority over her sons. Not her children, her sons.

Then I looked at the Gospel reading. My eyes widened. I knew the story of course. The Holy Family is returning to Nazareth after spending the Passover holiday in Jerusalem. Tween Jesus chose to stay behind in the Temple—without informing his parents. Joseph and Mary traveled for a full day without realizing Jesus wasn’t somewhere in the caravan. Once they discovered he was missing, they had to travel a full day back to Jerusalem to hunt him down.

It’s worth pausing a moment to note that there was a reason these trips were made in caravans. Lone travelers were a prime target for bandits, as Jesus himself made clear in his parable of the Good Samaritan (Luke 10:30). When Joseph and Mary returned to Jerusalem, they very likely had to travel alone.

So, it’s little wonder that when they found their son hanging out in the Temple, listening to the rabbis and asking them questions, that Mary was probably a tad bit annoyed with her son, saying, “Son, why have you done this to us? Your father and I have been looking for you with great anxiety” (Luke 2:48).

But for the whole immaculately conceived, sinless thing, which probably tempered her temper, she might well have said, “What the hell, Jesus? Do you realize you left your father and me to travel a full day back to Jerusalem, by ourselves, exposing us to bandits, just so you could schmooze with the rabbis? And that we’ll now have to make the journey back to Nazareth without the safety of the caravan?”

But it’s not Mary’s words alone that are surprising. What is also surprising is Joseph’s silence. As Frank Sheed observed in his life of Christ, “In any family a small boy who absents himself without permission for three days may expect to hear from his father!” In this case though, Joseph defers to Mary to speak to Jesus. She invokes Joseph in admonishing Jesus, but she’s the one speaking with authority to her son. Joseph doesn’t pull out his Head of the Holy Family privilege to deal with the situation.

Jesus did have a few words to say about why he stayed behind, telling his parents that he was “in my Father’s house” (Luke 2:49). Some have interpreted his words to be somewhat sassy, along the lines of “Sheesh, Mom, couldn’t you have guessed where I’d be?” I’ve always read them as puzzled: “I’m sorry, Mom, you know me so well I thought you’d have guessed where to look first for me.” Either way, after that, “he went down with them and came to Nazareth, and was obedient to them” (v. 51).

Every year on the Feast of the Holy Family, we hear a lot about St. Paul’s ideas on authority in the family and male privilege. Perhaps one of these years we’ll hear about how Scripture is a lot more nuanced than fundamentalist Catholics care to admit. Perhaps some homilist will finally tell his congregation that the Holy Family doesn’t fit easily into the box in which Traditionalists like to stuff them.

St. Therese of Lisieux once said she wished she could’ve been a priest so she could give a homily on the Blessed Virgin. She’d never heard one she liked, and wanted to talk about how Mary was “more mother than queen.” On the Feast of the Holy Family, we see Mary’s motherhood in action. 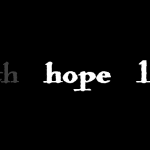 December 19, 2021
Fourth Sunday of Advent: Two Out of Three
Next Post 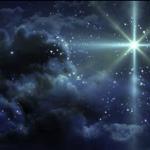