This week’s Gospel reading is Jesus’  postmortem parable of the nameless rich man and the poor dog-licked beggar, Lazarus. It’s a popular story in Christian circles, an uncomfortable analysis of what comfort looks like to Christ.

Though the story of a rich man damned because he tends only to himself should shake me to my selfish core, I find myself struck most by the last lines of this passage.

“Then Abraham said, ‘If they will not listen to Moses and the prophets, neither will they be persuaded if someone should rise from the dead.’”

Of course anyone would be more persuaded by the words of one risen from the dead than words they heard at church. That’s laughably illogical. Already it’s not always easy to balance faith with living honestly.

I guess “balance” is the keyword there. Christianity is based on a mad balancing act: acknowledging both the measurable world and an enigmatic, unknowable infinity.

Sometimes I tend to root myself in one extreme or the other: evidence or dreams. But most times I’m here clumsily teetering.

The only thing keeping me from entirely abandoning anything that lacks solid proof is the reality of love. Illogical. Nonsensical. Yet undeniable. Love. That crazy little thing, at times seems altruistic and at times selfish. Not the flowery and eye-rollingly sickening type, typically found in movies starring Meg Ryan. But the kind involving denying oneself for others. The comforting lepers type. The volunteering to replace a family man in a death-camp type.

I don’t get it, but that won’t stop me from living according to it.

Christianity is all about balancing. We are rooted in the contradictory belief of a God who was fully human and was also fully a deity, who died to conquer our death. Maybe the only reason I buy that is because charity means more to me than donating to an organization.

I guess I don’t need a risen corpse to tell me that. 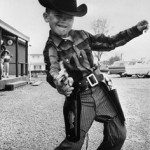 September 22, 2016
Raising my son in an age of gun worship and racial violence
Next Post 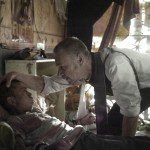 September 27, 2016 Why Do We Need The Exorcist and Pope Francis? A Review
Recent Comments
0 | Leave a Comment
Browse Our Archives
get the latest from
Sick Pilgrim
Sign up for our newsletter
POPULAR AT PATHEOS Catholic
1