On Monday I binge-watched three episodes of The Exorcist, the new Fox show, and when I was done I had to face the dark hallway that led to my dark bedroom, where my children were asleep, as usual, in my bed. I made it to the bathroom, turned on the light, pulled back the shower curtain in one quick move. I always fear finding something otherworldly behind the curtain. Even on my best days.

I faced the bathroom mirror, managed to stay steady and take out my contact lenses, the skin on the back of my neck tingling. The air in the house was thick, charged–with what, I don’t know. My fear, I guess, like electricity, buzzing and ready to spark. I was suddenly convinced of something, everything, watching, alert.

My house is full of religious paraphernalia. I collect icons and vintage church goods. Rosaries dangle from a deer antler in the entryway. In an antique glass-front cabinet, I keep holy cards, medals, candles, my children’s baptismal garments, and the few fragile, irreplaceable objects a friend salvaged for me from my home parish after Hurricane Katrina. I walk by these objects a hundred times a day without taking notice. When I do, they’re a comfort to me. Sometimes I handle the objects from my old church, as if they can connect me across space and time with my childhood home. When friends need prayer, I light all the candles.

But after watching The Exorcist, I became suddenly afraid of my own collection. These things were no longer comforting, or decorative, or inert. The cabinet itself seemed to take on a deeper dimension, like Lewis’s wardrobe. As I lay fitfully awake in my dark bedroom, I thought of it as filled with totems and weaponry I could never fully appreciate or understand.

There’s a moment in the show that captures that feeling: as a flashlight illuminates the innocent religious goods stored in a church basement–a statue of a saint, a nativity set. In the light’s beam, even these sentimental emblems become suddenly unnerving. Catholic kitsch moves effortlessly from banal to creepy.

The Exorcist isn’t a great show. It’s marred by a ridiculous and unnecessary demonic conspiracy subplot. It’s gratuitously gory. But as Catholic writer Nick Ripatrazone predicted in The Atlantic, it may be that in our current, secular context, a show like The Exorcist just doesn’t make any sense. Its premise can only be seen as absurd and unbelievable. The ratings are low; it’s likely to be canceled.

But as I lay there in the dark, I thought, my own life has been ridiculous, unnecessary, gratuitously violent, with all the elements of an absurd and unbelievable plot. My mother died young and fast of a freakish, aggressive cancer nobody could explain. My best friend and one of my high school boyfriends also died under mysterious circumstances. Other friends and family have committed suicide, gone insane. And there’s more. Lots more. Stuff that’s less dramatic, easier to overlook, until I tell stories about my childhood and hear from friends, Jess, that wasn’t normal.

You mean your childhood dance teacher didn’t have you doing ballet in the dark to the Alice Cooper song “Black Juju?”

Maybe demonic conspiracy, or, as Christians call it, spiritual warfare, will always look ridiculous, unfathomable according to our accustomed reality. We assume that evil is subtle, pernicious. Until it’s not. Until it’s unfathomable mass murder, genocide, children dead, or kidnapped and sold into slavery. Even in the context of one life, on a small scale, when evil wins, it often appears absurd.

It sure hasn’t been subtle in my life. I grew up in Southern Louisiana, a place that is as haunted as you imagine it to be, and even more polluted. There’s something there, something dark and sinister, my sister and I think, when we visit each other and get into the wine and talk late into the night. Maybe it’s just the creosote that was in the ground water. But something has taken everything we’ve ever loved and twisted or killed it.

Lying in my dark bed, unable to sleep, unable to move, paralyzed by my own fear, I think not of The Exorcist but of my own history, and I wonder if it’s all true. If the devil is real and prowling for souls, what recourse do I have other than to arm myself with whatever weapons are available?

It goes on like this until the sun rises, and the fear disappears, becomes as absurd as the rest of it. I sleep at last, briefly but deeply, then wake to ready the children for school. I walk the dim hallway, toward the kitchen, pass the feared holy cabinet without a look. I am heavy-headed, out of sorts. But the icons on my walls are just paint on wood, no longer portals, eyes watching, guarding. 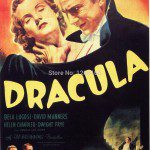 October 12, 2016
Scary Things You Should Watch (Other than the Presidential Election)
Next Post 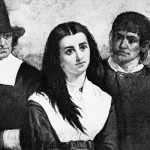 October 17, 2016 Burn the Catholic Witches! (Like Me)
Recent Comments
0 | Leave a Comment
"I too have wondered this, but have never seen it brought up before except in ..."
Makishima When NFP Doesn’t Work: A Conclusion ..."
""Stay away from married men, married women, ordained priests and religious sisters and nuns.Respect the ..."
Proud Reaganista What I Learned from Dating a ..."
"Linda, have you found God yet? or are you still being evil?"
Jasper What I Learned from Dating a ..."
"What age do you think this book is appropriate for? I'll put it on my ..."
Biking in a skirt Rereading “I Walk with Jesus” in ..."
Browse Our Archives
Follow Us!