I’ve been doing some research on American saints and martyrs. A few of these stories seem to be ripped from a modern horror novel. For example, there are the five North American martyrs who underwent burning, flaying, and beatings. But one particular martyr caught my eye in Brian O’Neel’s book, 150 North American Martyrs You Should Know. Why? Because the martyrdom took place just before one of the most infamous events in American History: the Salem Witch hysteria. And this martyrdom is interesting for all kinds of reasons, but especially as it highlights a common criticism of Catholics from both Protestant and atheist circles. That is, the Church seems way too old school pagan for their tastes.

Ann Glover was hanged as a witch in Boston on November 16, 1688. The reason for her death is that she supposedly admitted to being in league with the devil, consorted with “unseen spirits” and practiced witchcraft; at least, according to the “minister” who investigated her, the infamous Cotton Mather. She was actually a faithful Catholic.

Puritan New England recognized no difference between Catholicism and pagan witchcraft. Sermon after sermon, book after book attacked Papists with an unrelenting fury. Praying to the saints, making the sign of the cross and other Catholic practices made one a decadent pagan as much as doing rituals in dark forests away from prying eyes. Catholics were considered deceived by the devil at best, and outright in the league with the Whore of Babylon, the Pope in Rome.

Ann’s story is a prime example of what happened to Catholics in the 1700’s. She was rounded up by the forces of Oliver Cromwell, who almost wiped out Catholicism in Ireland through genocide and selling people into slavery. Ann and her husband were sold and shipped to Barbados. He died for refusing to renounce his Catholic faith. Ann and her daughters were then shipped to Boston and sold to John Goodwin.

Apparently, Ann never stopped being a Catholic, because she refused to go to the Puritan church. She and her children endured fierce persecution in Boston. All that came to a head when the Goodwin’s daughter, Martha, and Ann’s daughter had a disagreement over a dress. When Martha threatened to tell her father, Ann responded, “You can have us whipped, but we will not go to the sermons.”

Basically, Martha was trying to blackmail the Glovers into going to listen to a three-hour sermon marathon in a Puritan church. Not long after, the Goodwin children started to act “bewitched” and the infamous Cotton Mather came to investigate.

He found Ann to be “a scandalous old Irishwoman, very poor, a Roman Catholic and obstinate in idolatry…”. She was arrested and put on trial. In a common practice, Ann was asked to say the Lord’s Prayer, which she did in Gaelic and Latin, both in the Catholic form. It was judged she couldn’t finish the prayer and therefore she was in league with the devil. Even more damning to Mather and the Puritans, she was found to be with “images” that she used in “witchcraft.” Most likely, she had crude renderings of the saints in her possession. (Many modern-day practitioners of witchcraft use Catholic images and call on the saints–they know divine power when they see it.)

When Ann was lead to the gallows, she stated that she believed the children had been bewitched, but not by her. So killing her would do no good. Further, even more moving, she kept saying she forgave her killers. Her final words were, “I die a Catholic.”

Skeptics love to point out the obvious connections between Catholicism and paganism–as if the thought never occurred to faithful Catholic. I admit those connections bothered me too, even after my confirmation. I couldn’t deny there are some striking similarities. As a former Presbyterian pastor, I found it difficult to practice some of the stranger aspects of Catholicism, like praying to the saints, praying for the dead, and even the ritualistic nature of the Mass.

Then I considered an old story, the conversion of C.S. Lewis. He relates that he had a long discussion with Tolkien and Hugo Dyson as they pressed home their belief in Christianity. Finally, Tolkien pointed out that Christianity is the true myth that fulfills all the pagan dreams and wishes. That, for Lewis, was the final tipping point to bowing the knee to Christ.

Of course, this story is well known, but the full implications of it didn’t hit me until a few months ago. Tolkien was a Catholic and he was always nettled Lewis didn’t take the full plunge. To me, it seems as if Tolkien wanted Lewis to see that Catholicism was the closest thing to the pagan myths they all loved. The saints, the prayers for the dead, the bloody sacrifice of the Mass are all the final lights of which the pagan practices foreshadowed.

That’s why when someone calls me a pagan Catholic, I accept the slur with pride. I am that, in the best possible way. Human beings are ritualistic by nature. We seek it and desire it in every aspect of our lives. Many of us feel the saints watch over us and are in our lives. We see that sacrifice was needed to restore us to God through the person of Jesus Christ. All of the best of early paganism was enfolded and embraced and realized in the Catholic Church: including the myths, the mystery, and the reverence for nature as containing the imprint of the divine.

This probably means the “Reverend” Cotton Mather may haunt me someday. That’s okay. I’ll just light a candle, pray for the repose of his soul, and ask St. Francis de Sales to show him the way. 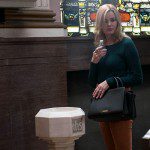 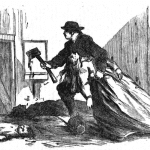 October 18, 2016 When the Angel of Death Comes, Play Jazz: The Axman of New Orleans
Recent Comments
0 | Leave a Comment
Browse Our Archives
Follow Us!