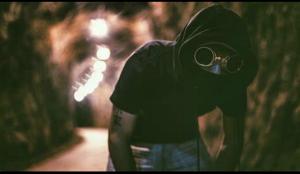 While they were still speaking about this, he stood in their midst and said to them, “Peace be with you.”
But they were startled and terrified and thought that they were seeing a ghost.

Then he said to them, “Why are you troubled?  And why do questions arise in your hearts? Look at my hands and my feet, that it is I myself. Touch me and see, because a ghost does not have flesh and bones as you can see I have.”
And as he said this, he showed them his hands and his feet.

I don’t believe in ghosts.  If I had been walking down the road, talking with my friend about Jesus, and he suddenly appeared in our midst and said, “Peace be with you”, I would not have assumed that I was looking at a ghost.  I would have figured that something was up with that crucifixion and resurrection story. I believe in what can be seen and touched, measured and quantified.  I would not have had to touch Jesus to know he was real.  I would never have occurred to me to believe otherwise.  Experience led me to this place.

We had a hard upbringing.  Our father was bipolar and chose to be unmedicated.  The effect of his disease on my family was profound.   The constant anxiety of never knowing what would be waiting when we came through the door:  plans for a drive to a covered bridge and a walk along the creek, taking us and our dog Sissy for ice cream at Dairy Queen, or someone who was so enraged that when we left a half-played board game on the floor of my room, we had to gather all our games and books outside and then were made to watch him set them on fire.

I remember one time my father coming home, racing around the corner to greet him, only to see him wearing a rubber monster mask.  I was so scared I wet my pants, dropped to the floor and couldn’t stop screaming.  It was as if he had taken off his human face and revealed his true nature.  There was the terror of listening to him pace throughout the old farmhouse we lived in, walking up and down the creaking wood floors, talking to himself about killing us and then himself.

Jesus did not meet us on our journey.  He certainly never asked me why I was so troubled and He offered no peace. My mother finally took matters into her own hands.  During their final argument she pulled a gun and fired it at my father.  She missed.  But my father left and never returned.

After many years of therapy, I finally found peace and was able to let down some defenses, fall in love, and marry.  I also learned a lot about myself.  I learned why I kept my husband at a distance and, while hoping for the best, was always prepared for the worst.  Always waiting for him to show me his true nature, the nature of all men, the nature of my father.  I learned why I’m not afraid of the dark and why I don’t believe ghosts.  The night or spirits and apparitions do not hold a candle to your father wielding a broomstick and beating you.  There is nothing more frightening than the monster who lived in my house.  I found that the only way I could keep myself in one piece was to completely cut off any communication with my father.  And I did.  I never spoke to my father again.  He died 27 years later.

The night he died my sister called me.  It was not unexpected.  He had been sick for several weeks and she called me when she came home and found him unresponsive.   He was transported to the hospital but taken off life support three days later.   I told my husband but didn’t cry; I would have told you that he had died to me a long time ago.  But that night I had a dream about my father.  He was a ghost.  I no longer knew where he was; he was not tethered to a body or a place, and I was no longer safe.  I would wake from these dreams startled and terrified, once more mired in the fear I had felt all those years ago, convinced my father’s ghost was present. For four nights in a row I dreamed of him, amorphous and dangerous, clinging to my husband, afraid of the dark, afraid of my father’s ghost.   We saw our therapist on the fifth day and I told her about his death and my dreams.  She said that my dreams were common for people who had grown up in abusive relationships and that what I was feeling and experiencing was perfectly normal.

I reached out and held my husband’s hand.  I felt his flesh and bones.  He was real.  I may not have seen Christ during those earlier years, but I saw him clearly now.  Beside me.  Accompanying me on my journey. Showing himself to me in the touch of my husband’s body.  And I never saw my father’s ghost again.

Annette Paulsen has a master’s in bioethics from Loyola University of Chicago. That and $4.75 will get you a venti White Chocolate Mocha at Starbucks.  She loves her husband, two sons, and two cats, though not always in that order. She works at a large academic medical center in oncology research and loves her job. She struggles through the pandemic though not in ways you would expect. The worst part consists of finding out how many people she either knows or is related to who are completely and utterly baffling in their backwards viewpoints.  She struggles with accepting people where they are, not sharing her opinions with them, and letting them suffer the consequences of their actions. She is a devout Catholic who loves the bells and smells, attends a Spanish-speaking parish filled with faithful, hardworking, loving people and is struggling to learn Spanish. Every day she gets out of bed, wondering if there is anything other than this life at this moment, gets dressed, and walks out the door in hope.

April 12, 2021
Things Keeping Us Going: Squeezed All the Juice Out of The Weekend Edition
Next Post

April 19, 2021 Things Keeping Us Going: Vaccinated Edition
Recent Comments
0 | Leave a Comment
"https://www.youtube.com/wat..."
Theodore Seeber How Blogs Hurt (and Help) the ..."
"I agree with Jacobs. Our writer could have bowed to the altar in the Episcopalian ..."
edlondinium Dark Devotional: The Case of the ..."
"Oh dear. Shades of Pascal's wager. What I choose to do with my life is ..."
Linguagroover Dark Devotional: On the Outside with ..."
"A serious study of Catholicism will show that Jesus' Gospel message was and is a ..."
Jo Ann Elder-Nativity Dark Devotional: On the Outside with ..."
Browse Our Archives
get the latest from
Sick Pilgrim
Sign up for our newsletter
POPULAR AT PATHEOS Catholic
1