We are Blood Thirsty: Twilight, Fifty Shades, and Leviticus

Editor’s Note:This post discusses ritualistic cutting and self-injury in the context of a theology of blood. If you or someone you love practices non-suicidal self-injury to relieve emotional pain, more information and resources are available here.

More than half of girls aged 10-14 and one in five aged 10-18 ritualistically bleed themselves through cutting practices they say “make them feel alive” as they silently “cry tears of blood” that “relieve the pain.”

I called a friend who habitually cut herself,  participating in ritual cutting with others as a teenager. She said she had an affinity for cutting, according to her experiences and circle of friends, because “blood is more intimate than sex, because life is in the blood.”

I suggested that sex is naturally ordered toward life. So life is “in” sex too, unless there is contraception or some other sterile union. Birth involves blood and life as well. Violently so.

My friend was surprised to learn that her remark “life is in the blood” is a direct quote from Leviticus 17:11-14 (“the life of a thing is in its blood”). She answered that blood is more intimate than sex, because you never share your blood with others–unless you’re hurt.

Everyone has sex, nowadays, and it means nothing, she said, going on to express that in sharing blood with another, you are part of that person and their pain, and they are part of you. There is unity.

“Human to human, blood to blood,” she said.

I found it interesting that she spoke of life, blood and sacrifice in the same context. Her view seems to echo our cultural fascination with books like Twilight and Fifty Shades. (The latter series began as fan fiction, inspired by the former.) In both sets of books, the heroines are virgins before they become sexually involved with the main male characters. Both Edward and Christian Gray draw their blood in other ways, fictional attempts to take the blood relationship even further, make it deeper.

What if this vampiric obsession shares roots with self-cutting practices, and even the Eucharist? What if similar attempts at personal communion through blood are inherently and unconsciously driven by a sort of divine imprint on the soul? What if that longing exists because the sacred exchange of blood was God’s idea from the beginning of time?

What if it all goes back to Leviticus?

Theologians explain that a contract is simply a legal agreement, whereas a biblical covenant, like the Sacrament of Matrimony, is a complete self-donation, a sacrificial exchange of persons. Since a female usually bleeds in her first sexual encounter, whether the woman acknowledged it or not, her blood was a sign that marked the couple’s first intimate encounter as a permanent blood covenant. Through that encounter, and every one afterward, the husband transmits the seed of life, and she potentially carries and nurtures that union unto new life, sacrificially giving birth to the union again, in blood and pain.

The Bible is full of such sacrificial blood covenants. Not because God loves gore and death, but because blood is holy.

If the life of a thing is in its blood, then blood is particularly God’s, since it is God who gives every living thing its life.

After Adam and Eve sinned, they hid from God under fig leaves in sudden shame for their nakedness. God then provided animal skins for them to wear. Maybe that sacrifice of animal blood also signified, from the earliest moments in human history, God’s permanent commitment to humanity even–maybe even especially–in its sin. Perhaps that first animal sacrifice was God preparing us for an even deeper reality.

In the Old Testament, blood was particularly holy and never to be presumptuously touched. God enacted a strict prohibition against eating or drinking blood upon pain of death (Lev. 17:11-14). The prohibition makes blood seem dirty, but in fact, in Jewish thought, anything holy had connotations similar to that of radioactivity. If you get holiness “on you” and you’re not holy yourself, it will hurt you somehow.

As I explore in chapter three of Unleashed, women experiencing their monthly flow of blood were considered unclean for this reason (Lev. 15:19-28)–a Levitical mandate that had personally offended me, since that joyful feminine experience is hardly my fault. Then I made the connection of that monthly flow of blood with the ability to sacrificially bring new life into the world. God-as-Life-Giver made the prohibitions to set woman apart as uniquely holy.

Honestly? That realization changed the way I saw my own blood.

Blood to Blood, Life to Life

Part of why the Old Testament seems so brutal is because of all the bloody animal sacrifices God required. Those sacrifices illustrated the brutality of sin. Sin introduces death and leeches away life – a quality of life we can barely imagine or experience yet.

Each Old Testament sacrifice foreshadowed the one Super Sacrifice of the Blood of Christ, required to atone for human sin. Only an eternal sacrifice could atone for an immortal soul. Jesus shared our blood and our pain. He gives us His eternal-life seed through His pain and His blood. “Human to human, blood to blood.”

And yet, the cross didn’t end the life-blood connection. The Old Testament prohibited the drinking of blood, but Jesus requires we do so for eternal life: “Truly, truly, I say to you, unless you eat the flesh of the Son of man and drink his blood, you have no life in you; he who eats my flesh and drinks my blood has eternal life” (Joh 6:53-54). Lest we misunderstand and think He is speaking symbolically, he uses the literal Greek word for gnawing.

If you’re offended or disgusted by Jesus’ gory literalism, well, you’re not the first: “After this [saying], many of his disciples drew back and no longer went about with him” (John 6:66).

The Mass is a true sacrifice because it is the same Jesus present, body and blood, pouring Himself out for our sins. In doing so He is not redeeming us again – He did that already on the Cross – but He offers Himself in Eucharistic Communion to transmit His divine life to us through His sacrificial body and blood.

When He says, “This is the cup of the new covenant in my blood that is poured out for you for the forgiveness of sins,” He uses the same word the Old Testament used for the pouring out of sacrificial blood in the tabernacle and covenant sacrifices. To eat and drink the blood of those sacrifices would have been to drink unto death, so God enacted a protective prohibition against such. And yet Jesus, who came to give us life, made eating His flesh and drinking His blood the whole point of the New Covenant, because His sacrificial, resurrected, eternal life is literally and uniquely present there.

No wonder we thirst for blood–longing for human connection through blood is imprinted on the soul.When unfulfilled, this longing displays itself in other bloody, painful ways. But only Jesus satiates the world’s primal need for the blood-giving, life-demands we read about in Leviticus.

I remember this now when I think of Twilight, of Vampires, of S&M, and even of cutting. I remember it when I receive Him in the Eucharist. I’m meant to go forth and be broken and spilled out–through Him, in Him, and with Him–in every precious encounter: human to human, life to life. 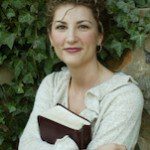 Sonja Corbitt is the Bible Study Evangelista, a Catholic Scripture teacher and author of Unleashed, Fearless, and Ignite (summer 2017 with Deacon Harold Burke-Sivers). She hosts a weekly radio show on Breadbox Media, and you can catch her newest audio study series on understanding the Old Testament here. What’s an “evangelista” anyway? Find out at biblestudyevangelista.com. 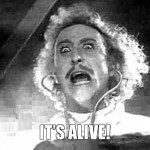 October 28, 2016 Dark Devotional: The Terror of the Saintly Call
Recent Comments
0 | Leave a Comment
Browse Our Archives
Follow Us!