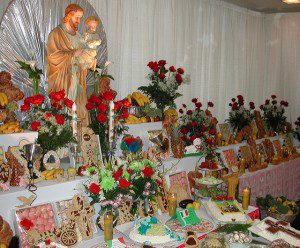 Every year in my school, the classes would take a bus to a nearby banquet hall in our town of Opelousas, where we’d be able to eat some of the great food prepared for the St. Joseph’s Altar, a practice especially popular in Catholic southern Louisiana. That “altar” was really just a few tables adorned with flowers, breads, desserts, and meatless meals to commemorate the Solemnity of St. Joseph.

Since the Solemnity falls during Lent most years and is not technically a Feast Day, the rules of the Lenten fasting still apply, and that includes no meat. Meatless meals, which don’t include seafood (or beaver-meat, because Catholicism is weird; seriously), are hardly a fast in the seafood-loving Cajun areas of Louisiana. The table was lined with delicacies like seafood gumbo, crawfish fettuccine, and spaghetti with boiled eggs instead of meatballs.

After everyone finished eating, we each received a St. Joseph prayer card with a dry fava bean glued to it. They told us that the beans had been blessed by a priest. So each year, I was able to go to a St. Joseph’s Altar, held during the fasting season of Lent, feast on seafood and non-meat dishes, breads, and desserts to my stomach’s content, and leave with a holy bean.

Because Catholicism is weird.

I only recently understood all the weird rituals that accompany Saint Joseph’s Altars. The practice originated in Sicily in the Middle Ages, where legend tells of a great and life-threatening drought that persisted for years. The people prayed for the intercession of their patron, Saint Joseph, and afterwards the rains came, saving their lives. To thank their patron, the Sicilians erected a huge table adorned with foods they made from the harvest, ate their fill, and donated the rest to the needy. The fava bean, believed to have saved the people from starving, became a symbol reminding those who carry them that God will provide their essentials.

This celebration is one of contradictions. A banquet during a fast; seafood delicacies as a sacrifice from meat; thanksgiving for a story that may or may not have happened; a dried bean to keep in my pocket to remind me that my essentials will always be provided, while our yellow bus passed beggars sitting on the curb on the way back to school. In a way, that’s what faith is. Maybe that’s why out of the 80 students who graduated alongside me from my Catholic school, maybe 20 identify as Catholic, 14 years after graduating.

Contradictions are inescapable for me. I am one. A working mind in a genetically anomalous body; thinking faster than my body responds.

My faith tells me to believe in a God who heals and works miracles, while I remain in a wheelchair.

But as I’ve found, Catholicism doesn’t run from contradictions. Bread and wine becomes the Body and Blood of Christ, though no physical change occurs. We believe in the authority of a Church of losers.

We celebrate around a table with meatless meals and take from it blessed beans that we carry in our pockets.

Because Catholicism is weird.

be with us this day.
You protected and cherished the Virgin;
loving the Child Jesus as your Son,
you rescued Him from the danger of death.
Defend the Church,
the household of God,
purchased by the Blood of Christ.

Guardian of the Holy Family,
be with us in our trials.
May your prayers obtain for us
the strength to flee from error
and wrestle with the powers of corruption
so that in life we may grow in holiness
and in death rejoice in the crown of victory. 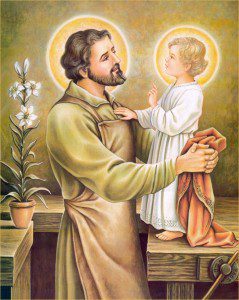 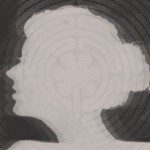 March 24, 2017 Dark Devotional: Faith and Doubt in the Labyrinth
Recent Comments
0 | Leave a Comment
"https://www.youtube.com/wat..."
Theodore Seeber How Blogs Hurt (and Help) the ..."
"I agree with Jacobs. Our writer could have bowed to the altar in the Episcopalian ..."
edlondinium Dark Devotional: The Case of the ..."
"Oh dear. Shades of Pascal's wager. What I choose to do with my life is ..."
Linguagroover Dark Devotional: On the Outside with ..."
"A serious study of Catholicism will show that Jesus' Gospel message was and is a ..."
Jo Ann Elder-Nativity Dark Devotional: On the Outside with ..."
Browse Our Archives
get the latest updates from
Sick Pilgrim
and the Patheos
Catholic
Channel
POPULAR AT PATHEOS Catholic
1