I had walked since dawn and lay down to rest on a bare hillside Above the ocean. I saw through half-shut eyelids a vulture wheeling high up in heaven,
And presently it passed again, but lower and nearer, its orbit narrowing,
I understood then
That I was under inspection. I lay death-still and heard the flight- feathers
Whistle above me and make their circle and come nearer.
I could see the naked red head between the great wings
bear downward staring. I said, “My dear bird, we are wasting time here.
These old bones will still work; they are not for you.” But how beautiful
he looked, gliding down
on those great sails; how beautiful he looked, veering away in the sea-light
over the precipice. I tell you solemnly
hat I was sorry to have disappointed him. To be eaten by that beak and
become part of him, to share those wings and those eyes–
What a sublime end of one’s body, what and enskyment; what a life after death

All morning the waking dream bubbles in the root cellar in the soul’s dark basement, then rises up while I watch the sky, the river birds slicing upstream in search of bugs just hatching, their wings wet, barely able to lift off, and suddenly, my mind pivots on the image of those bugs taking off, and I think of their tiny bodies, existing perfectly, without sin, rising only for an instant of their unimaginably short life, taken, mid-flight, into the beaks of the hungry, then, my mind makes that leaping turn again into the memory of myself as boy, his face inches from an old black and white screen in the 50’s, pulled in by the sharp edge of Bishop Fulton J. Sheen’s probing voice, the notion of sin barely growing in me, like a vine I knew was there, but not tended enough to realize the fruit it would bear, and Fulton his voice a staccato, rasping thing that went down inside me to find any thing worthy of his attention, but now, right now, on the river, my head dancing between images and memories, he comes sliding on the sky downriver, directly at me, lifts me onto his back, his black cape furling him into vulture, and we head straight up, his voice somehow cupping around my ears, and I do what I do every time I feel the ancient fear of being one of God’s lost flock, whispering the 23rd Psalm to myself, the Bishop and I circling over an ocean, where we circle and turn over an empty, rocky coastline, and I worry back into his ear that we are lost, that God has abandoned us to a place with no map, and then Sheen reminds me that the map is not the territory…he scours the earth for sin, prowls, drags the air for it, confesses his delight in being a carrion bird of prey, dropping down on the dead, his ancient beak catching that dark smoke of their burning souls before it rises heavenward, then we bank off, his belly full of human transgressions, and I think of myself, riding on his huge back, full of sloth and pride, gluttony and anger, and the buckets of lust I carry in my own belly, yet Sheen whispers again that he knows that Jesus is waiting at the gate of the border into the Kingdom, which is nearby, it seems, and Jesus appears suddenly, somehow below us, around us, in us, his arms raised to call us down, and I remember reading as a child his words in the Gospel:

“I am the gate. Whoever enters through me will be saved.”

Not just any gate, but THE gate. “I am the gate” He repeats, chant-like, His body dissolving into swinging gold, and we pass through and into and become the air, become the place itself, sweet, overflowing cups everywhere, Sheen spreading a picnic blanket in a pasture green and vast beyond any imagination, both of our cleansed, absolved bodies eating beside still water, no shadow of death anywhere to be seen.

Michael Delp is a poet and a river demigod who enjoys catching old episodes of Fulton Sheen’s Life is Worth Living on the radio in the wilds of Northern Michigan. His most recent book is Lying in the River’s Dark Bed. 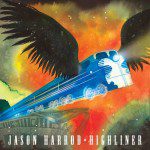 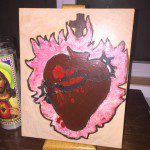 May 8, 2017 The Theology of Suffering Questions the Benedict Option
Recent Comments
0 | Leave a Comment
"https://www.youtube.com/wat..."
Theodore Seeber How Blogs Hurt (and Help) the ..."
"I agree with Jacobs. Our writer could have bowed to the altar in the Episcopalian ..."
edlondinium Dark Devotional: The Case of the ..."
"Oh dear. Shades of Pascal's wager. What I choose to do with my life is ..."
Linguagroover Dark Devotional: On the Outside with ..."
"A serious study of Catholicism will show that Jesus' Gospel message was and is a ..."
Jo Ann Elder-Nativity Dark Devotional: On the Outside with ..."
Browse Our Archives
Related posts from Sick Pilgrim