St. Maximilian Kolbe, Pray for Me, a Sinner, and a White Man. 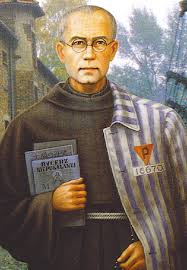 I’m a white male, age 35-45. According to all statistics and research, I have power in America. It’s not something I asked for or wanted.  At first glance, nothing about my life screams prestige or influence. I come from a teenage union, my parents picking soybeans in an Indiana field just so I could eat. Not exactly a life of ease and leisure with summers at Martha’s Vineyard and an Ivy League education.

No, I have power because I was born with light skin and a penis.

For a while, I used my personal narrative as way to deny I had any sort of influence. I got defensive when people said I had a privileged position. But I listened to the experiences of my minority friends and the women in my life. I heard their stories and they pushed me to look closer. I saw how they were treated. I watched when I went into a suburban store with an African American man, a strong and respected leader in his own community. But in this area full of white people, he received looks of fear and suspicion. I didn’t see any other reason for this except for the color of skin. I’ve watched and listened to men put down the amazing and intelligent women in my life. They spoke over them, belittled their opinions or told them they were crazy.

Thing is, I’ve always liked to tell myself that I didn’t do these things, that I was not racist or that I respected women. I’ve tried all my life not to do these sort of terrible things.  At least, I think I did, but I’ve come to doubt that in the past few years. As I contemplate the events of Charlottesville on the feast day (August 14th) of St. Maximilian Kolbe, I’ve realized that my half-ass measures of “not doing” bad things wasn’t enough. While refraining from doing evil made me look good on a superficial level, it really did nothing for my women and minority friends. Indeed, in many ways, it made the problem worse.

St. Maximilian was imprisioned by the Nazis when he refused to acknowledge his so-called racial purity and therefore gain German citizenship and safety. He rejected his white privilege and chose to be numbered among the oppressed. And yet, he knew that he had power as a white male and used it to fight evil, publishing anti-Nazi propaganda until his arrest.

He found himself in Auschwitz and offered himself up in the place of a total stranger who had a wife and children. The racist white nationalists sentenced him to death by starvation. Finally losing patience, they killed him with a lethal injection.

His example and story strikes at my heart. It tells me that it is not enough to stand in a corner and “tsk” at evil. Refusing the power I’ve been given as a white man is giving my assent to evil, even if I don’t actually participate in it. If I ignore the racists who marched in Virginia, it means I agree with them in my heart.

My fellow white Christian brothers. I charge you to examine yourselves. No one, no one in their right mind anyway, is asking you to apologize for being white. No one is asking you to say it’s bad you have a penis. These are biological facts determined long before we were born.

What our minority brothers and sisters, our LGBTQ friends, and the women in our lives are asking is that we use our power to stand for their basic rights to live. Because we do have power in this country, and it is a unique power. It’s a demonstrable fact. White men get better jobs, better pay and have an overall better standard of life. People take us seriously, even when, perhaps, they shouldn’t. No one is asking us to apologize for those circumstances which are the luck of life and the Providence of God. But, what they are asking is that we use that power for good and not evil.

How do we do this? We embrace Jesus’ words in the Sermon on the Mount and become poor in spirit, spirit beggars. We listen. We learn. And then we use what we learn to stand for those who have less power or can’t stand for themselves.  You don’t have to agree with everything they say. You don’t have to give assent to things that bother you.

But what you must do, as white men who supposedly bow the knee to Christ, is to be identified with the weak and the oppressed, to smash the teeth of the oppressor and to speak for those who may not be able to speak for themselves. And if called to do so, you must give up your life (either literally or figuratively) for total strangers so that the love of Christ can be shown to the world.

This is not easy. Pride is our enemy, and it’s a deadly one. We all have our own reasons for thinking we are right and getting defensive.  Many of us have hurts, wounds and disappointments that make us want to lash out and blame others. But a strong man, a man centered on Christ, a man like St. Maximilian Kolbe, will face his own spiritual poverty and the need to be transformed by Christ. This sort of man will face down his own weaknesses, embrace them and let them become his true power. I know that If I do anything less, I’m not a faithful Catholic and Christian. If I fail to speak up, stand and use my power for good, my claims to know Christ are hypocrisy and worthy of scorn.

Here’s a prayer to help you:

St. Maximilian Kolbe, pray for us white men. Pray that we humble ourselves and stand with power for the voiceless. And even more importantly, that we may fight and oppose those who would demean and strip the oppressed of their humanity, like the white racists tried to do in Charlottesville.

As the Blessed Mother said in her song of praise,

He has mercy on those who fear him
in every generation.
He has shown the strength of his arm,
he has scattered the proud in their conceit.

He has cast down the mighty from their thrones,
and has lifted up the lowly.
He has filled the hungry with good things,
and the rich he has sent away empty. 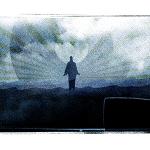 August 12, 2017
Dark Devotional: Who Will You Call When You're Drowning?
Next Post 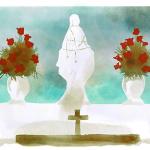 August 15, 2017 The Cajun Saint and The Cajun Doubter: Charlene Richard and Me
Recent Comments
0 | Leave a Comment
Browse Our Archives
Related posts from Sick Pilgrim