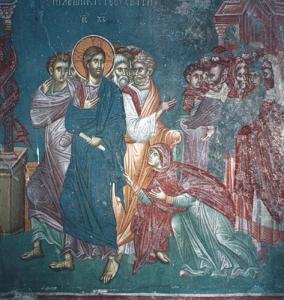 When two friends told me that not only was the Bleeding Woman their favorite story in Grit and Grace, a book of “creatively re-imagined” Bible stories I wrote for tween-age girls, but that they cried while reading it, I chalked it up to their being women of a certain age and, well, perimenopausal.

After all, I’ve heard enough stories from my older friends about periods gone wild as menopause sets in that I figured these two had spent much time swearing off white pants and begging sweet Jesus for relief from a heavy flow, They got the Bleeding Woman.

But then two other younger women, women still very much in the throes of birthing and nursing babies and living into the full fierceness of the female body told me that Bleedy was their favorite story. And then yet another woman–a stranger–messaged me to share how the Bleeding Woman’s story “did something” for her spirit.

Only then did I realize that perhaps hormones weren’t driving Fangirldom for the Bleeding Woman. In fact, the Fangirldom probably wasn’t for her at all.

I mean: the Bleeding Woman’s celebrated faith did drive her to press through the crowd, blood running down her legs, staining her robes, disgusting and infecting everyone she passed with uncleanness. She knew Jesus would heal her. That’s why she’s awesome.

But Jesus. Jesus. Oh, Jesus. He did something so much more than just heal her. Jesus did more than make her “clean” and restore her to public life. Jesus gave her more than an opportunity–perhaps–to bear children and restore (ancient Hebrew-woman) purpose to her life.

Jesus did something far better. Jesus didn’t shudder. He didn’t point and laugh. He didn’t inch away. When Jesus reached out to the Bleeding Woman, Jesus liberated her.

And Jesus liberated all of us.

While we burden ourselves with having to conceal the “shames” of being a woman–the bleeding, the peeing-while-sneezing, the leaky boobs while nursing, the sagging–Jesus calls it out in a crowd and honors it.

The Scriptures tell us that when Jesus asks who touched him, “In the presence of all the people, she told why…” (Luke 8:47). The Bleeding Woman told Jesus that she had bled (meaning, blood running from her uterus through her vagina, into her undergarments, overflowing whatever rudimentary “pads” they used for 12 years) in front of everyone.

I’m often still embarrassed to toss tampons on the belt at the grocery store when there’s a man-child cashier. This woman shared her gynecological trouble in front of the gossips, the grossed-out, the everyone.

She shared her shame–full, naked, bloody shame–to Jesus and know what he says?

“Daughter, your faith has healed you. Go in peace.”

In other words, while the crowd clutches their pearls and gags, when everyone assumed Jesus would lash out for daring to make him unclean with her bloody girl-part germs, Jesus–amazed by her faith– leans in, praises her faith, and then essentially says, “It’s cool.”

When was the last time women heard that about our troublesome bodies and humiliating bodily functions?

Leave it to Jesus to be the one. To say it then. And to say it to us now.

But Jesus. Jesus. Oh, Jesus. Giving us yet another of the most Girl Powery Girl Power stories of all time. (A friend handily noted there’s no male equivalent to this. We don’t ever read of Jesus healing men with erectile dysfunction.)

This is a story about a woman for women–and girls–of all ages. From girls stressing about their first periods to nursing moms covering their leaky boobs in a meeting to middle-aged woman breaking into a sweat standing still to elder women navigating a new normal for sex, Jesus says, Ignore those who giggle. Forget those who are repulsed. It’s cool. No need to hide. No need for shame. 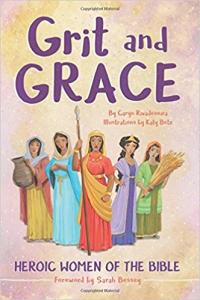 Caryn Rivadeneira is the author of seven books, including her latest, Grit and Grace: Heroic Women of the Bible (Sparkhouse Family, 2017). Caryn lives in the near-west suburbs of Chicago with her husband, three kids, and rescued pit bull. 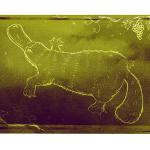 October 6, 2017
Dark Devotional: In Praise of the Wild Grapes
Next Post 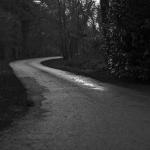 October 12, 2017 Approaching Mystery: Marie Kopp Travels Those Haunted Appalachian Roads
Recent Comments
0 | Leave a Comment
"https://www.youtube.com/wat..."
Theodore Seeber How Blogs Hurt (and Help) the ..."
"I agree with Jacobs. Our writer could have bowed to the altar in the Episcopalian ..."
edlondinium Dark Devotional: The Case of the ..."
"Oh dear. Shades of Pascal's wager. What I choose to do with my life is ..."
Linguagroover Dark Devotional: On the Outside with ..."
"A serious study of Catholicism will show that Jesus' Gospel message was and is a ..."
Jo Ann Elder-Nativity Dark Devotional: On the Outside with ..."
Browse Our Archives
get the latest updates from
Sick Pilgrim
and the Patheos
Catholic
Channel
POPULAR AT PATHEOS Catholic
1