Christmas at War: A Dark Devotional

As I read and meditated on this Sunday’s readings, I couldn’t get a question out of my mind. If the theme is that Jesus is the descendant of King David and fulfills the promises made by God to his chosen people, then why insert the conclusion of the Letter to the Romans.

After dwelling on the question for some time I came to the conclusion that the keyword for understanding this choice is “wisdom.”

St. Paul speaks of wisdom more than any other New Testament author. Paul believes that God has revealed his plan for creation and has chosen him to bring all men to understand it. That’s why Paul sees that the conversion of those who hear him is only the beginning. He cannot rest until he has brought his spiritual sons and daughters into the full understanding of the mystery that Jesus has revealed to him (Col 1:9-10).

For some time, I thought St. Paul was a sort of hidden meta-physician, a person who was eager to obtain a true and grounded knowledge of God that could be valid for everyone. But he’s not. He made this very clear when he wrote this:

The message of the cross is foolishness to those who are perishing, but to us who are being saved it is the power of God. For it is written: “I will destroy the wisdom of the wise, and the learning of the learned I will set aside.”

I’m convinced that years of preaching and sermons have made this concept rather vacuous, so I’ll try to present it in another way.

The tradition of Orthodox Christianity has produced splendid icons full of theological meanings of unsurpassable value. The icon of the Nativity is especially important because it presents a fundamental detail: the Child Jesus is not in a stable, but in a dark cave that resembles a sepulcher; he’s not placed in a manger but in a sarcophagus, and he’s surrounded by what appears to be a funeral shroud. He’s presented as a corpse. The corpse of a newborn baby. We celebrate the birth of a King who is a victim, designated to suffer and atone for his people. Not exactly what we call Christmas spirit.

Now let that image sink in for a while. 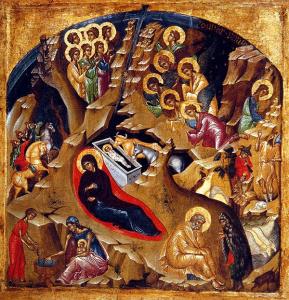 What’s happening inside you? How do you feel? Do you find comfort in the fact that God had to reveal merciful love through the death of Christ? Do you feel some kind of desolation, knowing that God’s love surpasses all possibility of human understanding? The truth is that only through the transformation of our hearts by the love poured into them by the Holy Spirit can we even begin to comprehend (and yeah, that’s not the same thing as understanding).

But at Christmas, it’s essential that we remember there is no other way: we need to become other Christs. Then we will see the goodness of the Lord. But this process is not easy. Love grows in us, like a sickness, like a tumor, extending its roots into the deepest, darkest corners of our hearts, changing us, making us what we don’t want to be, because it’s the nature of love to kill the self to make space for the Other.

In these days we talk about the War on Christmas, but the truth is to the contrary.  The truth is that Christmas begins a war in you, as painful as labor, because Christ must be born in you.

Andrea Ciceri is a RPG and video game geek who also happens to have a PhD in Philosophy of Religion. Married, father of one son, he loves to cook for his family and friends. He is the proud owner of his family bookshop in Italy. 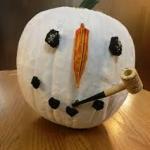 December 15, 2017
The Great Pumpkin of Advent, a Dark Devotional
Next Post

December 25, 2017 Christmas: It's Complicated
Recent Comments
0 | Leave a Comment
"https://www.youtube.com/wat..."
Theodore Seeber How Blogs Hurt (and Help) the ..."
"I agree with Jacobs. Our writer could have bowed to the altar in the Episcopalian ..."
edlondinium Dark Devotional: The Case of the ..."
"Oh dear. Shades of Pascal's wager. What I choose to do with my life is ..."
Linguagroover Dark Devotional: On the Outside with ..."
"A serious study of Catholicism will show that Jesus' Gospel message was and is a ..."
Jo Ann Elder-Nativity Dark Devotional: On the Outside with ..."
Browse Our Archives
get the latest from
Sick Pilgrim
Sign up for our newsletter
POPULAR AT PATHEOS Catholic
1

Facing this Election, We Must Recall...
suspended in her jar
Related posts from Sick Pilgrim