One Body: A Mother Reads the Creation Narrative

The last time I sat down to write a Dark Devotional, a meditation on the Bread of Life discourse and my experience with the Eucharist, it turned out to be only a couple days before the release of the Pennsylvania Grand Jury Report. The gruesome report, detailing allegations of sexual assault against 1,000 minors by 300 priests, along with the arguably systematic coverups of the crimes by bishops, immediately threw my relationship to the Church hierarchy into crisis, and has shaken my identity to its core. Overlaying the scandal is the open wound for many women in the church. We whisper among ourselves (sometimes daring to speak above a whisper), “Could things have been different if women had more influential roles in the church? Could we have demanded more accountability?” We speak of these things with a kind of dejection, hearing the same explanations issued, watching the same leadership dig in its heels.

Couple that with the fact that the news cycle has continued. Amidst unrest in our Church, there is unrest in our nation. Thousands of us watched and listened as Dr. Christine Blasey Ford testified in front of the Senate only days ago. While most, if not all, senators signalled that they found Ford’s narrative credible and convincing, most of those same senators (from a certain side of the aisle) nevertheless wish to push Judge Brett Kavanaugh’s Supreme Court nomination forward.

You can forgive me, then, if I didn’t shout in exultation when I opened my devotional to the lectionary readings for October 7 and saw the story of woman’s creation in Genesis.

So the Lord God cast a deep sleep on the man, and while he was asleep, he took out one of his ribs and closed up its place with flesh. The Lord God then built up into a woman the rib that he had taken from the man. When he brought her to the man, the man said, “This one, at last, is bone of my bones and flesh of my flesh; this one shall be called ‘woman,’ for out of ‘her man’ this one has been taken.”

This passage remains a stumbling block to so many of us women in the church. From one corner of its mouth, our beloved church tells us we are equal in dignity, in being, in salvation, with any man. One of our own is even called “full of grace!” Yet we also know our history. We know of the prime theologian in our Catholic tradition, Thomas Aquinas, writing about our “inferior intellective faculties;” we know that according to the writings of most Church Fathers, we are an “occasion of sin.” And certainly we know how quiet our voices can sound in a tradition that cannot and will not allow us into the official corpus of the magisterial teachings of the Catholic Church.

Meditating on this piece of Scripture can pour salt on all the open wounds, bones, and flesh.

And yet . . . and yet. Some showering of grace allows me to read this passage with new eyes this time around. Even given all of the above, “bone of my bones and flesh of my flesh” means something new to me today.

Before I got out of bed yesterday, long before I read the Genesis passage, my four year old son climbed into bed with me and asked if he could snuggle. It was a Saturday–blessedly, there was time to snuggle. He mentioned something about how it must have been scary to live all alone inside my womb, how dark and lonely it must have been. And while I acknowledged the point, I drew him closer to me and thought, “No! You are flesh of my flesh and bone of my bones! You were never alone, little one. You have been surrounded by love forever.”

And I remembered that insight I had received during my first pregnancy, with his older sister. I remembered standing, waiting for the elevator, feeling utterly nauseous, yet marveling at the fact that I was now both self and other. Mother and the baby share certain vital organs as the baby grows. If I am my body, including all my organs, that means that there is a time when I am no longer only one, but two. And even after that baby leaves my womb, beginning that process of individuation, it is still a process. We gradually become one, rather than two, again. Yet we are made of one another. There is no you without me, now no me without you.

Paul seems to say something similar in our second reading today. Speaking of Jesus, Paul affirms:

He who consecrates and those who are being consecrated all have one origin. Therefore, he is not ashamed to call them “brothers.”

We have one origin, one divine parentage: through Christ, there is no longer “Gentile or Jew, servant or free, woman or man.” We have one source, and we belong to one another.

So this weekend, I look at the Genesis passage with a more generous eye, thinking more of my son than Aquinas, my anthropological challenger. It is not only woman who is a part of man. We are one body, each one vulnerable, each birthed to life by the flesh and the sacrifice of a woman. Consecrated with one origin, belonging to one another.

Holly Mohr lives and works in Pittsburgh, PA with her husband, Eric, and two children. She wrestles with T/tradition in love and consternation. 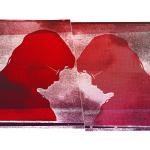 October 8, 2018 Women Watch the Witch While Kavanaugh is Confirmed
Recent Comments
0 | Leave a Comment
Browse Our Archives
Follow Us!

Official Catholic Church Teaching on the...
The Shoeless Banshee: Meanderings Beyond the Pale
Related posts from Sick Pilgrim