I like digging holes, hiding things inside them.
When I grow old I hope I won’t forget to find them.

I’ve got no roots, but my home was never on the ground.

I used to think I was Irish, but that was stripped away when I was an adult.

A relative did some digging through documents and on ancestry.com. It turned out that what we thought was Irish ancestry, wasn’t.

As a kid my Irish heritage had been celebrated in the most common of ways—eating stuffed cabbage on St. Patrick’s Day, wearing green, adults drinking green beer at one point, but I don’t think it was a staple. I remember looking forward to Shamrock shakes, but that wasn’t particular to the Irish; anyone who likes refined sugar and pooping green likes Shamrock shakes.

Still, the loss of my heritage felt real. I had dreams of visiting my motherland, perhaps finding long-lost second- or third-cousins, seeing where “my people” were really from, breathing the same air, dining in the same pubs. Now, if I go to Ireland at all, I can only call myself a tourist.

Can I save anything from my past, bury it in a hole to find later? Or will I always be a sham if I eat corned beef and cabbage?

In his book In the Shelter, Irish poet and storyteller Pádraig O’Tuama asks, “How do you negotiate the recalibration of your national identity? With friends, discussion, good food, politics, argument and commitment. I know of no other way…It’s as if the right answer to the question ‘What country are you from?’ is ‘Well, let me tell you a story.’”

It’s useful to note, when speaking of reshaping identity, that St. Patrick wasn’t Irish either. He was taken to Ireland as a captive and fell in love with the people. He returned there as a priest and used the traditions of the land to help the people understand the love of God, rather than stamping out local customs and trying to replace them with his own. Perhaps the best way for a non-native Irish person to be Irish is to enter with respect, ears and eyes open, to hear the stories and to add to rather than stamp out.

I also used to think of myself as Catholic.

Unlike my Irish identity, no one came forward with papers to show me this perception was false.

This came gradually, stripped away little by little, as one revelation of abuse after another came forward, as the hypocrisy of years of withholding birth control and women’s ordination, and the judgment of LGBT individuals became more apparent.

It has left me feeling more uprooted than losing my Irish identity. How do you live and move and have your being in the world when the framework has become unnailed? But unlike my un-Irishing, which came with papers and proof, I don’t know who I am without being Catholic. It wasn’t replaced by something else.

Turning to story as O’Tuama suggests, I recall a part in Mary Doria Russell’s Children of God, in which two wise characters debate the nature of religion:

“They agreed on many things during those midnight conversations. There was, they decided, no such thing as an ex-Jew or an ex-Catholic or an ex-Marine. “Now why is that?” D.W. asked one night, after noting that ex-Texans were hard to come by, too. It was, he thought, crucial to get at your recruits when they were young and impressionable. Pride in tradition was part of it as well, Sofia pointed out. But most important, D.W. said, was the fact that all these groups based their philosophies on the same principle.

“Talk is cheap. We believe in action,” Yarbrough said. “Fight for justice. Feed the hungry. Take the beach. We none of us sit around hopin’ for some big damn miracle to fix things.”

So if part of me will always be Catholic (and I believe Russell-through-Yarbrough is right in this), I have begun snatching and burying bits of my faith that I want to retain through all the bullshit. Pieces of my self that can’t be taken away…the sacraments, the rosary, the saints. I will bury them and find them as needed, stowing them away from the prying eyes that will tell me I’m “doing it wrong,” from those who will try to claim I’m a sham Catholic.

I won’t sit around waiting for some big damn miracle, not from God and not from a summit of bishops. If, as Alice Merton sings, my home was never on the ground anyway, perhaps something new can grow from the buried treasures of faith and identity. I will keep the sacraments, hold close Christ’s promises, keep the love of God above all else and the love of neighbor as self—and leave the hypocrisy and patriarchy out of it this time. We’ll see what grows in the spring.

This week’s Dark Devotional was submitted by an anonymous contributor. 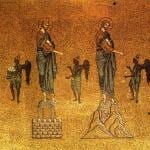 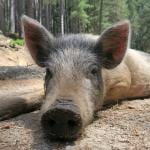 March 20, 2019 Dark Devotional: Squandering Our Inheritance
Recent Comments
0 | Leave a Comment
Browse Our Archives
get the latest from
Sick Pilgrim
Sign up for our newsletter
POPULAR AT PATHEOS Catholic
1