Iconoclasm and Misogyny at the Amazonian Synod 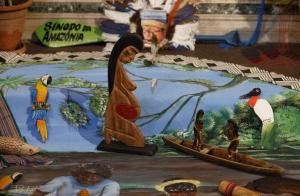 Yesterday, as the Amazonian Synod in Rome comes to an end, it was reported that a statue that symbolized the Synod (Our Lady of the Amazon) was stolen and thrown into the Tiber River. Some celebrated (which was gross). Some were dismayed and cried “racism” and “iconoclasm” (which was correct). Henry Karlson had a particularly nice discussion of iconoclasm over at his blog this morning.

The Amazonian Synod was controversial before it even began. It was known that the question of married priests was going to be discussed. Catholicism in the Amazon is not particularly sustainable as is. There are so few priests that the Mass is not accessible. Protestant Churches, particularly evangelical churches, are much more available. If a Catholic wants to participate in a service that worships God and celebrates Christ, their only option is often to attend a Protestant church. Amazonian Catholics often become Protestant by default because Protestant Christianity is local and Catholicism isn’t. Allowing married men to be ordained offers perhaps the most practical solution to this problem, but this is a break from Catholic norms and there was wide objection to this possible change.

After the Synod opened, it continued to be controversial. Amazonian imagery dominated (for obvious reasons) and care of the earth emerged as a major theme (also for obvious reasons). Discussions and documents used the phrase “Mother Earth” in a serious way, leading to the objection that the Synod was invoking an Amazonian goddess. In addition, the role of women has turned out to be a major theme of the Synod. Women religious have spoken about their role in hearing confessions and ministering to the dying. While they don’t claim that their ministrations are the same as that of a priest administering the sacraments, the fact remains that they are performing roles that are often reserved for the clergy. In recognition of this, the question of women deacons is again under discussion.

One indigenous representative, Anitalia Pijachi, who addressed the bishops with a message from her elders said,

“I believe it is very important that the synod give women a place in decision making, the autonomy to act…. I reminded the men that they do not have to be afraid of us…. The only way a man can be born is if he comes from a woman. Before he saw the light of day, he was born through a woman’s vagina. So why, after I gave him life, I who am his mother, why does he reject me and send me off to a corner?”

What is astonishing about this Synod is that there is a startling new kind of evangelization at play. We are used to thinking about evangelization as imposition. We, Catholics or Christians, go to a place where people don’t know about Christ and the Church and we tell them how it is. We are right. They are wrong and must be corrected. Full stop. With the Amazonian Synod, indigenous people are telling the Church about their experience, their culture, and their lived realities – and the Church seems to be listening and showing signs that it may change in response.

Of course some Catholics are reacting badly. It’s a different model of evangelization. It’s a model that makes the Church open to being itself evangelized. It’s a model that is de-colonialist, that has the potential to center indigenous people and women.* It provokes hostility because it challenges habits of racism, colonialism, and misogyny that are, unfortunately, so deeply ingrained that Catholics don’t even notice them most of the time.

For example, I’ve yet to see anyone say that the destruction of Our Lady of the Amazon was an instance of misogyny.

Yesterday morning, someone determined that it was acceptable to take a statue of a naked, pregnant woman and throw it into a river. This action was judged not only acceptable, but virtuous and necessary because such a statue in a sacred space is blasphemy. It was claimed that the statue represents a pagan goddess.

Fr. Fernando Lopez, who was part of the group that brought the statue to the synod, spoke to Crux movingly about how the statue represents the Christian God.

“We were all born from a mother, and we all have a mother who was pregnant and delivered us to life,” he told Crux. “It’s a mystery, life itself, that signifies in a way that God is also mother, he’s engendered us and cares for life.”

“We can understand the mystery of life as a great pregnancy of God, who loves us so that he delivered us into this world.”

“Life matters to us all, regardless of our religious beliefs,” he said. “It gives meaning to all of us, and we want our children and the children of our children to continue the dance of life on Mother Earth.”

Asked if it was part of a pagan ritual, the priest offered a flat, “no.”

“There’s something wrong with us if we’re scared by a pregnant woman.”

The statue did not represent an indigenous goddess or even Mary. It represented God himself.

At a synod that explored a greater role for women in the Catholic Church in the Amazon, a statue representing God as a pregnant mother was destroyed because it was judged to be blasphemy. I don’t doubt that the men who destroyed it believed that the statue portrayed a pagan goddess.  It’s part of the network of unspoken assumptions that we have as Catholics that God CANNOT be a woman, and CANNOT be portrayed in a woman’s body. They almost certainly took it as a given that the statue cannot have represented our God if it also represented a pregnant woman.**

Racism and colonialism have absolutely fueled the harsh responses to the Amazonian Synod, but I think we have to recognize the role that misogyny has been playing too. The strong objections to the synod and to indigenous cultures have frequently been responses to imagery that centers women (Mother Earth, God as Mother) and to practices that may give greater influence to women in the Church (the diaconate, married priests).  Yesterday this culminated in a piece of political/religious theater that portrayed a scene of violence against a pregnant woman. This should horrify us.

In speaking to Crux, Fr. Lopez said that there’s something wrong with us if we’re that frightened of a pregnant woman. He’s right.

*Skeptical readers may say, “Aha! Gotcha! The Church isn’t supposed to center indigenous people and women. It’s supposed to center Christ!” And yet, you don’t center Christ by denigrating the humanity of others. Denying the value of a person’s contributions or ability to contribute is a way of denying their humanity. Exclusion is a message that says “you are less than me.”

** It’s not lost on me that even as I identify misogyny in these actions, I wrote above that “the statue did not represent an indigenous goddess or even Mary. It represented God himself.” The resistance to portraying God as female runs deep. 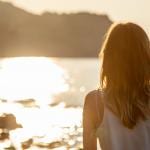 October 1, 2019
What I Learned from Dating a Catholic Priest: Part 1
Next Post 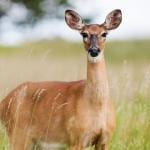 October 31, 2019 Untangling the Bones
Browse Our Archives
Follow Us!

Simcha Fisher reports on a bizarre...
Catholic and Enjoying It!
Related posts from Sick Pilgrim